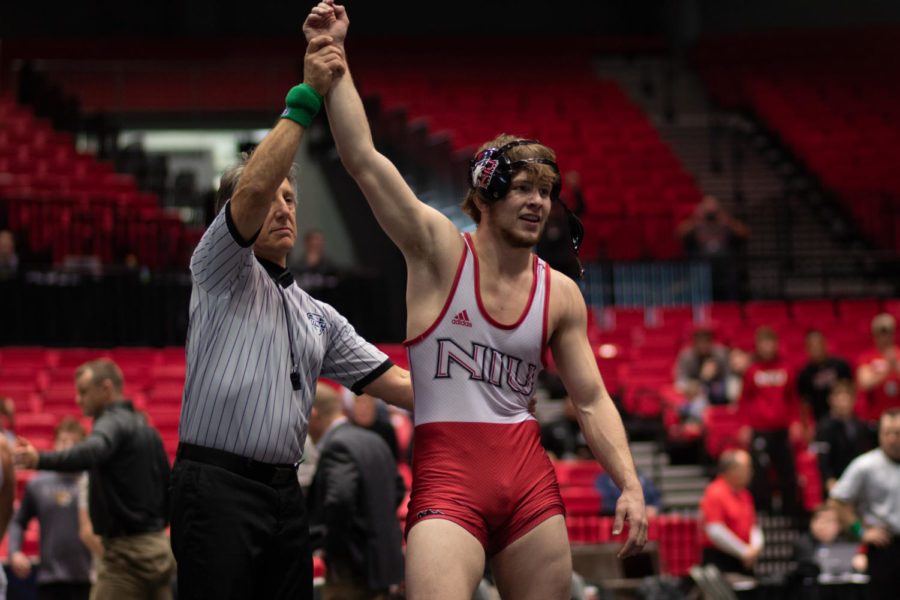 Then-redshirt sophomore Brit Wilson being announced the 2020 MAC 184-pound Champion March 8, 2020 after his win in the 2020 MAC Championship finals at the NIU Convocation Center.

Wilson, a Mexico, Missouri native, is the first NIU wrestler to place in the national tournament and earn All-American status since then-junior Ben Hezier in 2003. Overall in the tournament, NIU wrestlers collected 13.5 team points. Wilson said he hopes his victory will not just propel himself but the program as a whole.

“It feels good to go out and show what we’re doing here at NIU,” Wilson said. “It shows we’ve been working hard. I’m honored to go and do that and I hope to set a standard. Hopefully we get more guys in the future years to get All-American.”

NIU didn’t just make an impact on the mat. Redshirt junior 174-pounder Mason Kauffman was named to the recipient of the NCAA Elite 90 Award, an award given to the athlete at NCAA Championships with the highest cumulative GPA. Kauffman, a kinesiology major, has a 4.0 GPA.

“That award meant a lot to me,” Kauffman said. “I didn’t know I was getting it. It was really cool to get that honor because I know I can’t wrestle forever and I want to take my academics really seriously. I have big goals in what I want to do in the future with my profession. Hopefully the award opens up some doors and opportunities for employers to see that I’m going to be able to give it my all.”

Wilson reached the championship quarterfinals Friday before meeting North Carolina State redshirt sophomore Trent Hidlay. Wilson had the early 1-0 lead until Hidlay took the lead with a takedown in the second. An escape in the final period secured the 3-1 win for Hidlay, the eventual finalist.

In the consultation bracket, Wilson recovered with a pinfall at 2:58 over University of North Carolina redshirt sophomore Devin Kane. Wilson then beat Binghamton University redshirt junior Lou DePrez to guarantee a podium finish and All-American honors.

Wilson was bounced in his next match and then dropped his fifth-place match against Oklahoma State redshirt senior Dakota Geer 6-0 for a sixth-place finish, the same place as Heizer nearly two decades prior.

Redshirt sophomore 165-pounder Izzak Olejnik made an instant splash in his first NCAA tournament appearance. Olejnik knocked off University of Illinois redshirt sophomore Danny Braunagel in the first round with a 6-1 decision.

Olejnik wasn’t done impressing, forcing overtime against the second-seeded Arizona State University redshirt senior Anthony Valencia. Olejnik was taken down in the first sudden victory round for the 6-4 loss. Olejnik would win his first match in the consultation bracket before being eliminated, ending his first NCAA tournament with two wins and two losses.

In their first NCAA tournament appearances, Kaufman and redshirt junior 149-pounder Anthony Cheloni were eliminated in the first round. Both won their first match in the consultation brackets but were knocked out in the next round.

Redshirt junior 133-pounder Bryce West was unable to pick up a victory in his second NCAA tournament appearance, losing two preliminary bouts as the last-seeded wrestler in the weight class.