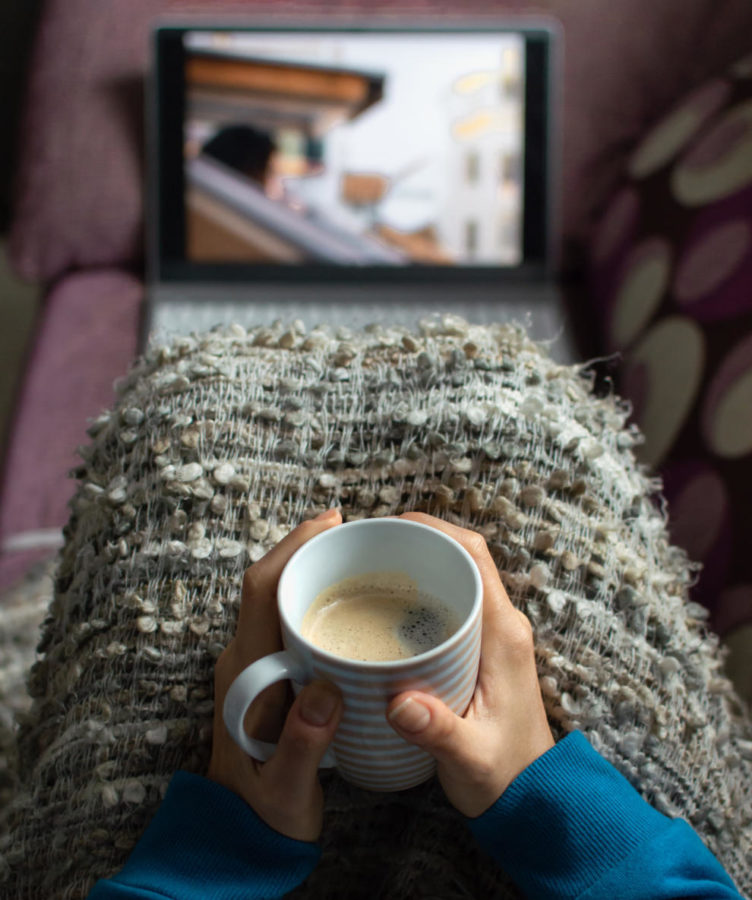 A woman in a blanket sits with a coffee cup watching a video on her laptop.

Nostalgia watching is a term used to describe when people revisit the TV shows and films they loved throughout their childhood. Rewatching entertainment is not only a cozy and comforting experience, but it can also be beneficial for viewers’ mental health.

Nostalgia watching takes people back to a world of familiar content they used to love, and who they used to be when they first watched that content. The reviewing experience creates a calm and positive state of mind, and can even cause viewers to develop new feelings or realizations regarding their past, according to a study published by the University of Chicago Press. In chaotic times such as these, nostalgia watching can take people to a place that feels secure and familiar.

During quarantine, everyone had free time to lounge around and watch TV. While the pandemic changed our world as we knew it, nostalgia watching became a commonplace method to self soothe and a healthy way for people to cope.

When viewers revisit the shows involving characters they know and love, they can connect deeper with the characters. Viewers can feel as though they are interacting and relating with those characters, which is helpful during a pandemic when many are isolated and limiting interactions outside the home.

Indulgences in works of fiction require a suspension of disbelief; in order to enter surreal fictional works of TV, film and books, people dismiss logic. When people allow themselves to let their guard down and emotionally enter the world of content, they can become fully invested in the nostalgia it brings.

“I think it’s generational,” said Professor of Communications Matt Swan. When college students and twenty-somethings nostalgia watch, they are most likely viewing material from the 80s and 90s.

“I think it always reminds us of how life always seems simpler when you are a child. The values were much more recognizable, and we’re able to remember that life does not have to be as hard as it is right now,” Swan said.

With the chaotic nature of present reality, transporting back to a simpler and comforting place through media allows people to feel some sense of self-control, according to psychologists. No matter how old the viewer is, the material people consume has the ability to shape and influence them. Nostalgia watching is a reflection of time. As viewers rewatch material, it reminds them of the child they used to be back at first viewing.

Nostalgia watching, a psychologically beneficial form of leisure, can also help us cope with the current complexity of the world. Healthy coping mechanisms like nostalgia watching allow people to center themselves during difficult times. Now that media is the most accessible it’s ever been, it’s comforting to know there are simple forms of human connection that can come from revisiting the movies and television from the past.