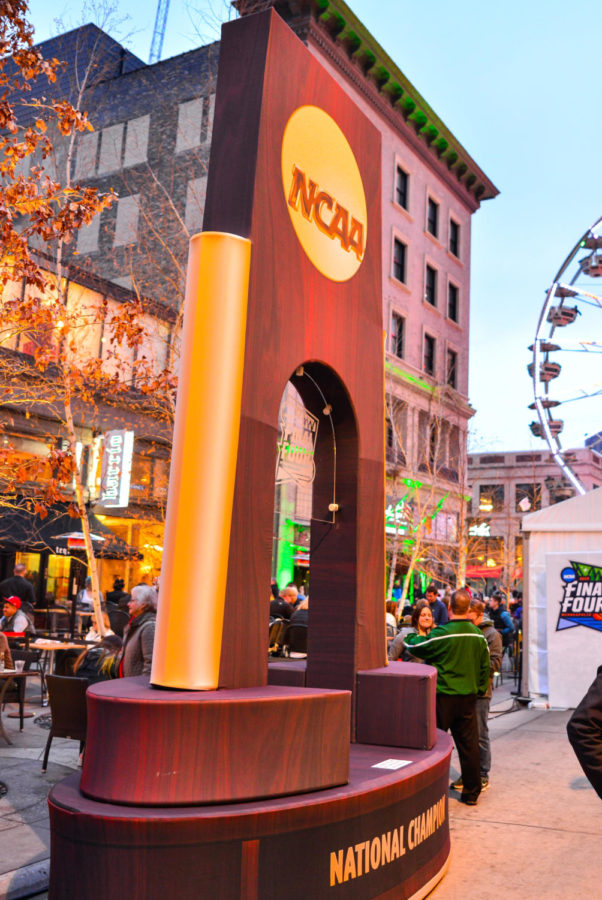 Minneapolis, MN, USA. 4/6/2019: Entertainment in Minneapolis, Minnesota for the NCAA Final Four Basketball Tournament on Nicollet Mall. Signage on the the street.

Through the first two rounds, all the one seeds remain including women’s basketball powerhouses of UConn, the University of South Carolina and Stanford University.

Though the blue-chips remain, a Cinderella story has emerged. The University of Michigan Wolverines upset the University of Tennessee Volunteers Tuesday 70-55, punching the Wolverines their first ever ticket to the sweet-16 in the women’s program history.

Wolverines Head Coach Kim Barnes Arico, who took St. John’s University women’s basketball to its first ever sweet-16 appearance in 2012, embodied what it meant to reach this stage in the women’s basketball championship. Arico brings one of the most known brands in college athletics into the forefront of women’s athletics.

Barnes Arico has begun to put Ann Arbor on the map for women’s basketball. On Saturday, the Wolverines will have another opportunity to stamp their names into history when they take on the second ranked Baylor University Bears in the sweet-16.

The University of Oregon made early waves as teams entered the NCAA bubble when Ducks forward Sedona Prince posted TikToks revealing the shameful excuse for conditions the NCAA had provided for the female athletes.

Prince has now turned the headlines to her play on the hardwood as the Ducks have advanced to their fourth straight sweet-16 appearance. Prince opened her tournament with 12 points, seven rebounds and three assists against the South Dakota University Coyotes.

Prince was the driving force behind the NCAA bending to the will of the masses. Her tweets and videos have been socialed more than 200,000 times since being posted and created a national conversation about equality in college athletics.

“It’s amazing that now I have such a big platform,” Prince said in a Wednesday news conference. “I hope they see women’s basketball is not boring. It’s such a different game, so we wanted to show that we’re fun to watch.”

Though ratings have not been released yet for TV viewership, Twitter references of the NCAA Women’s tournament are up almost 90% during games compared to two seasons ago, according to ESPN.

Sweet-16 games begin Saturday, with all eight games being played across Texas. March 29 will set the stage for the Final Four in San Antonio as the Elite Eight will be contested.