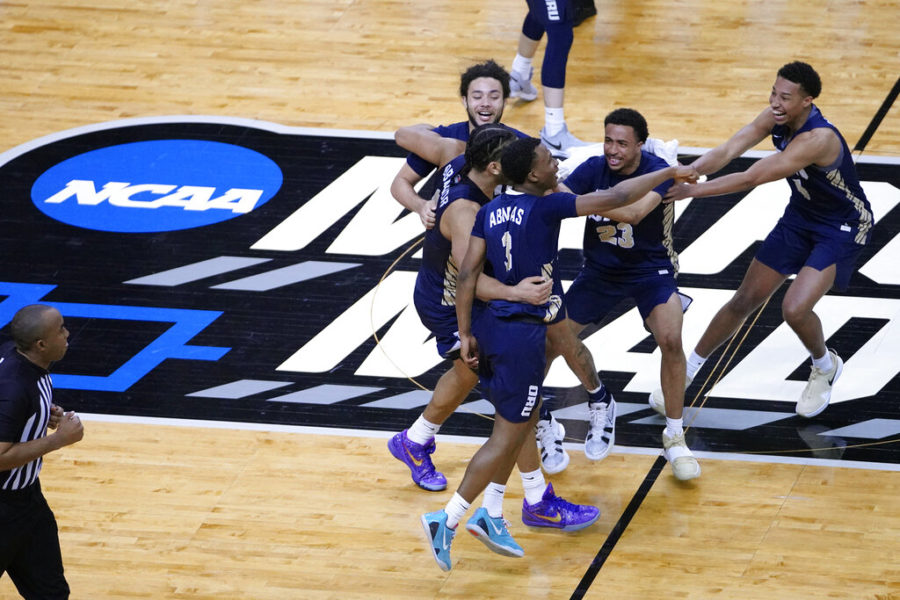 Oral Roberts University players celebrate at the end of a college basketball game against the University of Florida March 21, in the second round of the NCAA tournament at Indiana Farmers Coliseum in Indianapolis.

The first round of the NCAA March Madness tournament gave some of the best moments and upsets in recent memory. The Round of 64 kicked off the tournament with an unreal nine upset wins over Friday and Saturday.

The second round of the NCAA tournament brought with it plenty of shockers as the upset wins just kept coming. The most surprising upset of the round came from the same Cinderella story from the Round of 64.

The biggest upset was Oral Roberts University Golden Eagles in the 15th seed in the South division upsetting one of the Final Four favorites, second seed Ohio State University Buckeyes.

The Golden Eagles came in as huge underdogs for the matchup and were expected to just be happy going to the tournament in the first place. Well Oral Roberts didn’t get the memo. From the jump the team was playing extremely well, scoring at very high rates,  thanks in part to the play of junior forward Kevin Obanor who scored a game-high 30 points for the Golden Eagles.

With all that being said, the game still went into overtime, and with the Buckeyes down three they still had a chance to tie it. They got a great look at the top of the key for junior guard Duane Washington Jr. who couldn’t connect, sending Oral Roberts to the Round of 32.

The upsets would just keep coming for the weekend as we saw the 11th-seeded UCLA Bruins, who beat Michigan State Spartans just to get into the Round of 64, defeat  the sixth-seeded Brigham Young University Cougars.

The 14th-seeded Abilene Christian University Wildcats defeated third-seeded University of Texas Longhorns 53-52 in one of the most thrilling matchups of the tournament so far.

Even the Mid-American Conference got in on the upsets with 13th-seeded MAC champions Ohio University Bobcats getting the major upset over the defending-tournament champions, the University of Virginia Cavaliers. The Cavaliers, whose offense just never seemed to click, shot just 35% from the field and 25% on 3-pointers.

15th seed Oral Roberts University Golden Eagles played the role of upset kids again after they took on seventh-seeded University of Florida Gators. The Golden Eagles won their most-important game in program history, as they became the second 15th seed to ever make the Sweet 16.

This round also saw the first one seed go down, as the University of Illinois at Urbana Champaign Fighting Illini were upset by another Illinois team in  eighth-seeded Loyola University Chicago Ramblers. The Ramblers took an early first-half lead they would never relinquish. The loss was crushing for the Fighting Illini, as they were heavy favorites to win the tournament, a disappointing ending for an impressive season for the Big Ten champions.

March has not been a good one for the Big Ten as it came in with the most bids of any conference for the tournament with nine teams making it. After completion of the first two rounds, the only remaining team is the University of Michigan Wolverines who took care of business against the Louisiana State University Tigers.

One of the toughest remaining Big Ten teams were the University of Iowa Hawkeyes, the second seed who were defeated by the seventh-seeded University of Oregon Ducks. The Ducks advanced to this game due to COVID-19 concerns with their previous opponents in the first round.

Of the remaining teams, there aren’t many of the “usual suspects” left half way through the tournament. One of the usual Blue Bloods of the tournament, the University of Kansas Jayhawks, were taken out of the tournament by the sixth-seeded University of Southern California Trojans who played a dominant game, going up 40-21 at half and completely taking all the energy from the Jayhawks.

Another upset saw the University of Oregon Beavers defeat the Oklahoma State University Cowboys by 10 points. The Cowboys were looking to make a big run in the tournament with a top NBA prospect freshman guard Cade Cunningham. Cunningham had a team-high 24 points in the game, but couldn’t do enough to keep his team in the tournament.

The tournament continues at 1:40 p.m. Saturday and Sunday.The first of the Sweet 16 matchups will be Loyola University of Chicago vs Oregon State.