Final Four was one for history books 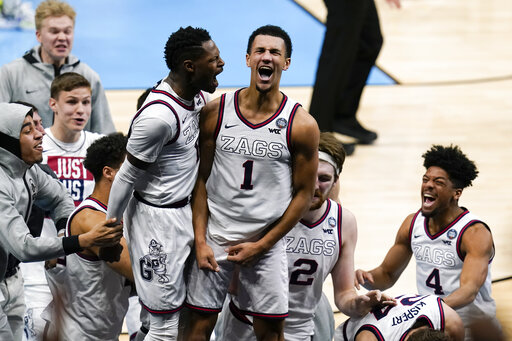 The Final Four gave us one of the most spectacular moments in tournament history. The first-seeded Gonzaga University Bulldogs defeated the 11th-seed University of California–Los Angeles Bruins on a last-second buzzer beater in overtime.

It was the Bulldogs’ top player and the number three overall prospect, first-year guard Jalen Suggs, who banked in a 3-pointer from two steps past half court to send the Bulldogs to the National Championship game, winning by a score of 93-90.

Of all the teams to play the Bulldogs in the tournament this year, the Bruins put up the toughest fight, being the only team to lose by single digits to the Bulldogs. The Bruins kept it close all game with the play of sophomore guards Johnny Juzang and Jaime Jaquez Jr. They were the Bruins’ leading scorers with Jaquez Jr. having 19 points, but it was Juzang’s play that gave the Bruins a chance to almost pull off the upset as he had a game-high 29 points.

Juzang was hitting every clutch shot for the Bruins and was their go-to down the stretch, tying the game at 90-90 with just three seconds left. Suggs would go on to hit the buzzer beater, putting away Juzang and the Bruins. The Bulldogs will look to become the first team since 1976 to have an undefeated season ending with a championship, but their opponent for the matchup will be trying to put their name in the history books as well. The only remaining one seed, the Baylor University Bears will meet the Bulldogs to decide the championship after the Bears defeated the University of Houston Cougars Saturday in a blowout victory.

The Bears got a comfortable lead early on in the first half and held onto it for the entirety of the game. The Bears’ defense was shutting down any type of production from the Cougars as they struggled to get any offensive rhythm going. There were only two Cougars that scored in the double digits. Sophomore guard Marcus Sasser scored a game-high 20 points, but it wasn’t nearly enough to keep his team in the game.

The Bears played a great all-around team game as five different players scored in the double digits with their bench outscoring the Cougars 32-11. With the Bears getting scoring from all areas on the team and playing suffocating defense, they were able to move on to the championship, winning by a final score of 78-59.

The storylines write themselves for this National Championship matchup as the Baylor Bears are making the school’s first appearance in the championship game since 1950, and looking to be the first men’s basketball team to win a national title in school history.

For the Bulldogs, they were in this spot four years ago when they lost the 2017 title game to the North Carolina Tarheels. Along with being the first undefeated national champions since 1976, the Bulldogs are also searching for their first championship in program history.

All the stakes are on the line for these two teams having their best seasons in program history, and it will all come down to the game which will be aired 8:20 p.m. Monday on CBS, at Lucas Oil Stadium in Indianapolis, Indiana.