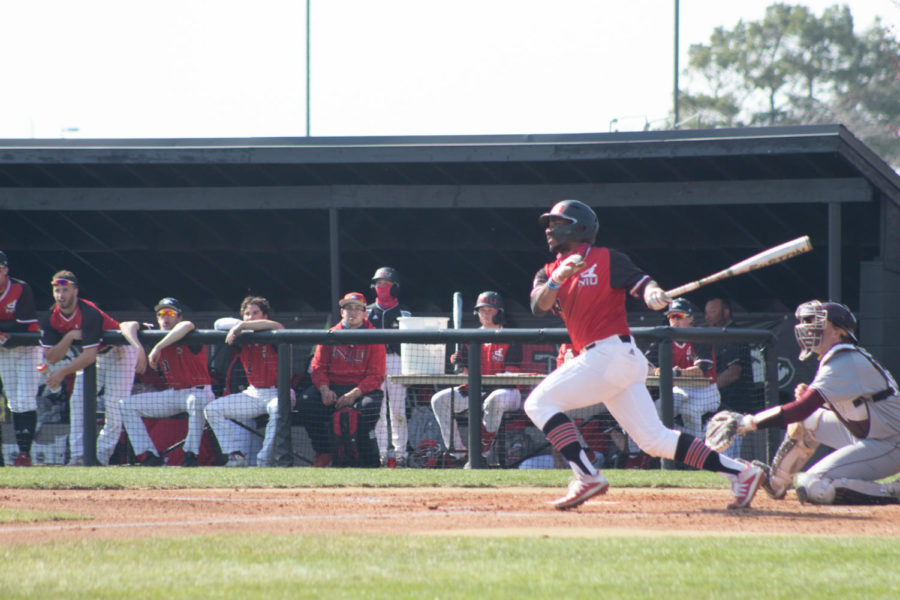 Redshirt junior Kam Smith begins to takes off from home plate after making contact with the ball April 3, during NIU's 17-6 loss to Central Michigan University at Ralph McKinzie Field in DeKalb.

The Huskies pitching and defense struggled throughout the homestand, giving up double-digit runs in three of the four contests.

Head Coach Mike Kunigonis isn’t panicking at the Huskies conference record of 4-8 to start the season. He said he still saw great things from his team in the series.

“We saw great things all weekend out of our pitchers, hitters and defense but we haven’t been able to find a way to put all three phases of the game together at the same time,” Kunigonis said in an NIU Athletics news release. “We’ll get back to work on Tuesday and continue to work towards getting better. It’s still very early in MAC play.”

The Huskies home opener was a defensive struggle early, with no score through the first six innings. NIU junior pitcher Michael Lasiewicz didn’t allow a hit in the first five and a third innings, but did walk or hit four batters.

In the seventh, the Chippewas got on the board with a sacrifice bunt by junior infielder Mario Camilletti to score a run. Lasiewicz would ultimately be pulled in the eight after allowing an RBI double to sophomore outfielder Garrett Navarra.

After adding two more runs in the eighth, the Chippewas put the nail in the coffin with an explosive seven-run ninth inning. Sophomore pitcher Erik Hedmark gave up six of those runs, first off a two-RBI double to junior Chase Rollin.

After Navarra added two more with a two-RBI single, redshirt first-year infielder Nick Dardas brought two more home with a single and error by the Huskies. Hedmark also got tagged for the final run of the inning after first-year pitcher Spencer Hill walked a batter with the bases loaded.

The Huskies only managed five hits on the day, all given up by CMU’s junior starting pitcher Jordan Patty. The Huskies failed to reach base in the final two and two-thirds innings.

The Chippewas didn’t take long to take the lead, with Camilletti scoring an RBI single to right in the second inning. Another run scored on a fielding error made it 2-1 at the end of two.

After allowing the two runs in the second, sophomore pitcher Brandon McPherson put it into high gear and sat down the next nine batters before being pulled in the top of the fifth.

The Huskies out hit the Chippewas seven hits to four but failed to bring runners home until they were down to their last out with the bases loaded. Senior outfielder Matt Barnes beat out a throw to first, bringing home redshirt senior catcher Jake Dunham. Senior outfielder Brendan Joyce needed just one run to tie, but a flyout ended the game 2-1.

After a Rollin two-run homer in the first for CMU, Joyce redeemed himself from his game one game ending flyout. With a full count, Joyce homered in the second to bring home redshirt senior outfielder Kam Smith for a 2-2 score.

First-year pitcher Connor Langreder struggled in his three and two third inning start. After loading the bases on three walks in the third, Langreder gave up a triple to Navarra to bring home three runs.

In the fourth, Langreder was pulled after a bases loaded walk to give the Chippewas a free run. He ended the game with seven walks and was replaced by senior pitcher Ryan Anderson.

The Huskies added a run in the fourth on a popout RBI by junior infielder Alex Rodriguiez. Following a scoreless fifth, the Chippewas took advantage of a rattled NIU defense. Anderson allowed three hits, walked two batters and threw a wild pitch that allowed runners to advance before he was pulled. In total, CMU added six runs in the sixth.

CMU poured it on in the seventh, putting the game out of reach with five more runs. Redshirt sophomore Jack Anderson hit an RBI triple in the bottom half of the inning and was brought home on a sacrifice fly by first-year catcher Jacob Schroeder to make the final score of 17-6.

After seeing CMU bats erupt the day prior, NIU were the ones with the hot hand early. Dunham had arguably the best game by a Huskie this season, hitting four-for-five and scoring five RBIs.

Dunham got his first two RBIs in the opening inning on a double. A sacrifice bunt by sophomore outfielder Nick Drobushevich, a single by Barnes and a triple by senior infielder Dylan Lonteen made it 6-0 at the end of the second inning.

CMU quickly bounced back thanks to a four-run third inning that was spearheaded by a bases-loaded triple by senior outfielder Zach Gilles. Another run in the fourth made it 6-5.

Dunham extended the Huskies lead with another RBI, but CMU eventually pulled even at 7-7 in the seventh with a two-RBI single by Navarra. Navarra would not only finish the game with three RBIs but would also earn the pitching win in a relief effort.

The Chippewas took the lead for the first time in the game with an RBI flyout by Rollin, followed by a two-RBI single by redshirt sophomore infielder Justin Simpson. The score midway through the seventh was 10-7

Dunham’s fourth and fifth RBIs of the day put NIU back within one, but it was fielding that would put the Huskies behind for good in the ninth. CMU scored a pair of runs off errors by Rodriguez at shortstop to make it 12-9 heading into the bottom half of the inning.

In the ninth, junior catcher Morgan Holmes’ flyout brought Smith home for his third run of the day. Smith finished two-for-four with three runs, as did Barnes, to extend a now 10-game hitting streak.

Smith’s run was the teams only of the ninth, leading to the 12-10 final.

NIU’s record overall now stands at 5-18, with their 4-8 Mid-American Conference record putting them only half a game ahead of the last place University of Akron Zips. This coming weekend will give the Huskies a break from MAC play as they travel to Carbondale, Illinois for three non-conference contests.