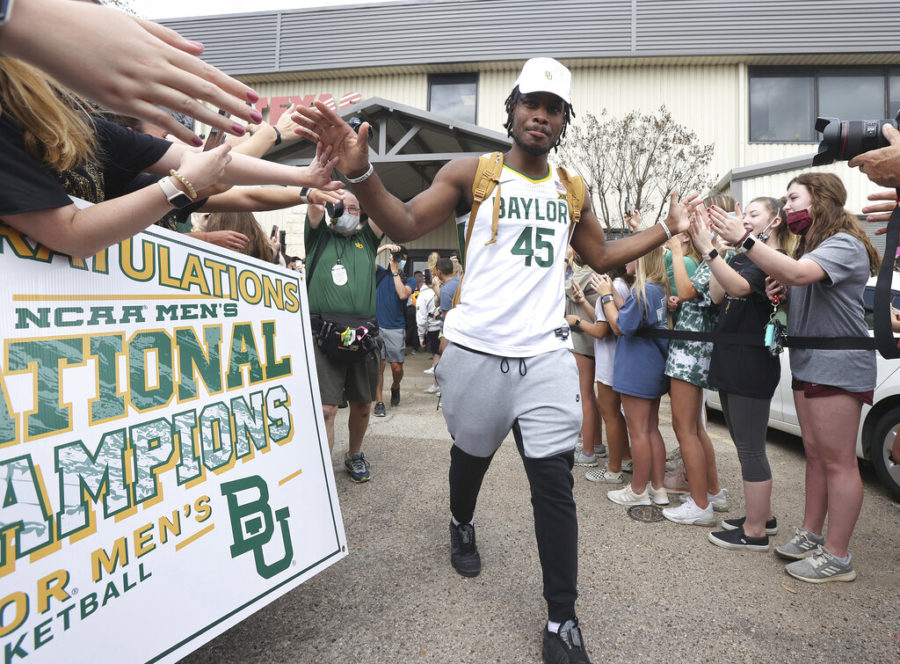 The University of Baylor Bears men’s basketball team won its first NCAA National Championship in program history after playing a dominant game against the University of Gonzaga Bulldogs, winning by a final score of 86-70 Monday night.

The Bears played at an elite level on the offensive side.Junior guards Davion Mitchell and Jarius Butler got the game started with the duo scoring four straight baskets, getting out to one of best starts in recent championship history with an early 9-0 lead.

The lead would continue to grow throughout the half as the Bears were not only scoring at will, but were also playing amazing defense and causing the Bulldogs to turn the ball over seven times in the first half. The Bears’ defense was very special to see as they slowed down Gonzaga’s top two players, first-year guard Jalen Suggs and sophomore forward Drew Timme, who both seemed a little shell-shocked from the swarming defense the Bears brought.

The Bears’ lead grew as big as 20 points in the first half before the Bulldogs were finally able to adjust by getting back to the offensive rhythm which drove them to the Championship. The Bulldogs started to attack the basket once two of the Bears’ forwards got into some foul trouble. The Bulldogs began cutting to the basket and were able to get some easy layups and get to the line for free throws.

It would be the Bears again who got out to another hot start in the second half, as Butler hit back-to-back 3-pointers to get the offense rolling again for the Bears, to push their lead back up to 14.

The Bulldogs tried to make one more run after this with Suggs trying to bring the team back, hoping he could have one more March Madness moment as he scored six straight points for the Bulldogs. The rest of his team wasn’t able to do much against the Baylor defense.

The Bears locked back down after the run by Suggs as they had a big defensive presence from sophomore forward Jonathan Tchamwa Tchatchoua. The 6’8 forward stood his ground well and got a body in the way of the cutting Bulldogs.

The most glaring stat from the night came from the rebounding department. The Bears, who started three guards in the game, out-rebounded the Bulldogs 38-22 for the game. Senior guard Mark Vital, who checks in at 6’5, was all over the glass for the Bears. Vital grabbed 11 rebounds, including eight offensive rebounds. Vital’s play completely demoralized the Bulldogs as he created many second-chance opportunities for Baylor.

The game ended in fitting fashion as the Bears stole a pass and dribbled the clock out, bringing a championship to Waco, Texas. It’s a huge feat for the school which has had multiple scandals over the years, including the men’s basketball program, but all that changed with the hiring of Head Coach Scott Drew who took over in 2003. He had visions of what the team could accomplish.

“We came to win games at the NCAA tournament,” Drew said in his introductory press conference in 2003. “We came with a chance to win a National Championship at Baylor University and that’s my goal here.”

Despite being given a program that has gone through many adversities, it’s great to see Drew so confident to fulfill on a promise he made nearly 20 years ago. Congratulations to the 2021 Men’s Basketball National Champions, the Baylor Bears.