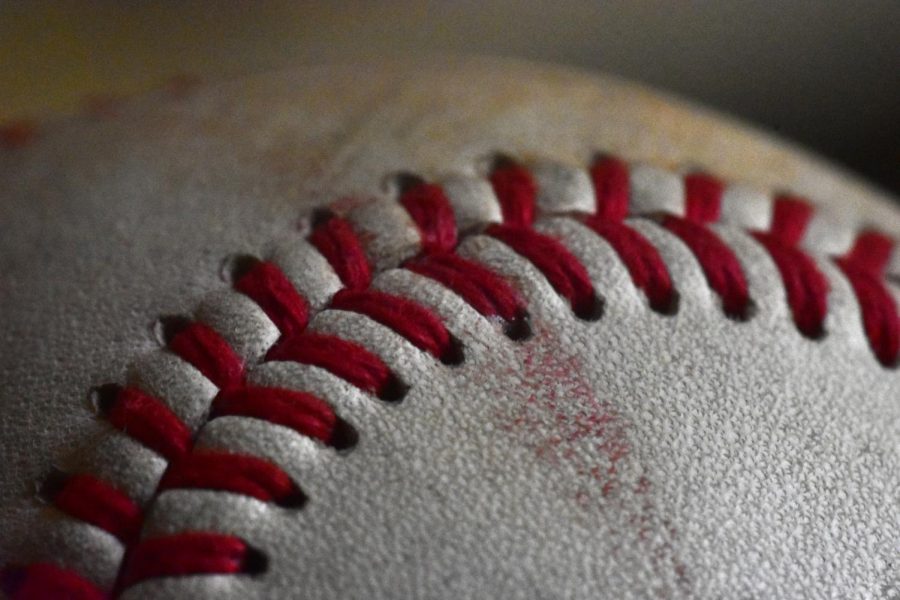 Close-up view of a baseball.

DeKALB — NIU baseball’s skid continued into a non-conference weekend of games, losing a one-off to Bellarmine University Friday and a pair of games to Southern Illinois University-Carbondale Saturday and Sunday.

The Huskies losing streak is now at seven games, with NIU dropping 10 of the last 11 games. Head Coach Mike Kunigonis said his team has to play at an improved level as they return to Mid-American Conference play starting Friday.

“We have to be better and we will be better, starting next weekend against Ohio,” Kunigonis said in a Sunday NIU Athletics news release following an 8-4 loss to SIU.

The Huskies’ four runs were all produced off solo home runs by sophomore outfielder Nick Drobushevich and redshirt senior outfielder Kam Smith. The lead-off man Drobushevich homered in the game’s opening at-bat to give NIU a 1-0 lead.

The Huskies struggled to bring home runs despite racking up hits. In total, NIU left seven runners stranded over the course of the game. Redshirt senior Jake Dunham went three-for-three batting on the day but never scored.

In the fifth inning, Drobushevich homered again to lead off the inning and Smith added another run with a solo homer. The Knights cut into the lead in the bottom of the fifth with an RBI double by senior outfielder Chris Gambert to make it 3-1.

Junior pitcher Michael Lasiewicz handled the Knights well early, only giving up one run and striking out eight batters after five innings. In the sixth, after runners reached second and third, the Knights put another run on the board with a groundout RBI by junior outfielder Matt Higgins.

Lasiewicz was pulled in the seventh after giving up three hits, a run on an error and loading the bases. With the game tied, Knights first-year first baseman Davis Crane doubled to bring two runs home and give Bellarmine the lead. Senior catcher Alex Cleverly added another run to make it 6-3 at the end of the seventh.

Smith homered for the second time to lead off the eighth and a last homer by Bellarmine junior outfielder Jacob Mulcahy made it the 7-4 final.

NIU got a run on the board in the third off a double steal in the third, but the 20-win Salukis of the Missouri Valley Conference weren’t down for long. SIU sophomore outfielder Vinni Massaglia homered in the third, followed by a pair of RBI doubles to make it 3-1 for the hosting Salukis.

The Huskies bounced back with a six-run fourth inning. After Smith homered for the eighth time this season, NIU junior catcher Morgan Holmes hit a two-run shot to left to continue the run. NIU first-year infielder Jack Blazevich and senior outfielder Brendan Joyce added groundout RBIs. Smith hit another RBI to make it 7-3 after four.

Joyce hit a two-RBI single in the fifth to further extend NIU’s lead to 9-3. The Salukis hit a pair of homers in the sixth to shrink the lead, including a three-run long ball by senior infielder Phillip Archer.

The Huskies added three more runs in the seventh with a sac bunt by Joyce and an RBI double by Drobushevich. SIU answered with a sacrifice fly to make it 12-8 heading into what would be a crucial eighth inning.

With sophomore pitcher Erik Hedmark stepping on the mound in a relief effort, NIU let the Salukis take back the lead. After two RBI singles and a sacrifice fly to make it 12-11 NIU, SIU junior outfielder J.T. Weber hit a full-count double to right field to score the tying and go-ahead run.

The Huskies got a potential tying run on base in the ninth with a hit batter, but failed to bring it home, falling 13-12. The loss is their second of the season where the Huskies scored double-digit runs and still came away with a loss.

SIU got the early advantage in the last game Sunday. SIU senior infielder Ian Walters scored two runs on a single to center field in the second inning.

NIU got on the board with a double steal in the top of the third, then tied the game off an RBI single by senior infielder Dylan Lonteen. The Huskies took the lead off a sacrifice fly by Dunham.

In the bottom half of the third frame, SIU tied the game on a double by Massaglia and took back the lead for good with a sacrifice fly from Archer. Massaglia and Archer added more RBIs in the fifth inning, hitting a flyout and single respectively to extend the lead.

SIU extended its lead with runs in the sixth and eighth. NIU could only manage a ninth-inning home run by Joyce, his first of the year, to make the final 8-4.

NIU’s record stands at 5-21, finishing its non-conference schedule of 14 games with only one victory. A rebound in a home series, starting Friday, against the Ohio University Bobcats can put them back on track in the MAC standings.

The Huskies open their four-game home stand against Ohio at 2 p.m.  Friday at Ralph McKinzie Field in DeKalb.