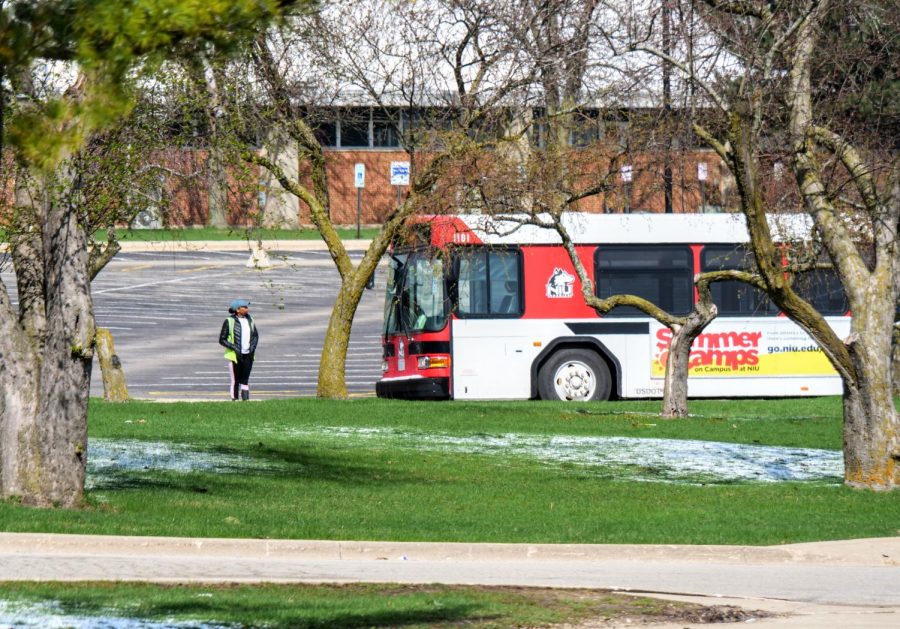 NIU Bus driver looks around an empty campus before continuing their route.

DeKALB – The DeKalb City Council turned down a resolution at Monday’s meeting for the architecture and engineering design of a city transit facility due to the planned location along Dresser Road.

The resolution for the city-owned transit facility was planned along Dresser Road, neighboring the DeKalb County Health Department and DeKalb High School, 501 W. Dresser Road. The land is 30 acres in size with approximately 15 usable acres for a transit operations and maintenance facility.

However, many council members voiced their opposition to the site’s location due to it being close to a neighborhood and the DeKalb High School.

First Ward Alderperson Bill Finucane suggested a site along Peace Road may be a better-suited location for the transit facility.

“When we first discussed this back in December, I expressed some opposition to this site,” Finucane said. “Part of it was because of the wetland; part of it though, is I’m not really sure it’s the best location for it.”

The defeated resolution included a $1 million agreement with Stantec Architecture, Inc. for the architectural and engineering design work on a transit maintenance and operations facility capable of housing all the transit assets in DeKalb, according to the April 12 City Council agenda.

Sixth Ward Alderperson Mike Verbic said the location could be used as a recreational site in the future instead.

“Whether it’s a partnership with the park district, it seems like there’s potential for that, but I would agree with my colleagues on council that I have no objection to Stantec services whatsoever, but from a standpoint of location, this is not good.”

Because the resolution was defeated, City Manager Bill Nicklas said the city will talk with Stantec Architecture about a new, less expensive agreement. The company will come up with other location options for City Council to consider.

“At this point, what I’d suggest is that [Stantec] has been working around the area; they probably have an idea of some sites,” Nicklas said. “They’re going to come back to you – just with their proposal, not with their sites – to go and do some investigation for ‘X’ days and bring it back to you. That’s what we’re looking at.”

Council members approved an ordinance to extend the time limit to July 1, 2022, to obtain a state-issued cannabis dispensary license for NuMed Partners. The business hopes to use the permit for an adult-use and medical cannabis dispensary at the Junction Shopping Center, 818 W. Lincoln Highway.

Laura Jaramillo Bernal, director of special projects at NuMed Partners, said the business hasn’t been able to obtain a state license due to COVID-19 and lawsuits against the state related to the process of getting approved.

NuMed Partners is an Illinois-based pharmaceutical grade cannabis producer and retailer and currently operates three medical and adult-use cannabis dispensaries in Chicago, East Peoria and Urbana, according to the agenda.

“Our plan is, as soon as licenses are announced, to move forward immediately with permitting, designing and getting ready to do a build out so we can open our doors to the public as quickly as possible,” Jaramillo Bernal said.