NIU opens spring with hopes of improvement off disappointing 2020 season. 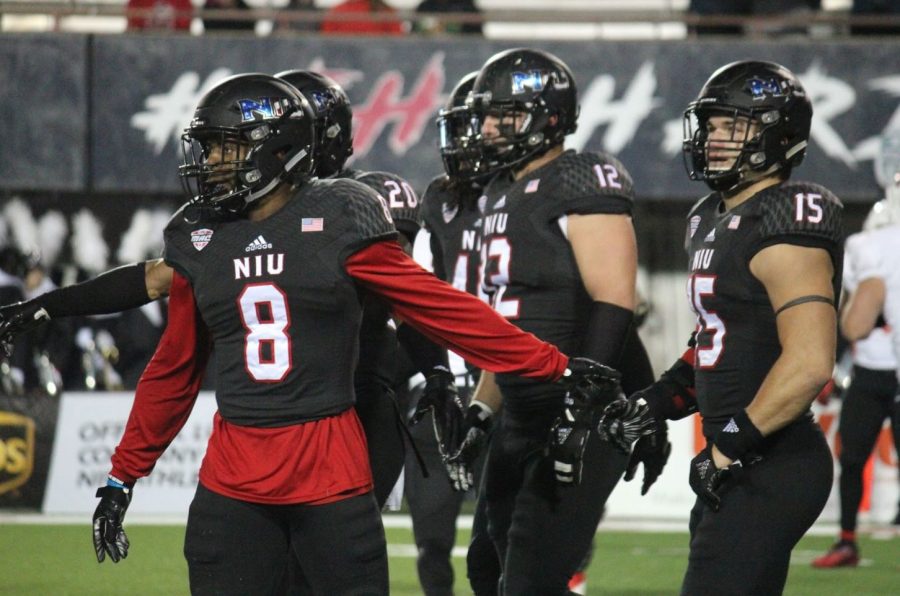 DeKALB — The football team hosted its first open practice of the offseason Saturday. The Huskies played a scrimmage against each other in its annual Cardinal vs. White game, showcasing the young up-and-coming talent that the team has for the 2021 season.

Nearly two hundred family members and fans in attendance came out for the spring showcase to show their support for the team while socially distanced.

The scrimmage started at 11 a.m. with skill warm-up drills where the team split off into individual groups by position and worked on different techniques to get the day started.

After the 15-minute warm up, the team got together for a group stretch and split off on their own sidelines. Practice consisted of going through several different game situations the team could find themselves in throughout the season.

The defense had the offense’s number for much of the practice. The weather did play a factor in the offense’s struggles with a wet ball causing multiple drops and loose balls the defense was able to capitalize on.

The defense disguised their coverages very well, causing multiple turnovers on the day.

“That’s excellent work by the defense. We want to get the ball,” Head Coach Thomas Hammock said. “The defense made plays and that’s what we want to do. We want to take the ball away and make plays.”

Hammock also highlighted multiple players in the defensive secondary who really showed out during the practice.

“You look at the two safeties, Devin [Lafayette] and [Jordan] Hansen, Josh Earl made a nice play,” Hammock said. “Then our corners are playing excellent, guys like Myles McGee, Eric Rogers, Jordan Gandy, Zhamaine March made the play at the end of the day.”

With the defense playing at such a high level, it was hard for the offense to really get going throughout much of the practice.

The Huskie offense did have its moments, led by redshirt junior quarterback Rocky Lombardi, one of the most notable transfer athletes to come to NIU in recent years. The transfer quarterback coming from Michigan State University said he chose Northern Illinois because of the culture and production the team has had over the years.

“I was looking at a lot of places that would highlight some of my best qualities and a place where I could really fit in with the offense and secondly I wanted a place where I felt like I could succeed, and I feel really good about this team,” Lombardi said.

The offense did have some good plays during practice with Lombardi hitting on some deep throws to redshirt first-year wide receiver Fabian McCray towards the second half of the team’s 11-on-11.

The offense will take some getting adjusted to for Lombardi, but it’s not out of his comfort zone.

“It’s been good, this will actually be my fourth offense now in five years,” Lombardi said. “I’ve had four different offensive coordinators so I have learned a lot of football in my day. Coach [Eric] Eidsness has done a great job of teaching me how to understand, interpreting the offense, and with checks. I’m getting a lot more comfortable every day.”

That comfort level will be key for the Huskie offense to unlock their full potential this season. Throughout the day, the offense got into a rhythm as the practice went on. Lombardi’s interceptions came early on in practice, but they kept pushing, trying to improve and capitalize on what their offense can be.

The team, unlike 2020 due to the season getting pushed back because of the COVID-19 pandemic, will get a full offseason of preparation to get ready for the 2021 season.

“The normalcy of the preparation fills back to what we need to be doing and I think for us we needed that development,” Hammock said. “We needed that growth. We needed that offseason and we’ve taken full advantage of that and our kids have responded great to it.”

It’s an exciting time for all Huskie fans looking forward to the upcoming season to see how far this team can go. Fans will have one more opportunity to see the team in action 11 a.m. Saturday. The team will wrap up with spring football at the end of April, and players will be going home for a month before returning for summer camp in early June.