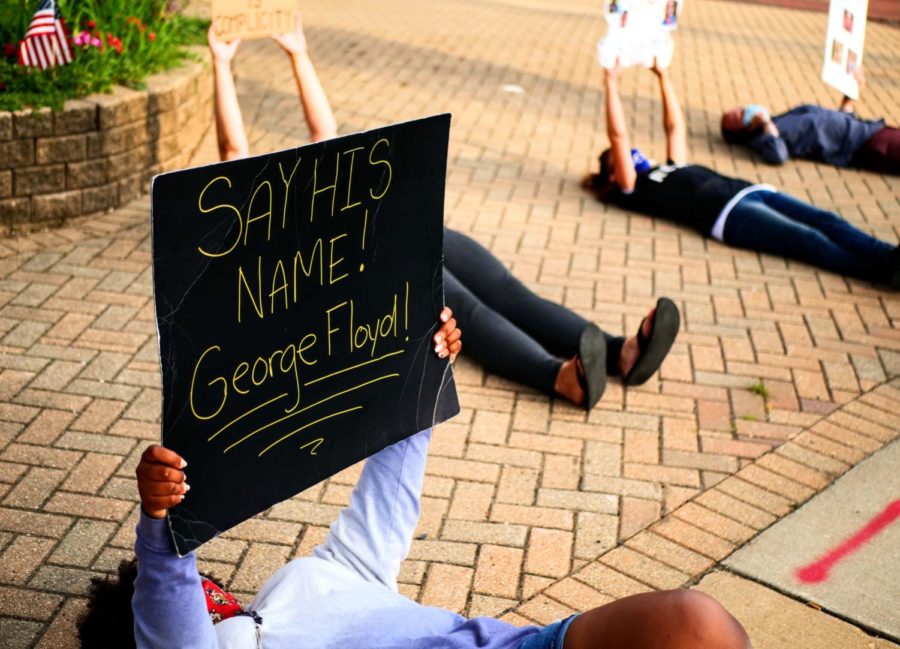 A DeKalb protester holds a "Say his name! George Floyd" sign in Summer 2020.

DeKALB – Derek Chauvin was recently convicted for the murder of George Floyd, and many Black Americans are feeling relieved and hopeful for the future.

“I certainly believe that justice has been served,” said Jaylan Peebles, president of NIU’s Black Student Union. “It is a huge step in the right direction, but this can not be an end-all, be-all. We still have a long way to go.”

On May 25, 2020, former Minneapolis Police Officer Chauvin and three others arrested Floyd under the pretense of using a counterfeit $20 bill. Chauvin proceeded to kneel on Floyd’s neck for over 9 minutes as Floyd yelled, “I can’t breathe,” and ended up losing his life in the process. A video filmed by a bystander brought the case to national light.

“I honestly did not believe that he would get a guilty verdict up until they said he was guilty,” said Devlin Collins, NAACP president and incoming SGA president. “Every step of the way, I still thought it was a possibility that he was going to get off as innocent or that there would be a mistrial…but at the end of the day, I am happy with the verdict.”

“The officers who were with him definitely need to be arrested as well,” Peebles said. “Justice was served, but only to an extent.”

Police brutality against Black people is nothing new in the country, but Peebles and Collins hope that the verdict and circumstances around the case will help influence ones like Chauvin’s in the future.

“I feel like officers who do partake in police brutality will be more accustomed to being on camera in the future,” Peebles said.

Darnella Frazier, 18, filmed Floyd’s death on her phone and uploaded it to Facebook, where it was viewed millions of times. The murder of Floyd erupted with protests across the county with calls for police reform throughout the summer.

“I definitely believe this serves as an example of the progress we have gotten to,” Collins said. “There were all these factors that show that people do care and that he was in the wrong. A lot of people have been saying that this is just the first of many; this is the first to come. There needs to be more accountability, more instances like this where police departments want to show that they are not going to tolerate officers just going off and not taking accountability for their actions.”