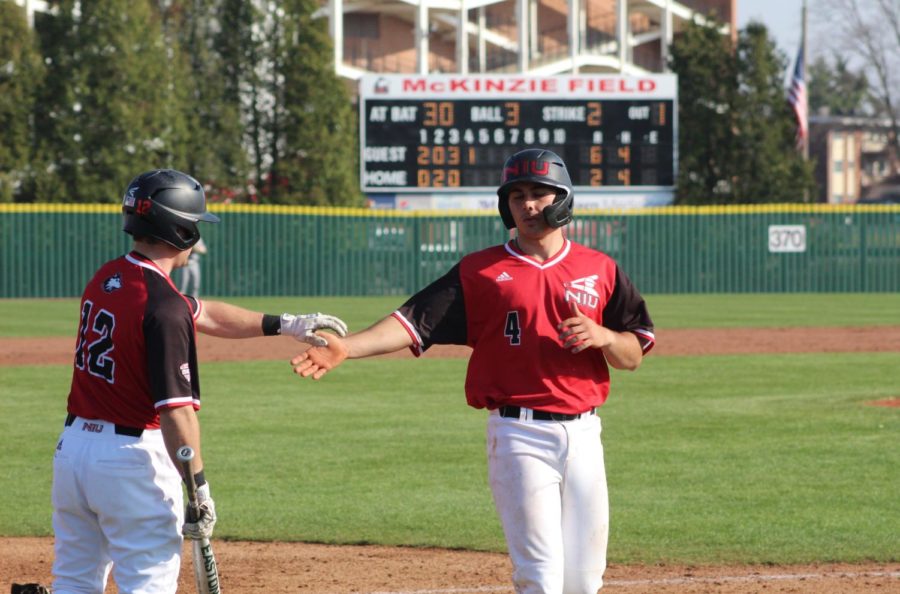 Redshirt senior catcher Jake Dunham (right) recieves a high-five after scoring a run in the second half of an April 3 doubleheader against the Central Michigan Chippewas at Ralph McKinzie Field.

DeKALB — The baseball team failed to pick up a win in their four-game road series against the Ball State University Cardinals in Muncie, Indiana.

The Huskies were downed by big innings by the Cardinals batters, who had an inning of scoring at least three runs in each game. Head Coach Mike Kunigonis said limiting runs will be a key for the team moving forward after it cost them a chance for wins this weekend.

“We need to do a better job of limiting the damage in an inning,” Kunigonis said Sunday in an NIU Athletics press release. “It hurt us this weekend and we will get back to work this week and be ready to play against Akron.”
Friday Game 1: Cardinals 3, Huskies 1
The Huskies and Cardinals opening game was a pitching duel between NIU junior pitcher Kyle Seebach and Ball State senior pitcher Jacob Baker.

Seebach would pitch six scoreless innings, allowing only two hits and striking out six batters before being replaced by sophomore pitcher Erik Hedmark.

Baker only gave up one run in a complete game pitched, striking out eight and only giving up four hits. The one Huskies run came in the fourth when sophomore outfielder Nick Drobushevich homered to left center.

The Cardinals only managed two hits until the eighth inning, when Hedmark gave up five hits and three runs. Senior outfielder Ross Messina hit a game-tying RBI single and sophomore infielder Ryan Peltier hit the go-ahead RBI double two batters later. Junior first-baseman Trenton Quartermaine capped the inning with an RBI single.
Friday Game 2: Cardinals 6, Huskies 2 (seven innings)
NIU had to contend with another great outing from the Cardinals starter in the second half of the doubleheader. Junior pitcher Chayce McDermott struckout 12 batters in six innings and only gave up one unearned run.

The Cardinals scored three runs in the third inning, topped off with a Peltier RBI single to make it 3-0.

In the fifth, the Cardinals added another three run frame to extend the lead to 6-0. Peltier had his third RBI of the day, joined by junior outfielder Nick Powell and Quartermaine in the scoring department.

NIU cut the lead in the top of the third with three runs of their own. Senior catcher Jake Dunham doubled to right for one run while senior infielder Dylan Lonteen singled to center for two RBIs.

After the Huskies gave up one more run in the fourth, sophomore pitcher Nick Bonk helped NIU stay afloat with two and a third innings of relief work where he only allowed two baserunners.

NIU bats got hot with the game on the line in the seventh. Dunham cut the score to 6-4 with an RBI infield single. With the bases loaded, redshirt junior outfielder Brady Huebbe singled to bring home one run and keep runners at each bag. Cardinals first-year pitcher Sam Klein came in to strikeout the last two batters, record the save and end the game 6-5 for the Cardinals.
Sunday: Cardinals 11, Huskies 1 (seven innings)
Four runs by the Cardinals started the day series finale, later adding seven in the fifth to go up 11-0. Four Cardinals batters recorded two RBIs on the day, including first-year shortstop Adam Tellier, Messina, Powell and Peltier.

Meanwhile, the NIU batters had nothing for the Cardinals first-year pitcher Trennor O’Donnell. O’Donnell pitched a scoreless five and a third innings and only gave up three hits on the day.

It wasn’t until the sixth that NIU finally got a run, with Dunham hitting a home run to right field to make the final 11-1.

The Huskies overall record falls to 7-27 with a conference record of 6-14, but they have a chance to turn their luck around with a homestretch heading into May.

NIU meets the last place University of Akron Zips in a four-game series this weekend. The first game starts at 2 p.m. Friday at Ralph McKinzie Field in DeKalb.