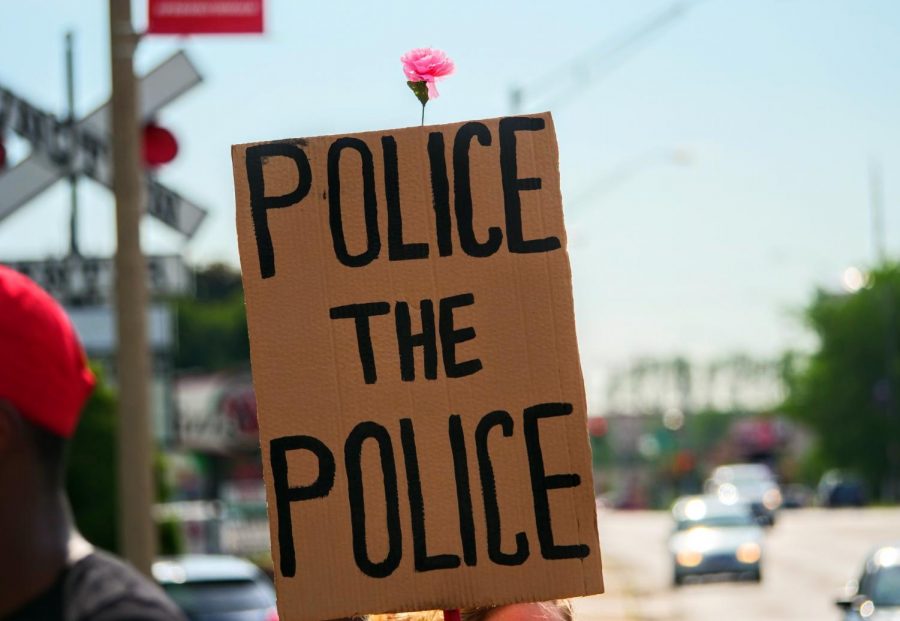 The meeting included a visual aid presentation from panelist Simón Weffer, associate professor and director of undergraduate studies for the Sociology department. He discussed several high-profile cases of “police violence,” a term that he says broadens the definition of “police brutality.”

He spoke in-depth about the disparities that minorities face with law enforcement. Weffer shared research that police kill African Americans at a disproportionate rate relative to white Americans and Latinos.

“In relation to traffic stops, Latinos are pulled over almost double, and African Americans almost triple to their population size, according to FBI statistics,” Weffer said.

Weffer also spoke about several high-profile cases that have deeply resonated with the public. A cell phone video taken by Army second Lt. Caron Nazario, who is an Afro-Latino, went viral in April.

The incident, which occurred in December, shows the army lieutenant from Virginia dressed in uniform being pepper-sprayed and forcibly removed from his vehicle, and handcuffed by Officer Joe Gutierrez when he questioned why he was pulled over. Nazario was never officially charged with a crime. The Virginia attorney general is currently launching a civil rights probe and investigation of the incident.

Eric Armstrong, Marine Corps veteran and panelist at the event, said it was tough to watch the video of Nazario. Armstrong remarked that it hurt, as an African American and a member of the Armed Forces, to see how a fellow service member was treated.

Armstrong also spoke of the history of Black servicemen and women coming home after proudly serving their country only to face systemic racism and discrimination when they returned.

Several panelists spoke about the nuances of race and policing. Santos-Rivas said members of law enforcement can be BIPOC themselves and how these issues are complex, intersectional and need further discussion.

Weffer said that it is “a very loud minority of police officers who are creating all of these problems.”

Solutions and initiatives for police violence were also discussed at the meeting. The general consensus was that systemic change and reform are needed.

Weffer and the panelists discussed consistent de-escalation training, increasing the use of tasers, mace and non-lethal methods of force.

“Increasing professionalism when dealing with the public is needed,” said Anne Edwards, director for the Center for Black Studies.

Alicia Smith, an NIU law student and panelist, spoke about Adam Toledo, a 13-year-old from the Little Village neighborhood in Chicago. A Chicago police officer killed Toledo on March 29.

Smith was surprised to learn that the Chicago Police Department, and many other police departments, currently do not have an official foot pursuit policy mandate. Smith expressed the importance of structured guidelines and protocol for departments that do not require lethal and deadly force.

During the Q&A portion of the discussion, Raymundo Enriquez, a first-year graduate student, spoke about the importance of law enforcement officials fostering positive relationships with the communities they serve.

“The NIU Police do a good job because they work closely with the students, and they know them,” Enriquez said. He added that police officers in larger cities often aren’t familiar with or know anyone in the neighborhoods they are serving and policing.

Officer Darren Mitchell, NIU deputy chief of police, joined the discussion and spoke about other factors that come into play when holding officers accountable, standard operating procedures and case law. Mitchell also spoke about the importance of accountability, transparency with community members and increased training and teaching for officers.

As the panel discussion ended, Santos-Rivas stressed the importance of these conversations and how there will be future discussions and panels. “I really appreciated this panel discussion,” Rivas said.

Rivas hopes that future panel discussions will continue to bring increased awareness, transparency and in-depth solutions to foster an open dialogue between the NIU and DeKalb community and the police.