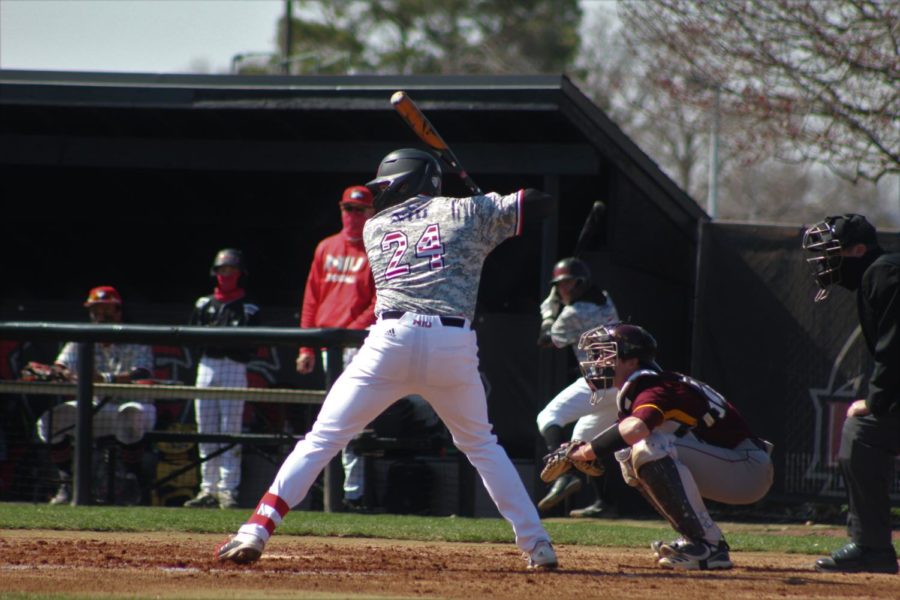 DeKALB — The NIU baseball team rebounded from two losses to start their road series against the Eastern Michigan University Eagles with two wins to split the series.

In the series finale Sunday, NIU overcame an early 4-0 deficit to comeback and win 8-5. Sophomore pitcher Erik Hedmark helped secure the win with his first save of the year with no runs allowed in three and a third innings of relief work.

The Huskies, who struggled early in the season, have won or split their last three series thanks to scrappy performances like Sunday’s rally. Head coach Mike Kunigonis said the “never say die” attitude paid off with wins.

“Today was a great win for the boys,” Kunigonis said in an NIU Athletics news release Sunday. “We kept battling and scratching runs across. We did a really nice job battling in each at bat and it paid off with a series split.”
Friday: Eagles 10, Huskies 4
EMU junior catcher Gabe Denton’s two-run homer in the first inning made up a portion of the Eagles huge opening run, leading NIU 5-0 after two innings.

NIU failed to score in the first five innings, leaving five runners on base. In the sixth while down 6-0, NIU redshirt junior outfielder Brady Huebbe homered to left center for three runs. An RBI single by freshman infielder Eric Erato gave NIU their fourth and final run of the contest.

EMU rounded out their dominance at the plate with four more runs, including home runs by senior infielder Christian Bault and junior infielder Taylor Hopkins. EMU graduate student pitcher Davis Feldman recorded the save with three innings of relief work, holding NIU to two hits.
Saturday Game 1: Eagles 3, Huskies 2 (seven innings)
EMU jumped out to a 1-0 lead with an RBI double by Denton in the first. Over the next three innings, Huskies junior pitcher Michael Lasiewicz didn’t allow a single hit by the Eagles.

In the top of the fifth, NIU tied the game with an RBI single by sophomore infielder Patty McKermitt. The tie didn’t survive the bottom half of the frame, as a Hopkins home run and another RBI double by Denton made it 3-1.

The Huskies fate would come down to the seventh inning, where they got an initial run off a fielder’s choice by first-year outfielder Brandon Johnson. Johnson advanced to second following a walk drawn by senior outfielder Brendan Joyce with one out.

Following a strikeout by Erato, senior outfielder Matt Barnes grounded out to second for the out to decide the game.
Saturday Game 2: Huskies 5, Eagles 3 (seven innings)
Looking to redeem himself from the earlier loss, Erato helped bring home the first run of the game in the third. On what was to be a sacrifice bunt to advance the runners, an error brought home McKermitt all the way from second.

Senior first baseman Jordan Larson scored two runs with a double in the fifth. The Huskies added two more runs in the sixth, one off a fielding error and the other off an RBI double by Joyce.

Senior pitcher Ryan Anderson dominated in a six and a third innings start. Anderson struck out seven batters for what was his third win of the season.

Anderson allowed the Eagles to breakthrough in the seventh, when Hopkins hit an RBI double to get on the board. Senior pitcher Nate Thomas allowed two more runs in relief, but registered the final two outs to help Anderson record the win.
Sunday: Huskies 8, Eagles 5
EMU hit the ground running Sunday with the first three batters getting on base. Four runs came across the plate off the bats of Bault, graduate student first baseman Mike Monahan and junior infielder Will Oberg.

NIU responded in the top of the second with three runs. Back-to-back doubles by Huebbe and Larson put the first run on the board, followed by sophomore outfielder Nick Drobushevich’s sacrifice fly. Barnes wrapped up the second inning scoring with an RBI single.

The Huskies tied the game in the fifth, with redshirt senior outfielder Kam Smith hitting a sacrifice fly to score Erato. To break the tie, Huebee hit an RBI double while being called out at second to end the fifth.

After both teams scored a run in the sixth, NIU extended the lead with runs off a groundout by Huebbe and a wild pitch thrown by Eagles junior pitcher Zach Fruit. The runs lead to the eventual 8-5 final.

NIU’s record now stands at 14-32 overall and 13-19 in Mid-American Conference play. The Huskies final home series of the season begins Friday against the University of Toledo Rockets. First pitch will be 2 p.m. Friday at Ralph McKinzie Field in DeKalb.