Huskies batting falters in final home series of the season 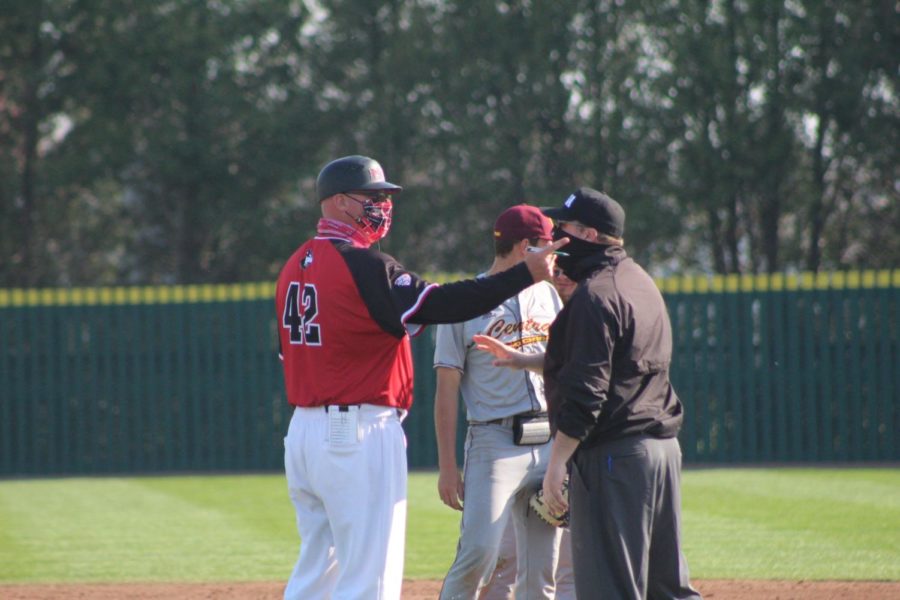 NIU head baseball coach Mike Kunigonis has a discussion with an umpire during an April 3 game against the Central Michigan Chippewas at Ralph McKinzie Field.

DeKALB — The baseball team struggled in their final home series of the 2021 season, losing three out of four games over the weekend to the University of Toledo Rockets.

NIU couldn’t keep up with the Mid-American Conference championship contending Rockets, being held to only two runs in the last two games of the series. The weekend dropped NIU to a tie with Eastern Michigan University to second-to-last in the MAC.

The final game of the weekend was the team’s Senior Day. This year’s squad honored 14 seniors and 2020 seniors Blake Walker and manager Alex Rest, whose seasons were cut short due to the pandemic.

After a rainstorm delayed the game’s start, Toledo jumped to the early advantage in the second. Toledo sophomore outfielder Darryn Davis and junior outfielder Danny O’Reilly both brought in RBI doubles to take the 2-0 lead, one they wouldn’t surrender.

The closest NIU got to challenging Toledo on the scoreboard was in the seventh inning, when an RBI triple by freshman infielder Eric Erato made it 4-3 in favor of the Rockets.

The Huskies entered the ninth with a chance to force extra innings or a walk-off if they could get out of the top of the frame runless. The Rockets exploded for three more runs off RBIs by junior infielder Trace Hatfield, junior outfielder Nicky Winterstein and Davis. The Huskies were shutout in the bottom half of the inning.

Toledo jumped out to an early 4-0 advantage in the first inning to start Saturday’s doubleheader. This time, NIU responded.

In the third inning, NIU got RBI hits from redshirt senior catcher Jake Dunham and senior outfielder Brendan Joyce. Redshirt junior outfielder Brady Huebbe added another run on a fielder’s choice. The Huskies tied the game 4-4 thanks to a fielding error by the Rockets.

After Toledo added a run in the top of the fourth, NIU took the lead for the first time that weekend thanks to a pair of runs. Redshirt senior outfielder Kam Smith singled to right field for the tying run while another Rockets fielder error put NIU ahead 6-5.

Dunham’s RBI double in the first inning put NIU in the lead early, but it proved to be their only run in the second game of the day.

Toledo senior pitcher Nate Haugh held the Huskies in check, allowing only four hits and striking out five over a complete game. NIU senior pitcher Ryan Anderson was tagged for the loss, giving up seven runs in four and a third innings.

NIU struggled to contain two particular Rockets players. O’Reilly already had two RBIs when he came to the plate in the fifth, when he doubled down the right field line for another pair to bring his RBI total to four.

Sophomore utility player Mason Sykes had two RBIs of his own, including a fifth inning home run to left field.

The hitting struggles of the Huskies carried over into Senior Day. NIU earned only two hits early before Rockets senior Wyatt Jefferson threw a hitless five and two-third innings of relief.

NIU’s only run came in the third off a wild pitch to bring home senior outfielder Matt Barnes.

The Rockets were again propelled by offense by Davis, who hit two-for-four with two RBIs on the day. Winterstein had an RBI single in the third, with the Rockets fourth run coming off a wild pitch in the ninth.

The loss marked the third time this season the Huskies were held to a run or less in back-to-back games.

NIU’s record drops to 15-35 overall with a conference record of 14-22. NIU now has one series remaining on the calendar, a road series against Bowling Green State University this weekend.

The Huskies and the Falcons first of four meetings is scheduled to start at 2 p.m. Friday in Bowling Green, Kentucky.