Huskies wrap up season with Sunday win against Bowling Green 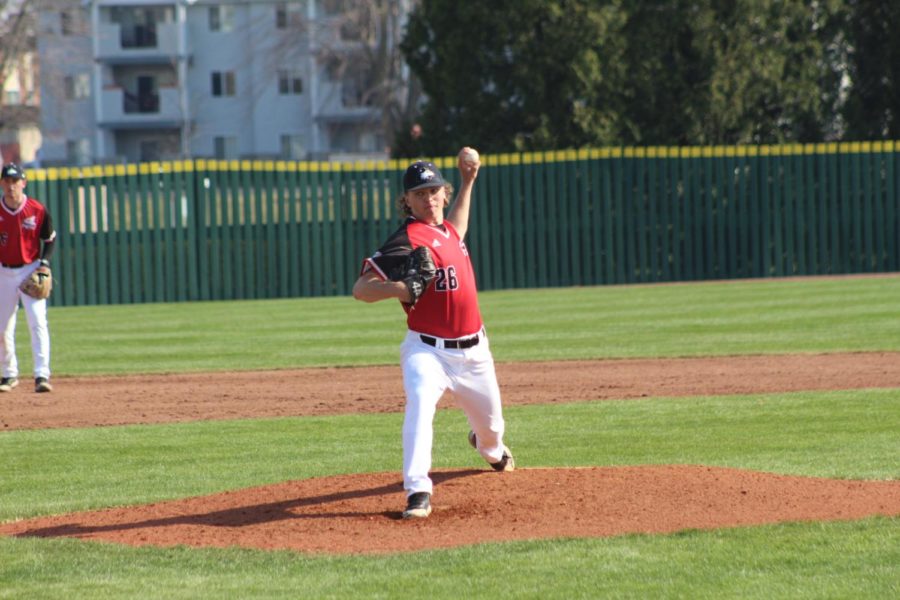 NIU freshman pitcher Conner Langreder throws a pitch at an April 3 game against the Central Michigan University Chippewas in DeKalb. Langreder threw 10 strikeouts in the season finale on Sunday.

DeKALB — The NIU baseball team saw their season come to an end Sunday, losing three of four games in a road series against the Bowling Green State University Falcons.

After losing a doubleheader on Saturday and the opening game Sunday, NIU finished its season on a high note with a 2-1 victory. Freshman pitcher Connor Langreder struck out 10 batters, a season-high for a pitcher this season, over eight innings.

Head coach Mike Kunigonis said it was nice to reward players with a win to end a difficult season.

“It’s been a tough year all around for this group,” Kunigonis said in an NIU Athletics press release Sunday. “We battled the complexities of COVID and the highs and lows that came with it. This group fought and battled the whole way, and we showed that in the last game. I want to thank all our seniors for what they gave to our program.”
Saturday Game 1: Falcons 10, Huskies 9 (seven innings)
The Huskies couldn’t have gotten much better to start than holding an 8-2 lead through four innings. Redshirt senior catcher Jake Dunham contributed five RBIs with a two-run single in the first and a bases-clearing triple in the fourth.

After a fine start, the game unraveled for NIU and senior pitcher Ryan Anderson in the bottom of the fifth. Anderson gave up four hits and two runs before allowing another runner to score off a wild pitch. Anderson would be pulled before completing the inning, but would get tagged with two more earned runs to make it 8-7 Falcons entering the sixth.

The Falcons’ comeback was completed in the sixth when sophomore infielder Ryan Johnston doubled to score the tying and go-ahead runs. The Huskies wouldn’t fade yet, with senior infielder Dylan Lonteen leading off the seventh with a home run to tie the game at 9-9.

Bowling Green walked-off in the bottom half of the inning on a bases-loaded sacrifice fly by freshman infielder Nathan Rose, leaving NIU staggered heading into the afternoon contest.
Saturday Game 2: Falcons 7, Huskies 0
NIU managed seven hits, but no runs in a dominant showing from the Bowling Green pitching staff. Falcons freshman Rigo Ramos managed his six-inning start well while junior Will MacLean recorded the save with four strikeouts.

The Huskies’ lone scoring opportunity  was sniffed out in the fourth when Dunham failed to beat out a tag at home plate.

Bowling Green’s breakout inning came in the fourth when the Falcons put up five runs. Johnston was the breakout player once again, following up an RBI single by stealing second and forcing an error to bring another run home.
Sunday Game 1: Falcons 5, Huskies 4 (seven innings)
Rain on Friday moved around the schedule for the weekend, making Sunday another doubleheader. The Falcons’ momentum carried them in the first inning, going up 3-1 on NIU.

The Huskies only managed one hit from the second to fifth inning, but Falcons errors broke the levee in another crucial sixth inning. Redshirt senior outfielder Kam Smith led-off with a single and scored on an error by the third baseman. Lonteen scored on a wild pitch and senior first baseman Jordan Larson scored the tying run on a passed ball.

In the bottom of the sixth, the Huskies committed an error while trying to turn a double play that would end the inning. The error scored a run to make it 5-4, the eventual final.
Sunday Game 2: Huskies 2, Falcons 1
Both teams managed to earn runs in the opening inning. Dunham gave NIU a run off a sacrifice fly while Falcons freshman catcher Kyle Gurney hit an RBI double.

The top of the second is when NIU earned the deciding run, with redshirt junior Brady Huebbe homering to left field to make it 2-1.

Pitching dominated the rest of the afternoon, NIU getting the edge behind 10 strikeouts from Langreder. Langreder retired the last nine batters he faced and registered NIU’s first double-digit strikeout game since March 2019.

Senior pitcher Tristan Michaels closed out the season with his first save of the season, capping a nice send off for the 2021 campaign.

NIU finishes the season with a 16-38 record overall, finishing tied for ninth in the Mid-American Conference standings with a 15-25 record. The Central Michigan University Chippewas claimed the conference championship and will play in the NCAA College Baseball World Series.