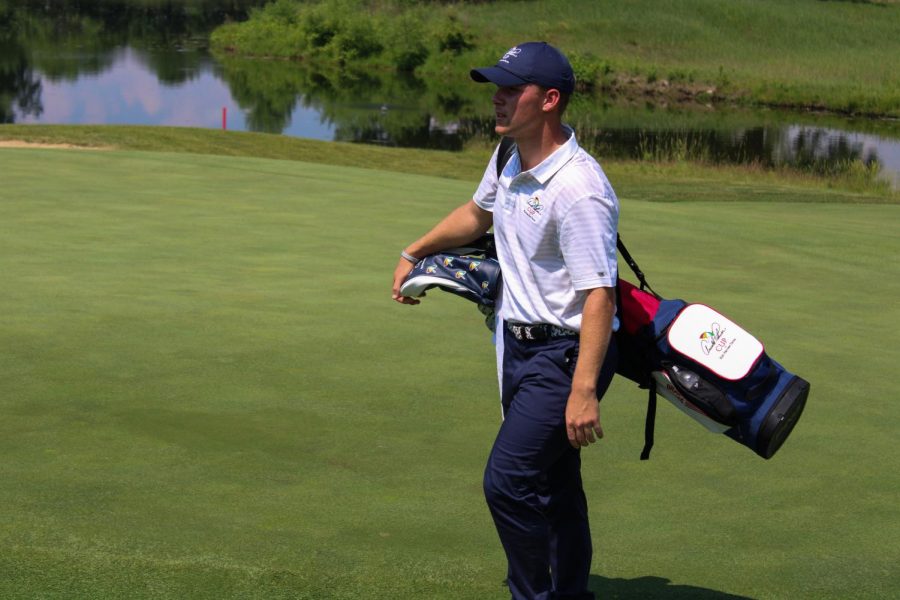 SUGAR GROVE— After two separate rain delays, the first session of the 2021 Arnold Palmer Cup came to a close at Rich Harvest Farms in Sugar Grove. At the conclusion of 12 mixed-fourball matches, Team USA and Team International are tied with six points apiece.

The International team busted out of the gates strong behind Oklahoma State University duo Eugenio Chacarra and Isabella Fierro. Chacarra and Fierra closed out Brooke Matthews and Dylan Menante in 15-holes, securing a 5&3 victory. Chacarra and Fierro racked up six birdies and an eagle over that 15-hole span.

“We wanted to get the first points for the team,” said Chacarra in a post-round interview. “We knew if we played our best golf, we were going to be tough to beat.”

The International team was not finished after drawing first blood. Hugo Townsend and Beatrice Wallin finished off the USA pairing of Sam Bennett and Erica Shepard on the 15th green, growing the International lead to two points with ten matches still being contested.

Townsend and Wallin quickly got the upper hand against Team USA, recording a two-up lead through three holes early. After surrendering the fourth hole, Townsend and Wallin rattled off a string of seven birdies through the heart of the course before having their streak snapped by a par on the 13th hole.

After bearing through three hours of upper 80-degree temperatures and high humidity, a sporadic wave of severe weather rolled over Rich Harvest Farms, causing officials to halt play and shuttle players and patrons indoors to wait out the cell.

After a two hour rain delay, according to Palmer Cup officials, players were shuttled back out onto the course to resume competition for the afternoon.

With the International team leading in six of the remaining ten matches out on the course, Team USA was in need of some solid momentum.

Hanna Harrison and Trevor Norby held a 2-up lead through 14-holes, but after a birdie by International team duo of Penny Brown and Allan Hill on 15 and a Team USA bogey on 17, the USA lead was down to one in the match with one hole to play. The Internationals and Americans swapped birdies on the par-5 18th hole, securing the first points on the day for Team USA.

Team USA struggled across the remaining matches to gain any sort of measurable advantage. Of the six matches Team USA won Friday, four were secured with a lead of two holes or less. While Team International had half of its victories recorded before stepping foot on the 16th hole.

While the session looked to be slipping away from the American team, rules officials blew the horn for the second time in the session after another wave of severe weather rolled over the golf course, causing heavy gusts and power outages in course facilities.

After an hour and ten minute delay, officials gave the final go ahead for players to resume action, which is when the tides turned in favor of Team USA.

In the final four matches of the session, Team USA secured three and a half points, tying the Internationals up at six points each.

USA partners Ricky Castillo and Lauren Hartlage were able to flip a 2-down deficit at the turn, into a tied match thanks to a gutsy birdie on the 18th hole which squared the whole and ensured half a point went to the stars and stripes.

The final match to tee off between Piercesson Coody and Gina Kim of Team USA against Julian Perico and Pauline Roussin-Bouchard went a full 18-holes. After the International duo made its birdie attempt, Team USA stood alone on the green with the chance to secure an outright point if Coody could make an uphill putt for eagle.

Coody made the read and hammered home the eagle putt, securing the match for team USA and creating an overall halve for the session.

Saturday will see both teams play 36 holes with 24 points up for grabs between the two sessions. The first session is alternate shot foursomes, which is scheduled to tee off starting at 7:30 a.m.

The International team came into the cup as the defending champions after recording a 40.5-19.5 victory in November 2020 at Bay Hill Golf Club in Orlando, Florida. Team International has won the last two Palmer Cups hosted on American soil.