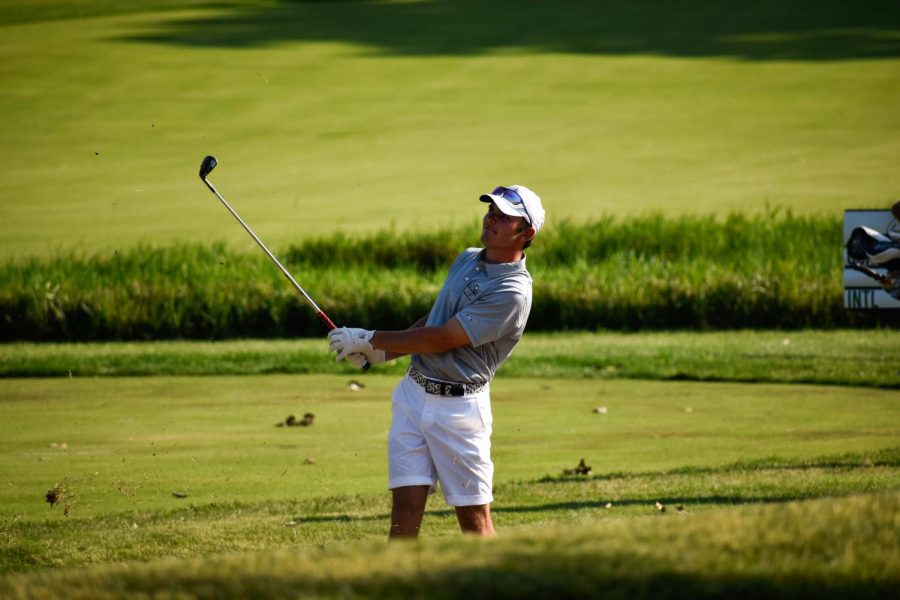 Team USAs Trent Phillips goes for a green during the afternoon mix-foursomes session June 12, at the 2021 Arnold Palmer Cup at Rich Harvest Farms in Sugar Grove.

SUGAR GROVE— Team USA holds a four-point advantage over the International team heading into Sunday singles matches at Rich Harvest Farms, after 36 strong holes of foursome, alternate-shot, matches.
Saturday Morning Foursomes
The morning session started off strong with an International team victory. Euginio Chacarra and Yuxin Lin paired up in the morning foursome session to take down the USA duo of Jacob Bridgeman and Ryan Hall 3&2.

Team USA came back quickly on the backs of Wake Forest University teammates Rachel Kuehn and Emilia Migliaccio. Kuehn and Migliaccio closed out Penny Brown and Lauren Walsh in 17-holes, putting the first points on the board for the stars and stripes early Saturday. Kuehn and Magliaccio never trailed in their match, having so much as a four-hole advantage at points in the match.

Team USA saw another woman’s pairing secure points early with strong play throughout the round. Gina Kim and Erica Shepherd locked in a 3&2 victory over Virunpat Olankitkunchai and Emily Price on the 16th hole.

Securing six outright victories and one tie was enough for the Internationals to win the morning session. Though not an outright victory, the Americans did secure five and a half points in the morning wave, keeping them within striking distance of the International lead. At the lunch break, the World led by one, 12.5 to 11.5.
Saturday Afternoon Mix-Foursomes
The afternoon’s mix foursome session tee’d off just after 1 p.m. at Rich Harvest Farms. A high chance of inclement weather loomed over the area for most of the afternoon. Tournament officials chose to start the second session on-time, hoping to have a handful of holes completed prior to suspending play.

Saturday afternoon saw a two hour stoppage of play early-on during the second session. Once the skies broke, officials sent players to the range for a restart before shuttling them back out onto the course to resume play and the final hours of daylight.

Like Friday’s sessions, the weather delay re-energized the Americans who came firing, closing out two matches both with four holes left to play.

Erica Sheppard and Sam Bennett closed out Emily Price and Joe Pagdin for the first points of the afternoon with a 5&4 victory on the 14th hole. At the exact same time, Team USA secured another 5&4 victory on hole five thanks to Kate Smith and Brad Reeves defeating Olankitkunchai and Puwit Anupansuebsai.

Late in the afternoon, the SEC duo Latanna Stone, LSU, and Trent Phillips, University of Georgia, took down Penny Brown and Allan Hill 5&4 to add another lopsided win to the USA tallies.

This was the first session during the 2021 Palmer Cup that saw Team USA close out multiple matches at 5&4 without the Internationals doing the same. The Americans took eight of the 12 points up for grabs in the afternoon session giving Team USA a 20-16 lead heading into the 24 singles matches Sunday.

America will need to capture 11 of the 24 matches to recapture the Cup for the first-time since 2018, when they secured the cup in France.