Huskies head to Michigan to face the Chippewas 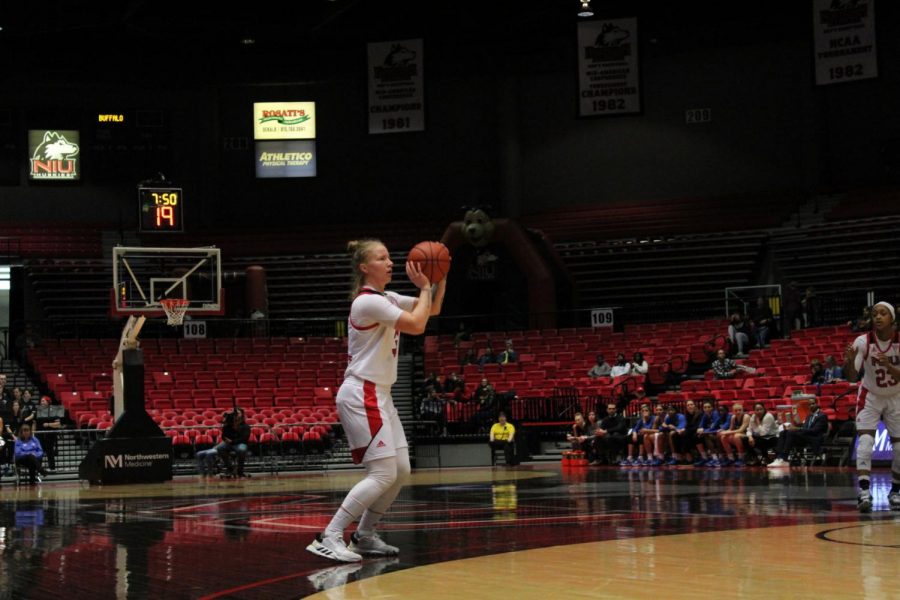 Junior Gabby Nikitinaite attempts a 3-point shot Feb. 1 during NIU's 64-63 win over the University at Buffalo Bulls at the Convocation Center.

DeKALB — The women’s basketball team will travel 6:00 p.m. Wednesday to McGuirk Arena in Mount Pleasant, Michigan as it will face the Central Michigan University Chippewas.

The Huskies will arrive in Michigan hoping to carry the momentum gained from their late comeback win against the University at Buffalo Bulls.

Junior guard Gabby Nikitinaite played no small part in NIU’s victory, converting from beyond the arc five times throughout the game.

Nikitinaite’s most notable 3-point effort came with 50 seconds left to play, as she pulled the Huskies within one point of the Bulls.

With 4.9 seconds left, redshirt senior forward Ally May capitalized on the opportunity and clinched the victory for NIU with a jump shot from the baseline, capping off the comeback by the Huskies.

CMU is awaiting the women’s basketball team, coming into Wednesday’s game in first-place at 16-4.

The Chippewas are on a roll, victorious in their last nine games, going undefeated since the start of the new year.

However, CMU has recently struggled to maintain its dominant ways with its past two wins, one against the Buffalo Bulls and the other against the Ohio Bobcats, both wins having to be earned in overtime.

CMU’s most recent overtime victory is due in large part to junior forward Kyla Bussell, who put on a 33-point performance, a new career-high, on a 75% shooting clip against the Bobcats.

Another star performer in CMU’s overtime performance against Buffalo was first-year guard Molly Davis, as she shot 50% from beyond the arc in a 23-point performance.

Both of these players may factor into NIU’s game plan, as the team looks to limit the fast-paced scoring of Central Michigan.

Following Wednesday’s game, NIU will be back on the road Saturday, this time traveling for its noon game to Bowling Green Ohio to compete against the Bowling Green State University Falcons at the Stroh Center.