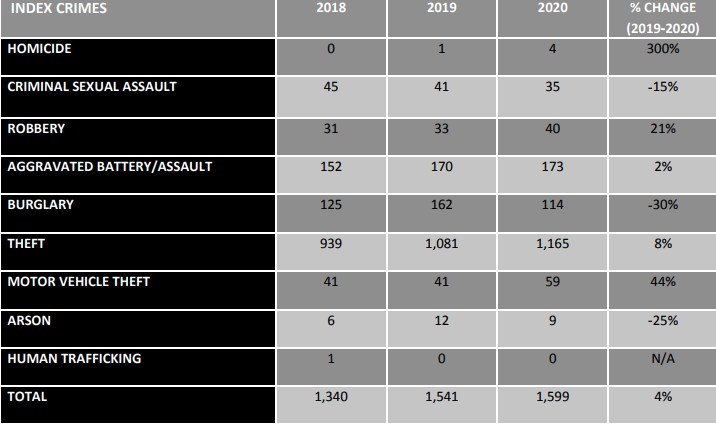 Data presented at Monday’s meeting showed a 4% increase in these crimes from 2019.

DeKALB – Violent and property crimes in DeKalb rose 4% in 2020, according to an annual DeKalb Police report presented at Monday’s City Council meeting.

Other crimes and offenses considered less serious, including battery, disorderly conduct or major motor vehicle offenses, fell by 15% in 2020, according to the annual report.

DeKalb Police Chief David Byrd and City Manager Bill Nicklas also discussed the steps the city has taken in terms of police reform, including the reorganization of the police department, mandated body cameras and more.

“The year 2020 was an eventful year – pandemic, social justice movement, which demanded and gave our attention to and affected our police department in a number of ways, including changes and procedures and accountability and transparency,” Nicklas said.

“When I walk into a roll call room, I want to see a picture of humanity, that’s what I want to see,” Byrd said. “So everyone is represented, and I think we’re on our way to doing that. As far as the annual report, the guys work extremely hard in a pandemic, which is unprecedented to be working in that type of atmosphere.”