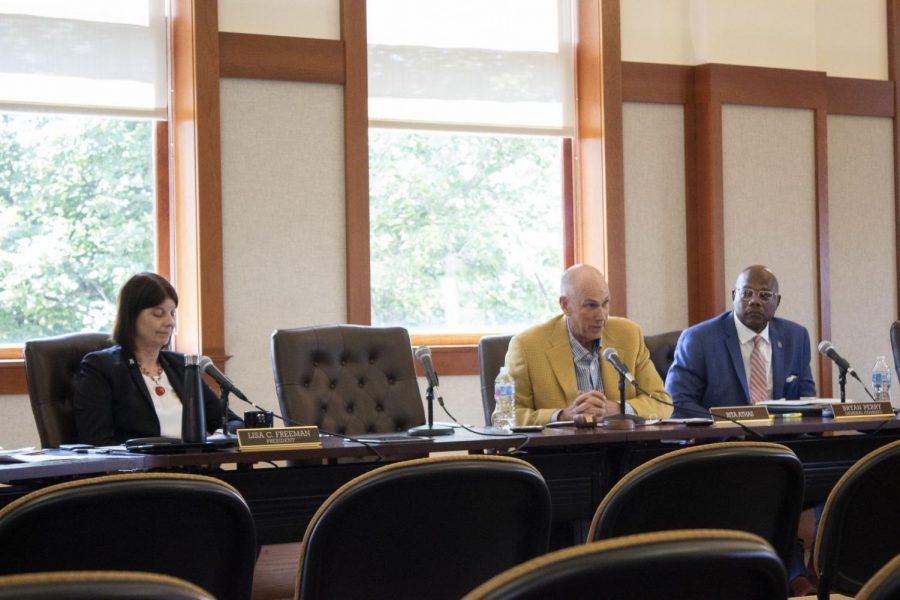 At the Aug. 15, 2019 meeting, Board of Trustees Chairperson Dennis Barsema addresses former NTC students after their public comments.

DeKALB – The Board of Trustees approved the university’s fiscal year 2022 internal budget with an anticipated $10 million deficit and an increase in revenue of $12 million from fiscal year 2021.

The FY22 internal budget was unanimously approved at Thursday’s Board of Trustees meeting. Sarah Chinniah, vice president and chief financial officer, said that while the FY22 budget isn’t at pre-pandemic levels yet, the university is expecting an increase in expenses.

“NIU has looked at different scenarios for FY22 resulting in the best case, worst case and most likely models,” Chinniah said. “The FY22 budget presented today is the most likely scenario.”

In FY22, the university is expecting to see a $964,000 increase in tuition and student fees and a $15 million increase in rental and room income compared to FY21 as more students move back on campus this fall, according to the budget.

The increase in personnel services can, in part, be attributed to the 3% salary increase for non-negotiated faculty and staff, which was approved at Thursday’s meeting. The salary increment is set to take effect July 1 to those employed by the university on or before Dec. 31, 2020.

The Board of Trustees also voted to approve Lynda B. Ransdell as the dean for the College of Health and Human Sciences. Beverly Henry held the position as interim dean of the college since December.

Previously, Ransdell was the dean of the College of Health and Human Sciences at Northern Arizona University, according to the June 17 Board of Trustees agenda.

She also served as a department chair, university ombudsperson and associate dean. Ransdell is also a professor who researches faculty development, mentoring, enhancing sports performance of female athletes, and physical and public health.

Ransdell graduated from Eastern Kentucky University with her bachelor’s degree, earned a master’s degree from Smith College in Massachusetts and a doctorate degree from Arizona State University.

“When I interviewed, I could really tell that the NIU faculty and staff love northern Illinois and are passionate about working with students,” Ransdell said. “The students with whom I interacted, I could tell that they really want to make a difference in the world and that’s the type of institution I’m excited to be affiliated with.”