Most classrooms to be equipped with live-streaming by fall semester 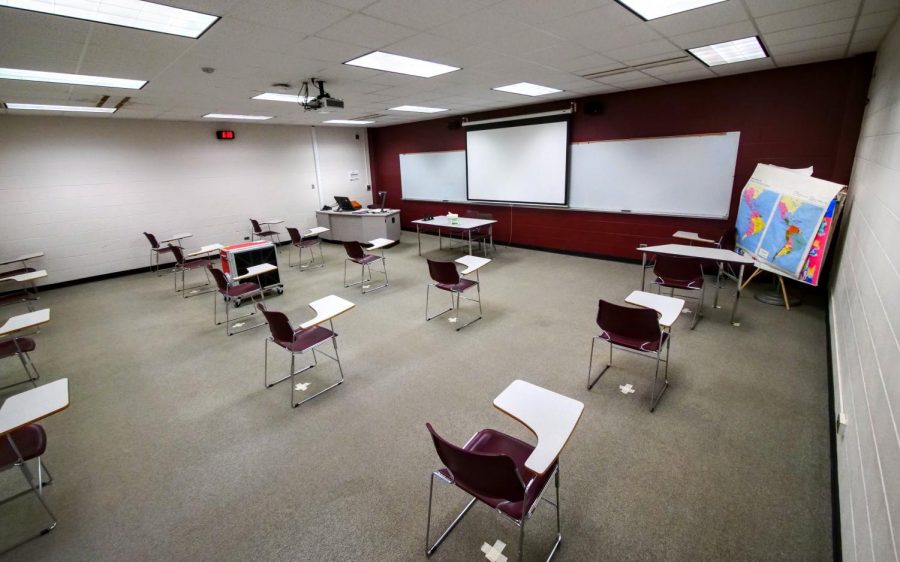 Funds have been used to purchase new hardware and software for classrooms across campus, a majority of those at NIU in DeKalb.

DeKALB – The Board of Trustees unanimously approved an appropriation of $700,000 in funding to purchase further “classroom technology enhancements” at a June 17 meeting. The upgrades will facilitate live-streaming capabilities in most classrooms at NIU for the coming 2021 academic year.

The proposal stemmed from a special Board of Trustees meeting in May where the purpose of the funding was outlined. Primarily billed as a response to the university’s remote learning policy implemented in the wake of the outbreak of COVID-19, funding was also described as a way to allow for the creation of a more flexible teaching and learning environment.

The funds will be used to purchase new hardware and software for approximately 80 classrooms across campus, a majority of those at NIU in DeKalb.

About 50 classrooms will see new installations which will facilitate the video recording of lectures, in addition to live-streaming capabilities and two-way collaboration between in-person and remote lecture participants, Matthew Parks, associate vice president of IT and chief information officer said. Software already in use like Blackboard Collaborate and Zoom will remain the primary media for remote collaboration.

In a Wednesday email, Beth Ingram, provost and executive vice president, said the technology would allow faculty to respond effectively to any contingencies but did not anticipate that fall semester in-person classes would change to hybrid or remote learning environments.

Upgrades and installations will include new computer software to better handle live-streaming and recording needs, and physical hardware such as cameras, microphones, monitors, projectors, and computers, depending on each room’s configuration. Over two dozen smaller classrooms have also already been equipped with the Owl Pro “smart conferencing” camera system, a high-definition video streaming device that automatically adjusts its camera to show whoever is speaking.

“It’s really just the functionality of what our colleges are looking for,” Parks said. “We’ve got a suite of options available to us.”

Additions to the other classrooms receiving equipment will largely include further upgrades to current hardware and software installations that were implemented last summer to facilitate the live-streaming of classroom lectures.

Parks said they are closing the gap on near-ubiquitous live-streaming capabilities in all classrooms this summer.

“Looking at this coming academic year, there were more rooms on the docket than we had in place for the last academic year, and so about 50 additional rooms that were not in our plan last year needed brand new upgrades,” Parks said. “Virtually all of our classrooms this fall will have the ability to capture lectures on the fly and then stream them live as well.”

An extensive assessment at the end of the spring semester determined which classrooms needed which equipment upgrades to ensure an efficient application of funds and resources, Ingram said.

“There were several considerations that went in,” Ingram said. “We wanted to have a realistic view of how much equipment we could actually get because of the supply chain issues and what we could get installed.”

Ingram said that a further evaluation will take place after the fall semester to assess how classroom technology needs are being met with the new software and hardware in place.

“The plan right now is to get all of this installed, assess where we are in the fall, and then think about what else we might need to do, but not to over invest before we have a good sense of where we need equipment and what kind of equipment is working for the students and for the faculty,” Ingram said.

Parks said supply chain issues and product shortages were a prevalent problem last summer due to the pandemic, leaving his IT Division scrambling to get things ready for the Fall 2020 semester.

“We’ve pulled the trigger as an institution quicker this time around, so we’re better prepared,” Parks said. “We either have receipts, or we’ve got ship dates for (most of our hardware) so we feel pretty good. The computers themselves have the greatest lead time. (They) likely don’t come in until mid-July, but that’s ample runway for us.”

Parks said it’s still going to be an aggressive summer for the IT Division, but they are ahead of schedule from where they were last summer and are not anticipating any significant delays.

“This is sort of the initial down payment in what will be a multiyear planning effort on the evolution of classrooms at NIU,” Parks said. “That’s work I very much look forward to getting into.”

Ingram said the efficiency of the unprecedented upgrades was only possible due to the cohesiveness of the several different departments.

“To me, this is a great example of a lot of different units on campus coming together: my office, the Center for Teaching, the Center for Innovative Technology and Learning and the Division of Information Technology,” Ingram said. “It really took all of us working together to think about ‘What do the students need?’, ‘What do the faculty need?’, ‘How are we going to be in the best position to have a great educational experience for our students in the fall?’. It’s really been a great collaboration on campus.”