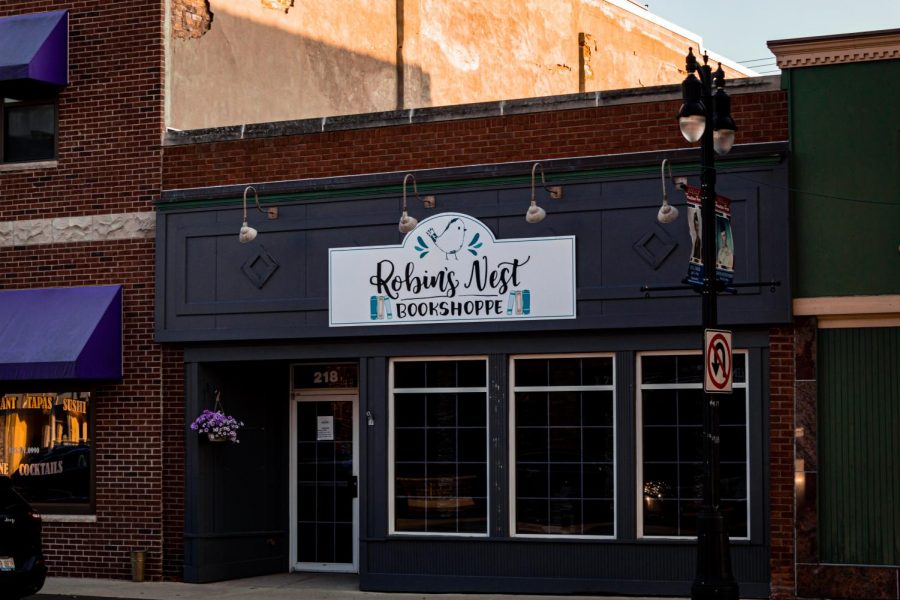 DeKALB – In addition to the losses of several local businesses since the outbreak of COVID-19, DeKalb has also seen new businesses emerge while others have changed locations completely.

One frequent haunt of NIU students that is no longer where most will remember it is the coffee shop Common Grounds. Formerly located at 131 E. Lincoln Highway, the locally owned coffee hangout has since moved to 2180 Oakland Drive in Sycamore after a relocation effort fraught with complications.

“Our lease ended last April, so before that time we started looking at other properties that would allow us to grow,” owner Jeff Foster said. “Before the 2020 holidays we had started putting a plan together.”

The owners of Common Grounds had always made efforts for community outreach and charity, such as using the proceeds from sales of used books to assist victims of human trafficking, among other endeavors. Foster said they wanted to move to a location that could continue to facilitate similar efforts.

“We opened the coffee shop as a way to build relationships, connect with students, and local leaders and all that stuff,” Foster said. “Then, we started to think about relocating, and here was this building in downtown DeKalb that had been vacant for 13 years. So, we said to ourselves that if we could get in there, we could do something amazing.”

Common Grounds began the transition to its new location at 123 E. Lincoln Highway in April. However, Foster said the relocation soon fell through due to the failure of the building’s owner to make expected repairs, but not before Foster and the other owners had already sunk money into their own repairs and construction.

“​​We pulled out of that lease and that building situation, and we moved from DeKalb to Sycamore,” Foster said. “At that point, I actually stopped working with my team and went at it alone. We, since that time, reopened as a family-owned business.”

Rechristened as Common Grounds Coffee, Tea and Smoothies, the store had its soft opening on July 23 at the new Sycamore location. Foster said it’s a new location but the same mission and hopes to be able to reconnect with the returning student body of NIU as well as the creatives that the store has attracted since its founding.

“​​It’s like a bookstore slash art gallery,” Foster said. “That’s the goal, and it just happens to have an awesome coffee bar. The idea is more of a collaborative experience. There will be an opportunity for mentorship and community development, and the coffee shop will just be more of a way to bring people together.”

As Common Grounds moves to a new location, other ventures are just getting off the ground. One completely new business to emerge since COVID-19 is Robin’s Nest Bookshoppe, located at 218 E. Lincoln Highway in downtown DeKalb.

Owned and operated by Tim and Bobbi Hays, the couple said their experience running the nearby Barb City Bagels played a role in their decision to open another local business.

“We knew that when we were looking at opening a bookstore, we wanted to be downtown because we love downtown DeKalb and we wanted it to be a part of what we really see as a growing revitalization,” Hays said.

Owning a bookstore had always been a lifelong dream of Hays’ since childhood, and, rather than an obstacle, the COVID-19 outbreak and the ensuing restriction in Illinois actually allowed her and her husband the time to make it a reality, Hays said.

“When we were all locked into our homes and not able to go anywhere, there’s only so many house projects you can do before you start to drive each other bonkers,” Hays said. “So, I started saying to my husband, ‘Let’s start putting some things down. Let’s figure out, when this is over, how we make it happen.’ We already had some ideas, but we started really putting it on paper, and so that’s how we spent a lot of our COVID time.”

Hays said once a location became available, things progressed quickly with Robin’s Nest’s grand opening occurring in April. The store focuses on catering to the community, namely due to the highly specialized inventory.

“I wanted customers to be able to come in and tell us what they were interested in reading: authors, topics, genres, you name it,” Hays said. “So, if you come into the bookstore, you will see we have a pad of paper right at the front counter and we encourage people to come in and tell us who they want to read, and that’s where we do a lot of our ordering from. We want to put on the shelves the titles and the authors that the community is interested in reading.”

Hays also guaranteed that no used book for sale in the store will cost more than $5, in an effort to ensure that anyone can find a good book no matter what their budget is. Hays said she and her husband’s background as educators and their shared adoration of books played an important role in their decision to keep the used book section focused more on accessibility rather than profit.

“We’ve only been here since April, so we still have a ways to go,” Hays said. “We’re still trying to get some bookshelves in, and we’ve still got some different things that still have to happen, but we’re excited. The community has been overwhelmingly gracious and welcoming to us.”