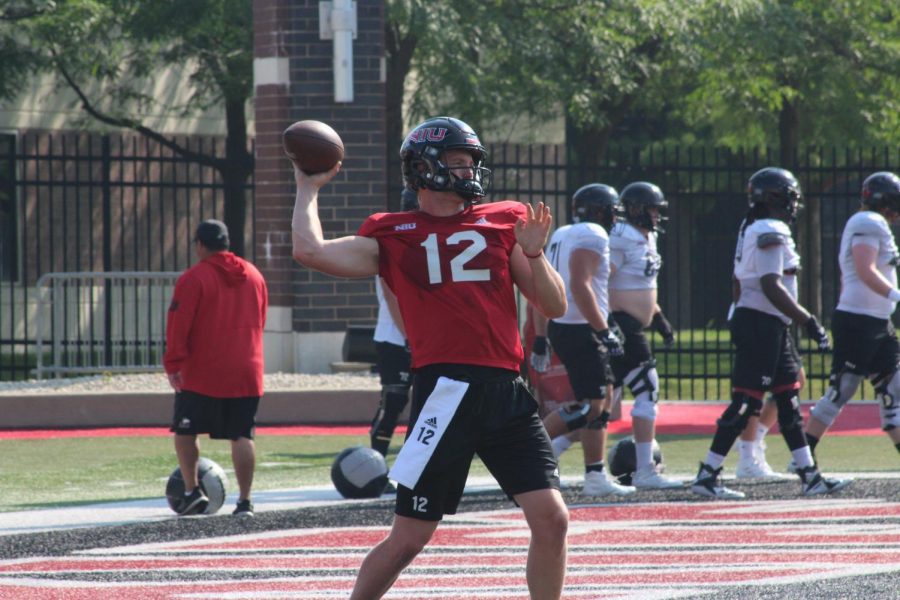 DeKALB — After a winless season in 2020, the football team hopes the experience gained will shape the Huskies into a stronger unit.

After going 0-6 in a COVID-19 shortened season, the offseason focus for head coach Thomas Hammock was to build confidence and trust in the team he’s put together.

“One thing I believe in is that trust is earned through consistency,” Hammock said at NIU Media Day on Aug. 9. “What I’ve seen over the last few months, I think I’ve got a really good feel for this football team. I trust this football team, their level of commitment and discipline.”

The Huskies roster in 2020 saw freshmen make up a staggering 71% of their roster, the second-highest percentage in the FBS.

This year, 87 players are under the classification of freshman, with 40 either being redshirt freshmen or getting an extra year of eligibility due to COVID-19. Hammock said those returning players are showing drastic improvement.

“A year ago, we had 40 freshmen come into the program,” Hammock said at NIU Media Day. “We were able to get guys to get ready to play, to prepare each week and compete. We knew there would be a process with that, but we knew if we stayed committed to that process that it would pay dividends. You look at those guys now and say ‘Man, what a difference a year makes.’”

As a former Huskies running back, Hammock said the focus is naturally towards running the football. Also high on Hammock’s agenda is improved defense after allowing an average of 38.7 points per game last season.

“Our team is going to be defined by a couple of things, number one being running the football,” Hammock said. “It starts there. We play in the Midwest in a lot of different elements. A run game and a good defense will always travel. Those are the two things we’re working on, being able to run the football when we want to, have to or need to.”

The story of the offseason for NIU was the acquisition of another former power-five conference quarterback. Junior quarterback Rocky Lombardi transferred to NIU in the spring from Michigan State University, throwing eight touchdowns and nine interceptions last season.

Lombardi said a variety of factors drew him to NIU, namely the drive the team had during 2020.

NIU has several strong running backs that could be used in rotation. Freshman back Harrison Waylee led the team in rushing last year with 456 yards, while junior back led the team with four rushing touchdowns. Freshman back Jay Decker will debut this year after missing last season with an injury.

NIU also added senior running back Clint Ratkovich from Western Illinois University. Ratkovich was highlighted for his versatility upon joining the program, and now Hammock said he’d be scouting Ratkovich to play for his former team, the Baltimore Ravens.

“I think Clint is a pro,” Hammock said. “If I were in Baltimore, I’d be evaluating him to get drafted. He’s got to stay healthy, and he’s got to produce. We’re going to bring in guys who are going to make a difference.”

On the defensive side of the ball, the focus has been on physicality and on individuals to do their role to help the team. The Huskies, including freshman safety Devin Lafayette, call this their “1/11”.

“The main focus has been being more physical,” Lafayette said. “We want to be more physical with our tackling, understand our assignments and just do our 1/11.”

Lafayette is among eight defensive backs who return this season with experience. Sophomore cornerback Jordan Gandy led the team with 41 tackles and eight pass deflections.

The Huskies’ season starts at 6:30 p.m. CST Sept. 4 at Bobby Dodd Stadium in Atlanta where NIU faces the Georgia Tech Yellow Jackets. The game will be broadcast live on the ACC Network.