Fill in the blank: My first week of school was… 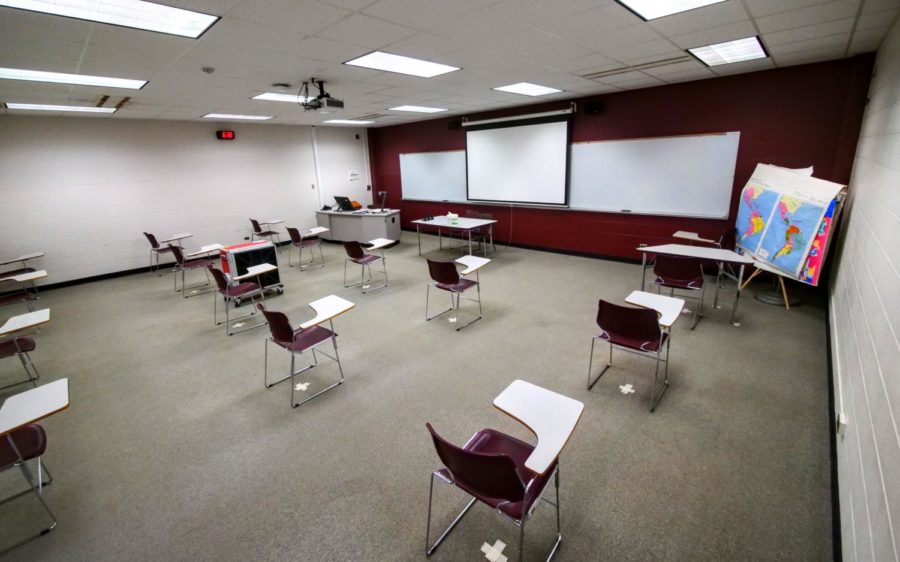 Desks in DuSable Hall are socially distanced and marked by tape on the ground.

… confusing.
Yari Tapia | Opinion Editor
Even though I’m a senior at NIU, I sometimes felt like a freshman, with it being my first time on campus. I didn’t know the best route for my classes. I barely figured out the Huskie bus system. And the parking garage was my worst nightmare.

I aimlessly walked up and down the parking levels, just like I aimlessly walked through campus under the boiling sun. I was more concerned about how to get to my classes rather than the classes themselves, which were overall OK.

I made it a mission to culture myself with food from the Huskie Den, but that did not happen, probably because I didn’t know where that was. I guess I’ll have to save Qdoba for next week. I also made it a mission to box at the Recreation Center, which I did know where that was, but I got lazy. I had extracurricular activities that I’ve been a part of since last fall, so that was pretty routine.

The Northern Star kept me busy, but I was still open to joining more clubs. I don’t think I made any friends this week, but that’s OK. I spoke to new people, and I’m not at all nervous about the semester. I’m sure with time, I’ll know my way around here pretty well.

… exuberant.
Janyce-Monique Johnson | Columnist
I transferred to NIU right when the pandemic started, so this week marked my first time taking in-person classes at NIU. The shift from sitting in my living room as I attempted to stay engaged in an online course to sitting in class absorbed in a face-to-face lecture was refreshing.

Instead of walking around a nearly empty campus and looking at the outside of lecture halls, I ventured into those very buildings. I felt the energy all around me as students walked by – something we had all been deprived of for what feels like a millennium has become reality once more. I instantly felt more motivated and organized, and that comfortable feeling of normalcy flooded my body.

I also moved to a new part of town and became roommates with some amazing women. The change of environment has motivated me to reignite my passion for writing and finally face my fear of publishing. This is one reason I am nervous but mostly excited to be a part of the Northern Star team this semester. Overall, I am excited for what the semester will bring with new knowledge, new opportunities, new memories, all exuberance.