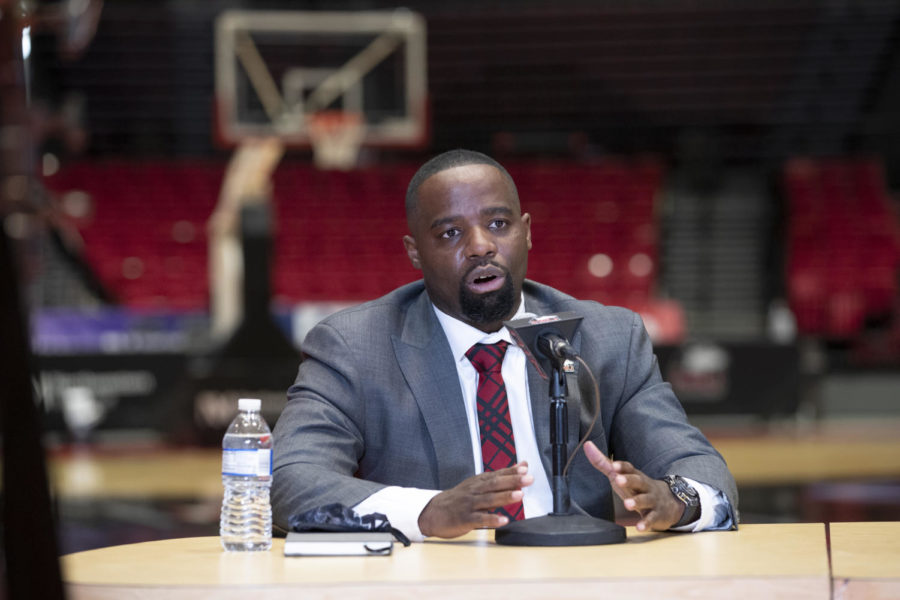 NIU Head Coach Rashon Burno speaks with the media following the announcement as the next head coach of Huskies men's basketball March 13 at the NIU Convocation Center.

After a 3-16 season and the hiring of Rashon Burno as head coach in May, the Huskies will have to navigate a challenging 32 game slate.

After an Oct. 30 exhibition against the University of St. Francis at home, the Huskies open their regular season with six road games. The first road game comes against another group of Huskies, the University of Washington, on Nov. 9 in Seattle.

NIU will visit the Indiana University Hoosiers on Nov. 12 in Bloomington, the first meeting of the two schools since NIU knocked off the fifth-ranked Hoosiers at Chick Evans Fieldhouse on Jan. 4, 1971.

Straying not too far from home, the Huskies will face the University of Missouri Tigers on Nov. 18 in Columbia, Missouri before participating in the inaugural Jacksonville Classic eight-team tournament from Nov. 21-23. NIU opens the tournament against Boston University on Nov. 21 at the UNF Arena.

NIU closes out the road stint on Nov. 27 in Milwaukee against Marquette University before playing their first home game on Dec. 1 against the Eastern Illinois University Panthers.

Mid-American Conference play begins Dec. 29 for NIU when they host their rivals in the Ball State University Cardinals. The Huskies will play four Saturday home games over the conference portion of the calendar, starting Jan. 15 with a game against the Eastern Michigan University Eagles.

Along with EMU, NIU will get to host two other teams that didn’t visit DeKalb last season due to COVID-19 cancellations. The Central Michigan University Chippewas will visit the Convocation Center on Jan. 29 and the University of Toledo Rockets will come to town Feb. 12.

The regular season ends for NIU on March 4 against the defending MAC Champions, the Ohio University Bobcats.