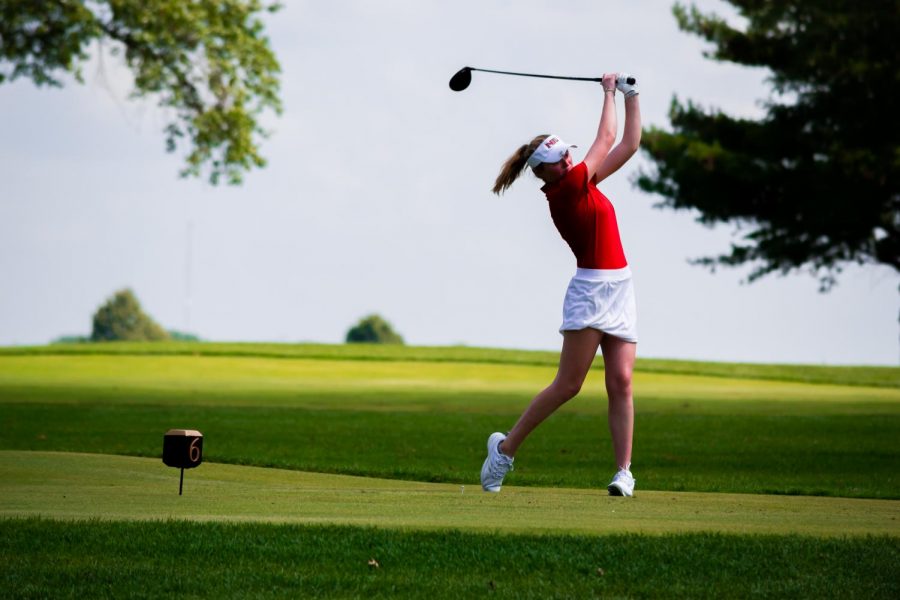 True freshman Caroline Kent hits driver Aug. 28, on the 6th hole at Rich Harvest Farms during a qualifying round for the 2021 fall season. Kent is one of three freshman on the women's team who looks to make an early impact for Coach Kester's squad.

DeKALB— A solo second finish at the 2021 MAC Championship in April concluded the women’s golf program’s shortened season, but it was only the beginning of what was an impactful offseason for the program.

During the offseason, the women’s golf team signed women’s British Amateur runner-up Johanna Ludviksdottir, Caroline Kent from Frisco, TX and Renata Petersen from Lakewood. The new faces, along with returning all but one player to the team, brings a sense of excitement to the program.

“It’s really encouraging,” said Kim Kester, head women’s golf coach. “We’ve got a lot of experience and talent, and the goal this year is to win.”

The Huskies 2021 season finished with two wins, two runner-up finishes and only one finish outside the top five. With such a strong win-loss record, the disappointment stung when the NCAA did not award the Huskies into an NCAA Regional tournament.

“Yeah, it stung a bit,” Kester said. “A lot of that came from our strength of schedule, and that falls on me as a coach to get us into tougher competition and to showcase how competitive we can be.”
A new season schedule
This season, the Huskies are mixing up their travel schedule by adding new tournaments that feature stiffer competition.

“The schedule this year takes us to new places where we will see tougher teams,” Kester said. “We will face some power-five teams and expose the girls to really tough competition.”

The team’s new events see them traveling to the Pat Bradley Invitational, hosted by Florida Atlantic University, the Gold Rush hosted by Long Beach State University and a trip to Paradise Island in the Bahamas to end the fall competition schedule.

With many high-profile tournaments, competition among players to make the travel roster is shaping up to push the team as a whole.

Ly’s experience is something that will help push Kester’s team as the season moves on and will help elevate their competitive play.

“Ideally, we want to lean on all the girls,” Kester said. “Jasmine’s going to play a huge role obviously, but ideally we want to see her play push everyone.”
One ultimate goal for the season
Though the season is more of a marathon than a sprint, the goal is clear for the team: win the MAC championship and punch a bid to regionals.

“We want to win the MAC and get a regional spot,” junior Ahra Ko said. “Last season was great, but we want to win it this year.”

“It’ll be fun to go back,” Kester said. “Even better to come back with a trophy.”

The Huskies open their season Sunday and the Redbird Invitational in Normal.