Huskies saddle up for home opener 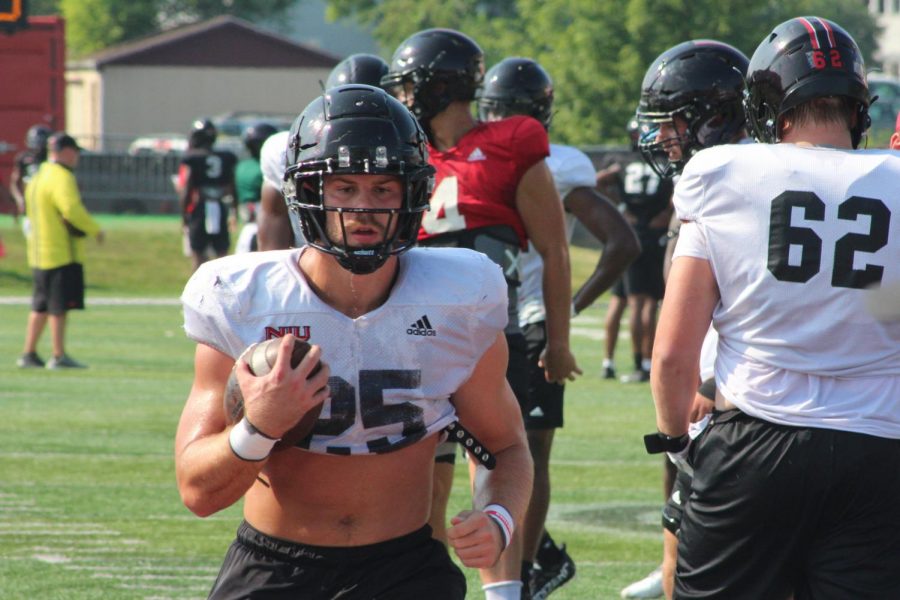 DeKALB — Fresh off an upset victory last week against Georgia Tech, the NIU football team has begun preparing for their home opener against the University of Wyoming Cowboys at 12:30 p.m. Saturday.

The Huskies celebrated a boneyard win 22-21 in Atlanta on Saturday, finishing the Yellow Jackets with a game-winning drive and two-point conversion catch by redshirt senior wide receiver Tyrice Richie in the final minute.

Head coach Thomas Hammock said the win, the first for many on a team of 87 freshmen, helped the Huskies understand “The Hard Way” mentality that has been their creed for many years.

“I explained to the team, ‘You guys are developing an edge, and you don’t even realize,’” Hammock said. “I told them yesterday in the team meeting that the edge is ‘The Hard Way.’ When you embrace whatever is coming your way, embrace whatever opponent is in front of you, and you embrace whatever happens because you’re physically and mentally prepared to continue to move forward. I think it clicked for them.”

Redshirt freshman offensive lineman JJ Lippe got the win in his first collegiate start, but Lippe said the time for celebration is over with Wyoming coming to town.

“We celebrate at the time, and then we have to move on,” Lippe said. “We had practice today and really got after it. It’s probably the most physical practice we’ll have this week.”

The Wyoming Cowboys are coming off their own narrow victory, avoiding an upset to Montana State University with a late touchdown to win 19-16. Hammock expects another nail-biter this weekend.

“It’s going to be a battle,” Hammock said. “I expect it to come down to the wire. Something we talked about during the offseason was being able to win those one possession football games, and to win those games, you have to embrace it, not avoid it.”

The Cowboys enter the game with a solid running attack led by senior running back Xazvian Valladay. Valladay rushed for 78 yards in Wyoming’s win last Saturday.

Hammock and the players appearing at NIU’s weekly press conference all echoed the sentiment that Wyoming was a physical team. Redshirt senior linebacker Lance Deveaux Jr., who led the Huskies with 12 tackles last week, said the game will come down to which team plays tougher.

“They’re a tough team,” Deveaux said. “We’re going to have to nut up, be physical and punch them back in the mouth. We’re going to see who out toughs who.”

The game marks the first full capacity game at Huskie Stadium since 2019, after spectators were limited last year. Hammock hopes a return of fans means a huge advantage at home.

“We’d love for our fans to show up and create a home field advantage for our players,” Hammock said. “That creates a big difference. NIU students and alumni, the whole community, I think this game will be big.”

With access to seating at Huskie Stadium being considered indoors, masks will be required at all times until spectators reach their seats. NIU Athletics is also introducing a new clear and small bag policy, a new re-entry policy, and encouraging mobile ticket usage. More details can be found on the NIU Athletics website.

Kickoff is scheduled for 12:30 p.m. Saturday at Huskie Stadium, with the game being available on ESPN+.