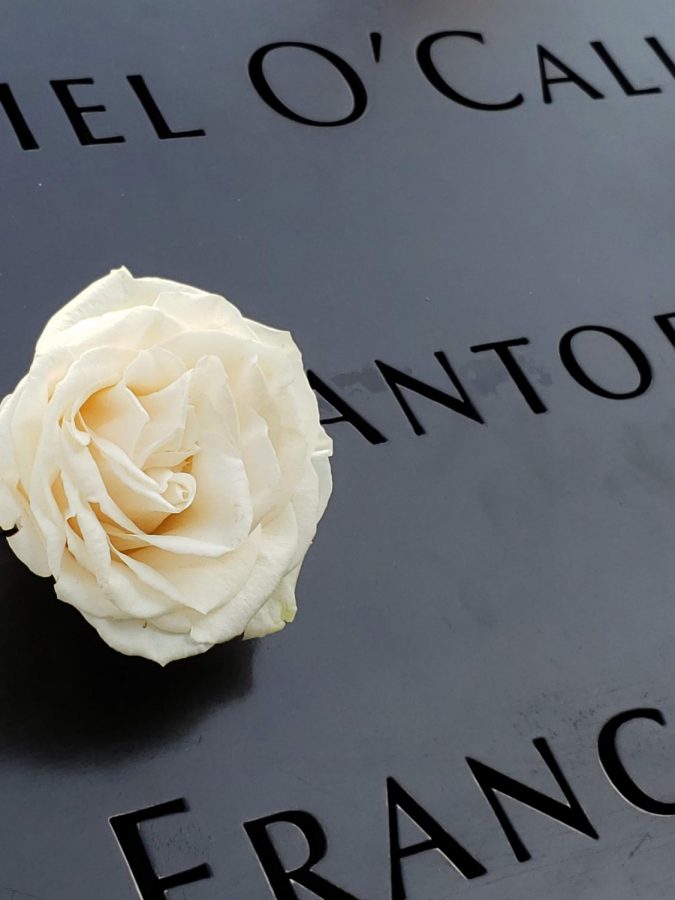 A white rose is placed in the lettering of a person who was killed at the World Trade Center to symbolize their birthday.

By Northern Star Editorial Board and Wes Sanderson

On Sept. 12, 2001, the Northern Star Editorial Board published its daily editorial with a drawing of the American flag with the words “The Second Date of Infamy” right below the symbol of American freedom.

For a college press, the words spoke truth to the events that happened the day prior when four U.S. commercial airliners were hijacked and used as weapons of mass destruction to kill 2,977 people and injure more than an additional 6,000.

The tragedy that is Sept. 11, 2001, will never be forgotten in American history, and the impact of that day still lives with us in what is now part of our daily lives. The story of 9/11 didn’t end when the towers fell. The death toll didn’t stop as the rescue and clean-up ended.

In the days following the fall of the north and south towers, thousands of first responders from the FDNY, NYPD, Port Authority police and agencies across the United States came to aid New York in rescue efforts. They did what any human would do in a time of tragedy, but now they are the next wave of victims.

Those heroes of that tragic day slowly fade away in memory and in body due to the inhalation of more than 2,500 contaminants such as glass, lead, mercury and asbestos, according to the Never Forget Project, a non-profit organization helping the lives of FDNY firefighters who worked Ground Zero.

On the 15th anniversary, over 1,100 members of the FDNY had been diagnosed with a form of cancer linked to 9/11 chemical exposure, according to the WTC Health Program. These heroes still suffer but go unnoticed for most of the year.

America uses the phrase “always remember, never forget” when talking about this tragic day. We as a country built memorials to honor the men, women and children lost in New York, D.C. and Shanksville.

What should also not be forgotten is the people who came to the aid of those in need that day. Those who went toward the flames and into the rubble to give thousands of families peace of mind and a body to bury.

The country came together to build reflecting pools and a museum at the site where the Twin Towers once stood. The silence is so eerie you could hear a car horn three blocks away. Ground Zero is the permanent reminder of that day.

Those memorials are not just a symbol for the fallen, but for those who rushed towards the smoke and showed the best of humanity when the worst was so strong.

The Northern Star Editorial Board will always remember and will never forget the people lost on that tragic day, but we will also always remember the men and women of the FDNY, NYPD, Port Authority police and other agencies who rushed toward the wreckage and up the burning buildings to save everyone in harm’s way.

Twenty years later, we need to remember those who are still with us. To celebrate the courage and sacrifice they gave to give the families of the fallen the closure and peace of mind they all deserved. The Northern Star Editorial board thanks those first responders and will never forget the heroes they were on one of the biggest days in American history.