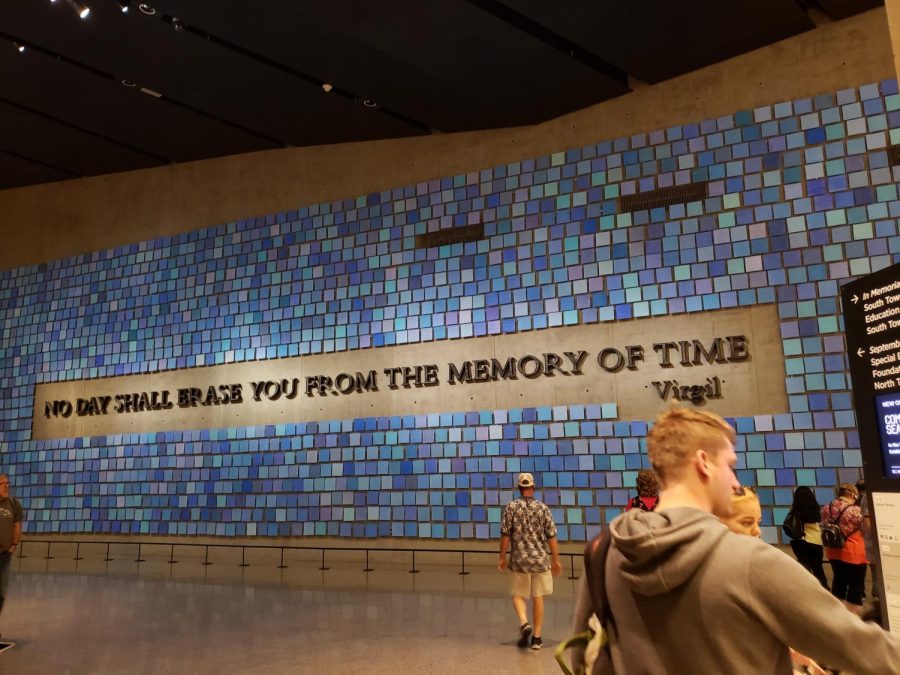 Spencer Finch's "Trying to remember the color of the sky on that September morning," is displayed prominently when you enter the 9/11 Memorial & Museum at Ground Zero. The art represents the 2983 lives lost at the World Trade Center on both 9/11 and and Feb. 26, 1963 attacks.

On a warm Tuesday morning, the Northern Star office was silent. After sending the print product to the press, they thought their work was done.

Little did the team of college reporters know, they were about to cover one of the most impactful events in American history.
Chaos strikes New York
At 8:46 a.m. in New York, American Airlines flight 11 crashed in the north tower of the World Trade Center. A billowing cloud of smoke became the focal point for the nation.

“I remember getting a call from my girlfriend who wasn’t making much sense,” said Josh Albrecht, editor-in-chief of the Northern Star during 9/11. “She said she was watching the ‘Today Show’ and that a plane hit a building and that I needed to get over to her apartment.”

As the country watched in fear, news agencies attempted to get answers, including the Northern Star.

“I sat there for about 15 minutes, taking in that scene on the TV,” Albrecht said. “After that, I left my girlfriend’s apartment and walked to the Star because I knew we needed to cover this.”
Initial calls
The news broke early in the morning, especially for editors who had just put a paper out a few hours prior.

“I remember getting out of the office late Tuesday morning,” said Melissa Westphal, then-managing editor at the Star. “So, the first I had heard about it was when our Adviser Jim Killam called and said, ‘I think you should get in here.’”

As Killam waited for students, the newsroom began to fill with faculty.

“The first people into the office were not students,” Killam said. “Faculty were the first to start filing in because we were the only office with a TV.”

As the faculty began to huddle, staffers began to file in, waiting to get assignments and tackle the day.

“When I got to the office, everyone was there,” Albrecht said. “This was probably the most packed I remember the newsroom, but there were no ‘good mornings,’ it was a very serious tone.”

As the necessary players gathered inside the Star’s suite at Campus Life, the action plan was set, reporters were given assignments, and the day was underway.
Action plans
The Northern Star knew they must cover the attacks due to the national value.

“We talked through every angle we could possibly take,” Westphal said. “We weren’t worried about us being in danger, but being close to Chicago, we knew that we should cover this.”

The Northern Star did not just cover the national angle. How would NIU respond to this tragedy? After all, it was a Tuesday, so what would campus be like?

“We made sure to cover every angle,” Albrecht said. “We sent people to Chicago, O’Hare and across campus. We didn’t know how the University was handling classes. We needed to find out.”

NIU elected not to cancel classes the day of the attack, but some felt that covering the attacks was going to be more powerful than anything they’d learn in a lecture hall.

“That day was the first day of missing a week and a half of class,” said Jeremy Norman, then-digital editor of the Northern Star. “I knew that I was going to be living at the Star for the foreseen future and instructors just said ‘do what you need to do.’”

Norman said that he spent the morning recoding the website to its most basic form due to massive traffic online, causing severe delays and crashing websites across the country.

“I started with two to three hours of recoding the website,” Norman said. “At least we could keep the information flowing online this way.”

The commitment to getting answers was unrelenting, but the theme of uniting was behind everything they did that day and in the weeks following the attacks.
Aftermath
After the towers fell, Americans wanted answers. The news cycle continued to run coverage of the attacks, and the country struggled with the question: when do we go back to normal?

“Following the attacks, there was this distinct period of darkness,” Norman said. “After 9/11, the question became, when can we laugh again?”

Though Sept. 11, 2001, is one of the darkest days in U.S. history, the editors of the Northern Star said covering the events were “life-changing,” “the most defining thing I’ve reported on,” and “a tremendous level of pride for the coverage.”