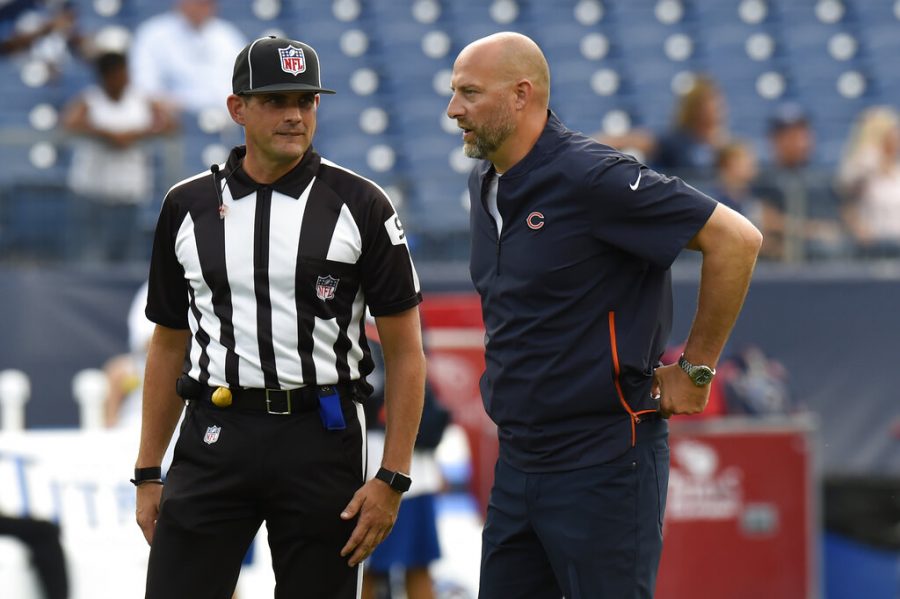 The Chicago Bears’ offseason decision making so far has not been ideal, with a lot of head-scratching moves that seem to have become the norm for the Bears under their current management.

The first of many decisions has to start with retaining the “Brain Trust” of the Bears, general manager Ryan Pace and head coach Matt Nagy, after losing in an ugly playoff matchup to the New Orleans Saints.

The two then made the decision to move on from Quarterback Mitchell Trubisky following the season. The release of Trubisky, in a way, shows the admission of failure by Pace and Nagy.

Pace identified Trubisky as a franchise-level quarterback early on in the 2017 draft, so much so that he traded up for him. You do not make a move like that without having the ultimate belief in him— he even chose Trubisky over players like Deshaun Watson and Patrick Mahomes.

Pace then hired Nagy a year later after he had a successful run as the Kansas City Chiefs Offensive Coordinator to take Trubisky to that next level, which he ultimately failed to do.

Even with two playoff appearances since Nagy taking over, the offense has still never looked smooth. Even with multiple quarterbacks being interchanged, the offense has never been better than 20th in total offense, which was Nagy’s first year as head coach.

The league was able to catch up to Nagy’s playcalling and schemes which is a knock on the so-called offensive “genius” since he has been unable to adjust back.

The next plan of motion for the team was to find a replacement for Trubisky, and there were options out there. High level quarterbacks were on the market like a disgruntled Watson in Houston, or an annual MVP candidate in Russel Wilson who was even interested in the Bears.

“If a trade were considered, the only teams he would go to are the Cowboys, Saints, Raiders and Bears” said Mark Rogers, Wilson’s agent, via a tweet by Adam Schefter.

Although there was mutual interest, it didn’t seem like the Bears really made a big push for Wilson instead of settling on signing Andy Dalton to a one-year, $10 million contract. The Bears paid Dalton nearly triple the total salary he received as the backup quarterback for the Dallas Cowboys in the 2020 season when Dalton put up 14 touchdowns to eight interceptions with a 5-5 record.

Not only was Dalton an underwhelming signing for the team but a costly one as well. The Bears were already up against the cap because of recent free agency decisions like the Robert Quinn signing paying him $14.7 million on average per year for a two sack season.

The Dalton signing forced the Bears to free up cap space on the defensive side when they cut multiple starters from the prior season, including fan favorite cornerback Kyle Fuller.

The loss of Fuller and many other decisions only added to the frustrations of not only Bears fans but the players too.

“Players are ‘pissed’ to where there’s a chance he (Nagy) could lose the locker room before the first team meeting of 2021,” Chris Emma of 670 The Score reported.

In trying to work the cap, Pace has slowly started to chip away at the strong culture built by the players over the past couple of seasons.

The boiling point for many fans this offseason came with the Allen Robinson contract dispute. The front offices’ failure to extend the teams number one wide receiver caused a panic among the fanbase as many believed the team would end up trading away its star receiver.

Instead, the Bears franchise tagged the 29-year-old wide out to a one-year, $17.9 million deal which will most likely bring the end to Robinson’s career in Chicago after the season.

All this drama came even before the 2021 NFL Draft, which at the time seemed like a push in the right direction for the Bears. They drafted a lot of young talent, including trading up for Ohio State Buckeyes Quarterback Justin Fields.

However, some of the picks seem off to a rocky start with the Bears’ second round selection offensive tackle Teven Jenkins already being put on Injured Reserve without even taking a preseason snap. The Bears’ sixth round selections, cornerback Thomas Graham Jr. and wide receiver Dazz Newsome, were both cut from the 53-man roster after showing promise in training camp and preseason.

Expectations aren’t high for the Bears’ 2021 season as the offensive struggles seem to be carrying over from last season, even with Dalton under center.

It’s also not the best look when Trubisky, who was replaced for Dalton, comes into his old stomping grounds of Soldier Field and scores 34 points on your starting defense.

Management is on a hot seat with the fanbase, and if struggles continue, another rebuild seems on the horizon for the team. The Bears open up their season in Los Angeles to take on the Rams at 8 p.m. Sept. 12 on NBC’s Sunday Night Football.