NIU erased a 26-point deficit, came up a defensive stop short in 50-43 loss to Wyoming 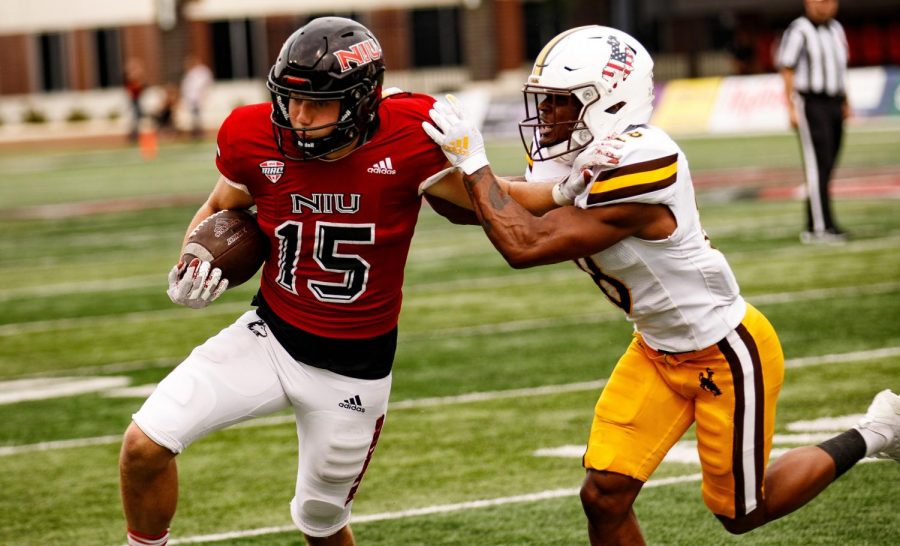 Redshirt junior wide reciever Cole Tucker fends off an attempted tackle by University of Wyoming junior safety Rome Weber on Sept. 11 in DeKalb. Tucker caught six passes for 103 yards and a touchdown in the Huskies 30-29 victory over Ball State.

DeKALB — The Huskies had a potential program-record comeback swiped away by a late touchdown by the University of Wyoming Cowboys, losing 50-43 in their home opener Saturday.

Down by 26 points with 6:03 left in the third quarter, the Huskies rattled off 27 unanswered points to take a 43-42 lead. Wyoming would end the run with a late touchdown run by junior quarterback Sean Chambers to retake the lead and secure the win.

Head coach Thomas Hammock expressed disappointment in the loss that pushed NIU to a 1-1 record, but not in his team’s performance.

“I love the resiliency of our guys,” Hammock said. “They competed for four quarters and didn’t let the score affect them one way or another. They just got ready for the next play. I couldn’t be more proud of them and their level of focus and discipline.”

“I feel like the team is maturing really fast,” Ratkovich said. “We’ve got a lot of young guys, but since I got here in January, the amount of maturity and growth since then has been insane. It shows today. Guys didn’t give up, didn’t flinch and went out there and did our job.”

“We have to play cleaner as a football team,” Hammock said. “We turned the ball over three times and gave them 21 points, and that’s on me.”

A total of 11,334 fans were in attendance for the first full capacity game at Huskie Stadium since before the COVID-19 pandemic.

The Huskies only managed a 47-yard field goal by redshirt sophomore kicker John Richardson before the end of the first quarter, making the score 14-3.

After having a pass tipped for an interception in the first, Lombardi forced a pass into double coverage and was picked off by junior strong safety Rome Weber. The Cowboys scored two plays later on a seven-yard run by senior running back Xazavian Valladay.

Ratkovich put the Huskies in scoring range with a breakaway 52-yard run when lined up at quarterback. The transfer from Western Illinois finished the drive with a one-yard touchdown run.

The Cowboys took the momentum back before halftime with another touchdown pass by Chambers to Neyor, making it 28-10 at the break.

The two teams traded touchdowns to start the second half, with Ratkovich and Neyor getting rushing touchdowns for NIU and Wyoming, respectively. Senior linebacker Chad Muma intercepted Lombardi and returned it 23-yards for a touchdown. Wyoming led 42-16 with 6:03 left in the third quarter.

The Huskies rally began on the very next possession when Lombardi found redshirt freshman wide receiver Trayvon Rudolph for a 40-yard touchdown pass.

After Wyoming ran off the remainder of the third quarter, the Huskies stuffed the Cowboys on fourth and one to force a turnover on downs. Waylee escaped the defense for a 75-yard touchdown run.

Wyoming fumbled on a backwards pass to start their next possession. Freshman defensive end Ray Thomas recovered to set up a 14-yard touchdown run by Waylee. Within 13 seconds, NIU shrunk the Cowboys lead to one score.

The crowd was at a fever pitch on the next Cowboys possession, leading to a Wyoming false start and a sack by freshman defensive tackle Devonte O’Malley to force the punt.

The Cowboys’ offense finally snapped out of its dry spell in time for a final drive. After a 30-yard catch by Neyor was confirmed by replay, Chambers took a quarterback sweep to the left for a four-yard touchdown run. A two-point conversion made it 50-43.

NIU would commit a turnover on downs and never get the ball back. The win propelled the Cowboys to 2-0.

The Huskies look to regroup ahead of their toughest challenge of the season at 11 a.m. Saturday, a meeting in Ann Arbor, Michigan, against the University of Michigan. The game will be broadcast on the Big Ten Network.