Football has history of Big 10 upsets

Since playing their first Big Ten game 50 years ago, the Huskies have captured eight victories over the conference 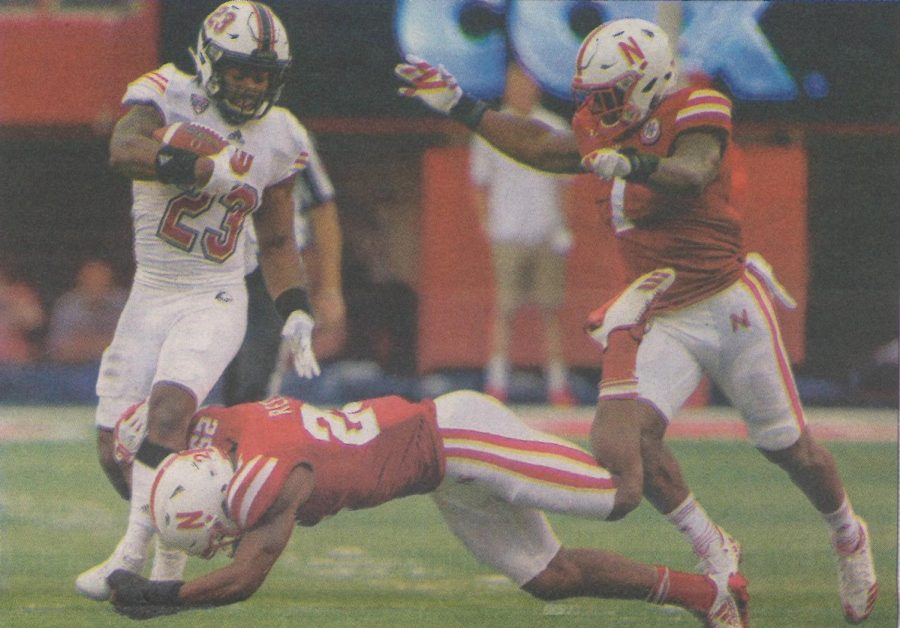 A photo of NIU running back Jordan Huff that ran in the Sept. 18, 2017 edition of the Northern Star after the Huskies beat the Nebraska Cornhuskers 21-17.

DeKALB — The NIU football’s “boneyard” is filled with wins over their regional rivals in the Big Ten Conference.

With the addition of a 22-21 victory over the Georgia Tech Yellow Jackets of the Atlantic Athletic Conference, the number of “boneyard” victories over power five conference programs is up to 17. The Huskies haven’t beaten any conference more than the Big Ten.

Last Saturday marked 50 years since the Huskies played their first game against a Big Ten opponent, a 31-7 loss to the University of Wisconsin. Since then, the Huskies have won seven games over the Midwest power conference with hopes to make it eight this Saturday against the University of Michigan Wolverines.

Here’s the history of NIU knocking off Big Ten powerhouses:

Many of the Huskies’ first Big Ten matchups were with the nearby University of Wisconsin Badgers. It was on attempt number eight that NIU, en route to a 7-4 season, finally defeated the Badgers.

Late in the game, NIU led a drive to set up a 31-yard field goal by kicker John Ivanic with 1:24 remaining. The Badgers set up their kicker, Rick Thompson, with a 55-yard attempt with four seconds left.

The kick sailed wide left, and NIU held on for the 19-17 win, their first victory in 14 attempts against Big Ten foes.
2009: NIU derail the Purdue Boilermakers 28-21
Jumping ahead over two decades, NIU found themselves in West Lafayette, Indiana, facing the Purdue University Boilermakers in the Huskies’ second season under head coach Jerry Kill.

The Huskies’ strategy against Purdue was to run air out of the ball and time off the clock. NIU combined for 280 yards rushing and 41 minutes and change of possession time.

NIU took the lead in the second quarter with a 57-yard breakaway touchdown run by running back Me’co Brown. The Huskies never surrendered the lead, finishing the Boilermakers 28-21.
2010: Huskies run roughshod over Minnesota Gophers 34-23
Coach Kill picked up his second Big Ten win in as many years in 2020 when his Huskies visited the University of Minnesota Gophers in Minneapolis.

Momentum was in hand for the Huskies throughout the game, including a punt blocked by future pro cornerback Jimmie Ward in the second quarter. The Huskies took the lead on the ensuing drive and never surrendered it to the Gophers.

The Huskies ran the ball with efficiency once again, with running back Chad Spann rushing for 223 yards and two touchdowns. Spann put an exclamation point on the performance with a 61-yard touchdown run in the fourth quarter to cap NIU’s scoring on a 34-23 victory.
Aug. 31, 2013: Huskies best Hawkeyes with last second field goal
Fresh off the quarterback Jordan Lynch having a Heisman-worthy season and the Huskies earning an appearance in the Orange Bowl, NIU opened 2013 under new head coach Rod Carey with a meeting with the Iowa University Hawkeyes.

Lynch picked up where he left off with 275 yards passing and three touchdowns, including two to wide receiver Tommylee Lewis and the game-tying score with 5:05 remaining.

Ward, three years after being the disruptor in NIU’s last Big Ten win, intercepted a pass by Iowa in the final two minutes to set up a 36-yard Matt Sims field goal to give NIU the 30-27 victory.
Sept. 28, 2013: NIU stars help trounces Boilermakers 55-24
Just four weeks removed from beating Iowa, NIU trounced Purdue in a return to Ross-Ade Stadium with a 55-24 victory.

The Huskies stars did it all in the blowout win. Lynch threw for three touchdowns and ran for another. Lewis opened the second-half with a 99-yard kick return touchdown while Ward scored an interception return touchdown.

The victory made 2013 only the second year in program history the Huskies picked up two boneyard victories in a season.
2014: Huskies invade Evanston, declaw Northwestern Wildcats
Thousands of NIU students, alumni and fans made the trek to Evanston, Illinois, for the Huskies 2014 meeting with the Northwestern University Wildcats.

Hare found wide receiver Da’Ron Brown in the endzone twice, including a 59-yard bomb by Hare. Hare scored one last time in the fourth quarter on a quarterback keeper to push the Huskies to 2-0 in their eventual Mid-American Conference winning season.
2017: NIU silences Nebraska Cornhuskers 21-17
Cornerback Shawun Lurry hushed the sellout Nebraska crowd with an 87-yard interception return touchdown on the opening drive of the game. Before the end of the first, linebacker Juwan Johnson would have his own pick-six to put NIU up 14-0.

The Cornhuskers would rally in the second half to score 17 unanswered points to take the lead, but the decider would come with 8:52 remaining on a two-yard touchdown run by running back Jordan Huff.

The game proved to be the breakout performance of defensive end Sutton Smith, who’d go on to have the school record for sacks in a season and earn All-American honors. Smith had two sacks and four tackles for a loss.

The Huskies will try and secure Big Ten win number eight at 11 a.m. CST Saturday in Ann Arbor, Michigan, against Michigan. The game will be broadcast live on the Big Ten Network.