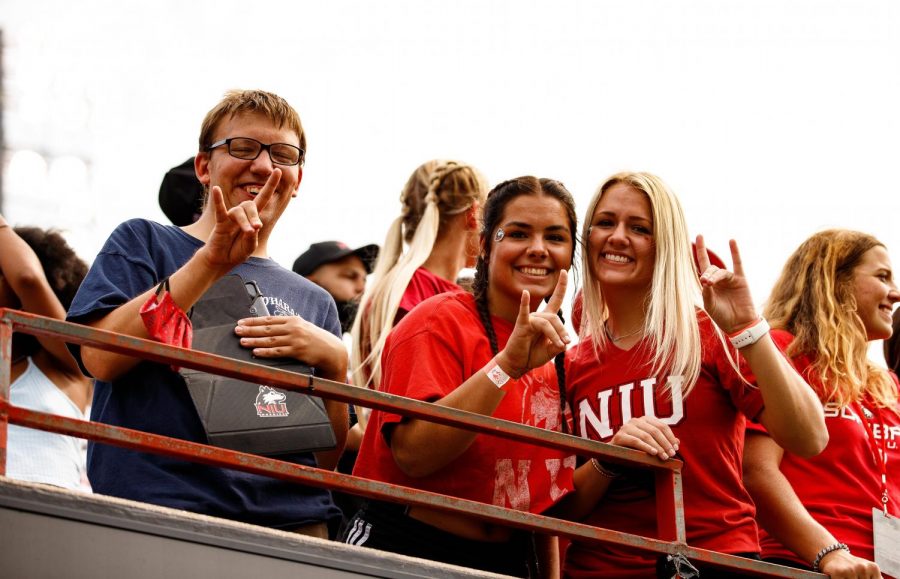 Fans throw up the Huskie symbol at Saturday's home opener between NIU and Wyoming. The reported attendance was 11,334.

DeKALB — Two hours before kickoff on the west side of Huskie Stadium, a voice rings out in joy from a lawn chair under a red canopy.

The voice belonged to Terry Clemans, a two-time letter winning NIU offensive tackle who graduated in 1987.

Clemans has been coming to games since he graduated from NIU, and he and his wife Kay are donors to the university that Terry said: “changed his life” with a football scholarship.

Clemans and his wife sit across from his teammate on the 1983 California Bowl winning NIU team, the bowl game’s MVP, former fullback Lou Wicks and his wife, Kim. The Wicks family has been coming back to the stadium that used to cheer Lou on since 2009 when their daughter began working for the NIU Athletics video team.

In his playing days, Lou Wicks was part of a three-headed rushing attack with Darryl Richardson and Tim Tyrrell. Now, he and Kim make the trek from central Illinois to DeKalb for a few home games a year to hang out with old teammates like Clemans.

From traveling to the Vanderbilt game in 2019 to sitting at home on Saturdays in 2020, it was hard for Lou and company not to see each other on game days.

“It was difficult,” Lou Wicks said. “We had such a good time going down to Nashville the year before, and we have a lot of good friends we like to meet here on a regular basis. Being away from that was awful hard. Out here, it does (feel normal.) We’ll head back to the hotel and have to be masked up again.”

NIU had to put its traditions away, clear its campus and classrooms for nearly 18 months in the interest of public safety. COVID-19 rendered NIU into the same thing every other school was becoming, a wall of faces on Zoom and assignments done off laptops. Alumni across the country lost the things that drew them back to NIU. There was no parent day, no homecoming, and no football.

All anyone could do was wait with the lingering fear that they would either forget or become forgotten themselves.

When 11,334 fans packed into Huskie Stadium on Saturday to see NIU play the University of Wyoming Cowboys, everyone in attendance reassured the school and each other that they hadn’t forgotten.

When the Huskies were deep into their comeback from trailing 42-16, the sideline employed the crowd to bring the noise on a Wyoming possession. The fans did, and the Cowboys were flustered enough to go three and out.

It’s the energy fans provided Saturday that will help revitalize interest in the traditions and history of NIU that got put on the backburner in Spring 2020. The energy of games at Huskie Stadium will inspire other student athletes to come to NIU and carry on those traditions.

Through events like Saturday is how NIU transitions to what normal will resemble in a post-COVID-19 world, and it’s the return to normal that will help make NIU a place that changes lives like it did for Terry Clemans.