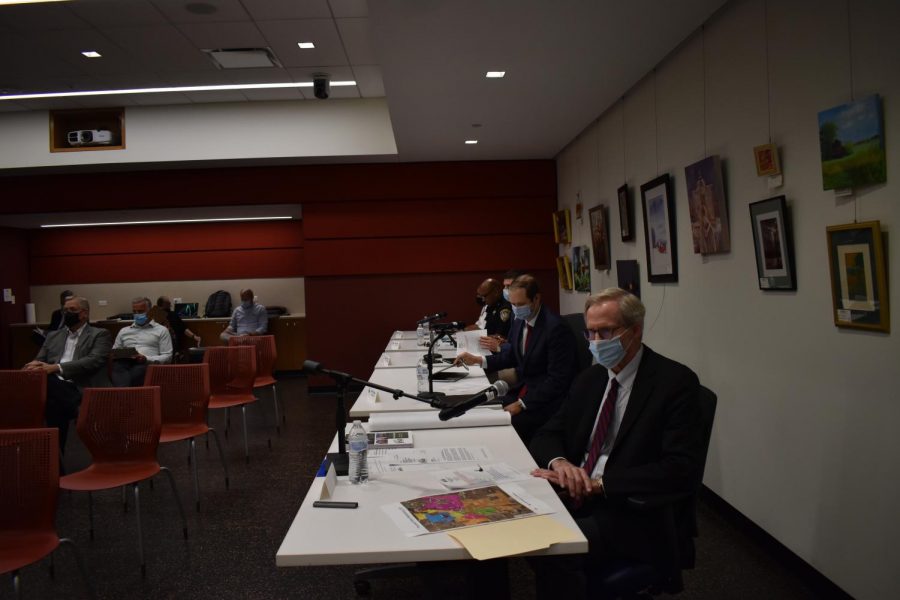 City Manager Bill Nicklas at the City Council meeting Monday, talking about new financial plan that will be used from 2022 through 2024.

DeKALB – The DeKalb City Council passed an ordinance on first reading 8-0 Monday to implement a citizen police review board.

“I think it’s incredibly important that we have a review board outside of the chain of command, as we’ve seen in many instances nationwide,” City Clerk Sasha Cohen said. “This concept of self-investigation has failed over and over again. So I commend you for instituting or hopefully creating a system in which there will be some form of external review of complaints.”

The purpose of the board is to review closed police investigations in all “use of force” cases and make recommendations to the police department. The board will consist of five citizens who are appointed by the mayor with the advice and consent of the City Council. The citizens will serve staggered, two-year terms.

Cohen still has some complaints against the board.

First, any recommendation the board wants to make has to be filtered through the DeKalb Police Chief David Byrd.

Cohen’s second concern is that the board will only open up investigations if the victim comes forward publicly and will share their name.

“I just wanted to point out from a constitutional standpoint that the Sixth Amendment to the Constitution does provide that anyone accused of a crime or it gives us the right to know who their accusers are, and the nature of the accusations, but I don’t think we have a right under the Constitution to protect someone making an accusation anonymously,” Fifth Ward Alderperson Scott McAdams said.

Fourth Ward Alderperson Greg Perkins said the board is no different from any other group as they assemble information and then bring it to the council. Perkins believes the group is at a good starting point and will continue to be a journey.

Second Ward Alderperson Barb Larson said there are three truths when a tragedy occurs: how one person saw it, how another sees it and the truth of what happened falls in the middle. Larson believes the board will help prevent this.

Council members will take up the ordinance for a second reading at 6 p.m. at the Aug. 27 City Council meeting.

DeKalb City Council discussed shifting the political wards due to the loss of 3,805 people within 10 years.

The State of Illinois requires city political wards to be representatively equal in population, City Manager Bill Nicklas said. Most of the population was lost in ward six.

“The challenge here is not to run the lines through a living room or not the duplex common line or any of those things, and also to recognize that we can’t be perfect in this,” Nicklas said. “We’re trying to do our very best to have approximate equality in the population in these wards.”

By law, towns have to review the wards every 10 years with a certain period of time after the census comes out, City Attorney Matthew Rose said.

Mayor Cohen Barnes brought up concerns that the City Council members may have developed relationships with the citizens or businesses in their wards, which can result in them not wanting to shift their wards.

“It looks like some of the shifts that have been done for the First Ward look like they deliberately acknowledge some of the more natural ways that the roads flow over there,” Morris said.

Morris said she remembers when there was a fire across the street from her but it wasn’t in the same ward as her. She believes the ward shifts will be more logical.

DeKalb City Council passed a resolution 8-0 to grant an award of $1.7 million for a construction services contract to Curran Contracting Company for Illinois Route 23 and Gurler Road improvements.

The City of DeKalb did not have the funds for major funding of the project from public services. They were approved for a grant by the Illinois Department of Transportation Economic Development Program.

The intersection will have to be widened for trucks to turn and to allow all motorists to be able to maneuver through the intersection safely, according to the Sept. 13 City Council agenda.

Nicklas said he wants this project by the end of this year, or “at least to get a temporary signal across the intersection for the winter.”

Also passed 8-0, Ferrara Candy Company will pay the difference between the current contracting price and the state grant of $1.49 billion for their role in the Economic Development Program.