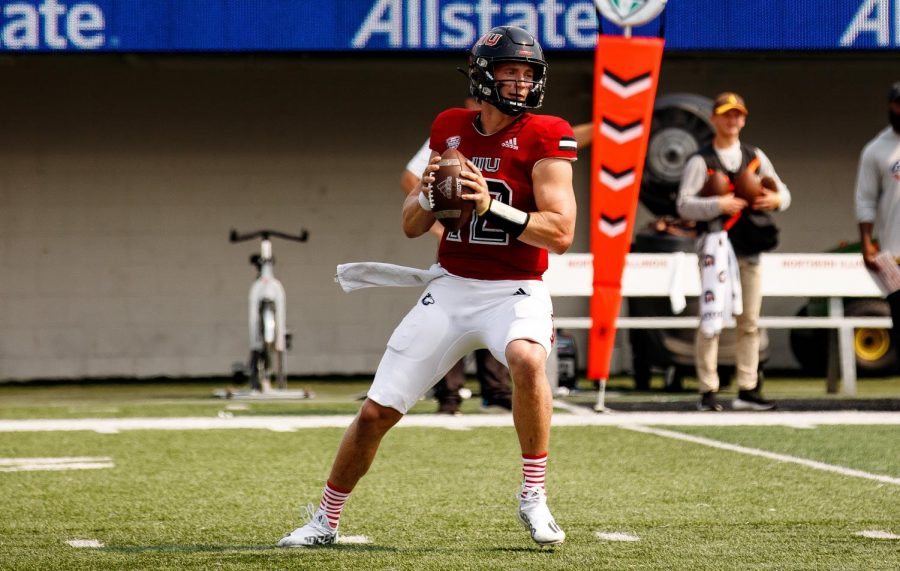 Junior quarterback Rocky Lombardi drops back for a pass on Sept. 11 against the University of Wyoming. Lombardi led his previous school, the Michigan State Spartans, to an upset win over Michigan last season.

DeKALB — The NIU football team’s biggest challenge this year will take place Saturday in the biggest stadium in the country, Michigan Stadium, against the 25th ranked University of Michigan Wolverines.

The Huskies have played back-to-back games decided by one possession. NIU came out on the losing end of their last game, losing 50-43 to the University of Wyoming Cowboys.

Wyoming led 42-16 in the third quarter before the Huskies rallied back to take the lead in the fourth. A touchdown with less than two minutes left by the Cowboys put the nail in the coffin of the 1-1 Huskies.

Head coach Thomas Hammock said the loss outlined where his team needs to improve to “create a brand of football” that will help them find success.

“We needed to play clean, and we didn’t get that done in all three phases,” Hammock said. “We have to create a brand of football that is going to be long standing through the rest of the season. With our ability to run that ball, we have to be great on special teams, and we have to be better on defense. We can’t turn the ball over and give them points.”

The game Saturday in Ann Arbor will be NIU’s first game against a ranked opponent since a 2019 game against the University of Utah. Hammock said the game will show how NIU will measure up later in the year against Mid-American Conference opponents.

“I don’t think we’re going to see this level of physicality all season,” Hammock said. “What a great test for us. What a great opportunity for us to see how we hold up and give us confidence throughout the rest of the season.”

The Wolverines are in their seventh year under head coach Jim Harbaugh, the brother of Baltimore Ravens head coach John Harbaugh who Hammock worked with prior to returning to NIU. Several assistant jobs at Michigan, including defensive coordinator Mike Macdonald, joined the Wolverines this offseason from John Harbaugh’s staff in Baltimore.

“(The Harbaugh brothers) want to start with a physically demanding style that’s going to stress you out and see if you can withstand it for four quarters,” Hammock said. “Michigan is running a lot of plays I’m familiar with that we ran in Baltimore.”

Another Huskie player with a familiarity with the Michigan team is junior quarterback Rocky Lombardi. Lombardi led the Michigan State University Spartans to a 27-23 victory over the Wolverines on Oct. 31, 2020, before transferring to NIU.

“I’ve let coach Hammock do most of the talking,” Lombardi said on preparing the team this week. “The time will come where I’ll say what I need to say too, but as of right now, we’re just focusing on what we need to do.”

The defense will try to wrangle a pair of dangerous running backs, sophomore Blake Corum and senior Hassan Haskins. Corum and Haskins both rushed for over 150 yards against the University of Washington last week, with coaches emphasizing a group tackling effort on defense.

“Our coaches are on us about gang tackling,” said Zhamaine March, junior cornerback and Detroit-native. “We got to get better at that. We’ve started focusing on that in practice. I think we’ll look good out there.”

The Huskies and Wolverines kick off at 11 a.m. CST Saturday in Ann Arbor, with the broadcast being carried on the Big Ten Network.