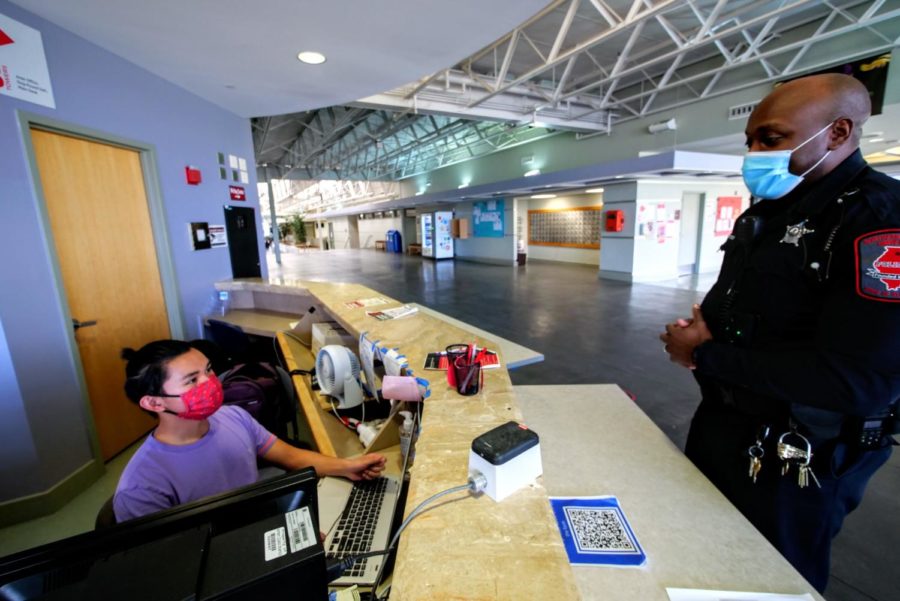 Officer Larry Williams talks to student at the front desk of Stevenson Towers.

Representatives from Public Sector Search and Consulting conducted two listening sessions from 6-7 p.m. Sept. 8-9 via Zoom to gather student input about what attributes the next NIU chief of police should possess. Outside of the two hosts and one guest, these meetings were met with a disappointing lack of attention from NIU’s student body.

The Northern Star Editorial Board believes these meetings held valuable importance to the student body, and to see a turnout of essentially only one person was concerning.

To fill the NIU chief of police position is a decision that affects everyone that steps onto campus. The role of police in society has been viewed under a microscope in the wake of an ever-growing list of police brutality victims within the United States.

Not only do American citizens want change, but a very vocal group of NIU students have also advocated and protested for change. Around 80 protesters gathered at the DeKalb Police Station to rally against police brutality in solidarity with George Floyd, with protests spanning across the country, according to a June 1 Northern Star news article. Providing quick input goes a long way to making big steps that will benefit not only NIU but communities around the country.

Each student at NIU comes from a different walk of life with a different set of responsibilities, and the very least of worries a student should have is if they can trust the police working on their campus.

The Public Sector Search and Consulting didn’t have to hold these listening sessions either. The voice of the students could have been ignored for the decision of the upcoming NIU chief of police, but the voice of the students has value upon this hiring. The willingness to listen to student input speaks volumes, even though it is just a small step to create big change.

Each student at NIU has a voice, and that voice counts. With the same three people showing up both nights of  the listening sessions, two of which were hosts, the Northern Star Editorial Board felt that the NIU student body dropped the ball to provide feedback on a hiring that impacts all of us.

Students should be on the lookout from the university for any opportunity to provide any further input. Students can also contact the Public Sector Search and Consulting on their contact page or contact the Department of Police and Public Safety at niupd@niu.edu to make their voice heard.

One misstep doesn’t derail the mission; the student body at NIU is made up of strong-spirited individuals who care about their community. Whether it’s at the local or national level, be the change that you want to see.