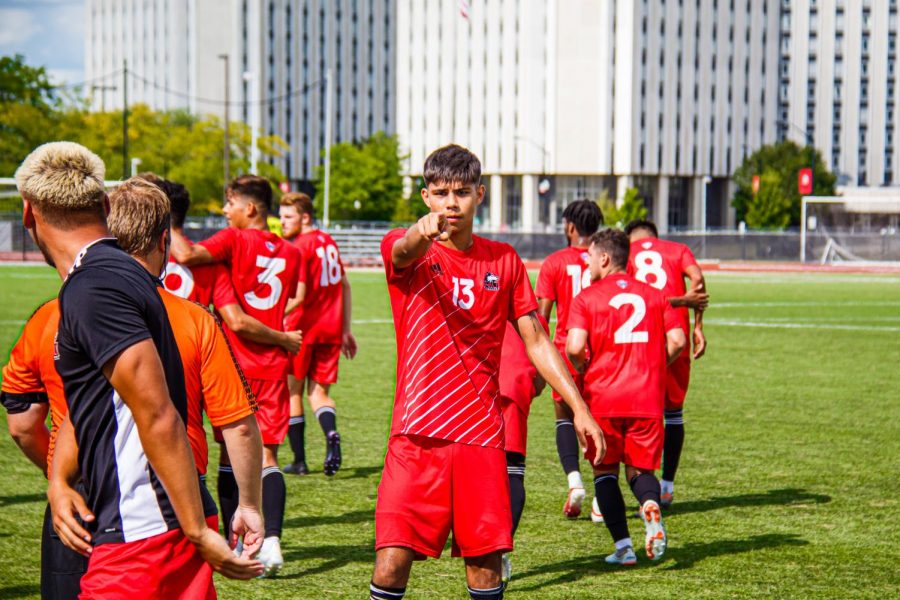 DeKALB — An offensive second half flurry leads NIU to a 4-0 Lewang Cup victory over the University of Wisconsin-Milwaukee Panthers for their fourth straight win and third by way of a shutout.

“It was the first game of the season where we were playing for a trophy,” head coach Ryan Swan said in a Sep. 14 NIU Athletics news release. “It added a little spice to the game and the guys responded exceptionally well and put in a fantastic performance.”

Both teams came out of the gate slow as defense was the name of the game. Shots by senior defenseman Anthony Markanich and redshirt junior forward Enrique Banuelos just missed the back of the net. There was no score at halftime.

“There is a lot of confidence around the team right now,”  Swan said. “In the last few games, we had been scoring goals early, so this was a new challenge, going in 0-0 at halftime. It was great to see that it didn’t faze the guys at all. They are bought in. They knew the chances were being created and that more would come.”

In the 48th minute, a direct corner kick goal by senior forward Miguel Maynez Jr. lifted the Huskies to a 1-0 advantage. A lead they wouldn’t give up for the rest of the game.

In the 71st minute, senior forward Nick Markanich continued his hot streak as he dribbled around the only defender to score. Markanich was assisted off a through ball by junior defenseman Adrian Lara.

Only five minutes later, in the 76th minute, NIU continued to add to the lead as freshman forward Zachariah Thomas scored his first goal of the season on an assist by sophomore defenseman Malcolm Ward.

The night’s final tally came late in the 83rd minute as Banuelos flicked a pass to Anthony Markanich, who put the ball in between the posts to finish the Huskies rout of the Panthers 4-0.

The Huskies held the Panthers to only six shots with two on goal, while NIU packed on the opportunities finishing with 19 total shots and six on goal.

NIU will look to build off their impressive win streak as they come home to face the Western Illinois Leathernecks at 5 p.m. on Saturday.