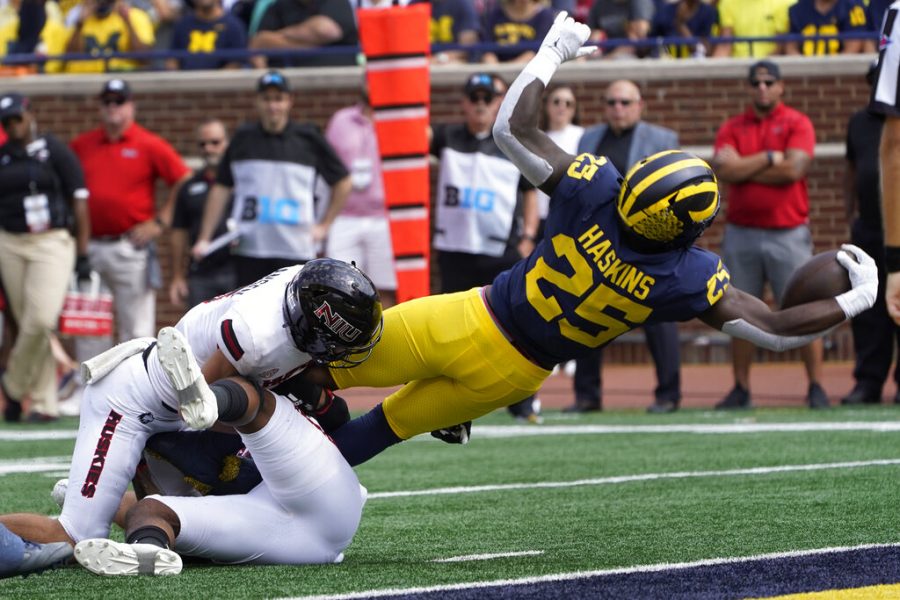 Michigan running back Hassan Haskins (25) dives into the end zone for a five-yard touchdown run against Northern Illinois in the first half of a NCAA college football game in Ann Arbor, Mich., Saturday, Sept. 18, 2021.

ANN ARBOR — The 25th ranked University of Michigan Wolverines were too much for NIU, running roughshod over the Huskies 63-10 Saturday at Michigan Stadium.

Head coach Thomas Hammock said openly after the game that the Jim Harbaugh-led Michigan squad was the superior team.

“They beat us soundly in all three phases of the game, and that’s on me,” Hammock said. It’s not on our players. There’s nothing we could do. That was the better football team. To say anything of the sort as to what happened, that was a better football team than us.”

Meanwhile, NIU was unable to come up with a way to penetrate the Michigan defense. Redshirt freshman running back Harrison Waylee, after four straight 100-yard rushing games, only managed 38 yards.

Hammock said the game was a chance for NIU to see the type of style they’ll try to emulate.

“They were more physical than us,” Hammock said. “We battled, competed and fought. We should build confidence in that. That’s the best team we’ll play, and I wouldn’t be surprised if they stick to that style of play that they’ll win a lot of football games. They’re a team we can emulate in terms of playing with a physical, smart mentality in all three phases.”

The tough pass rush of the Wolverines minimized junior quarterback Rocky Lombardi’s role in the offense. Lombardi only had 17 attempted passes and threw for 46 yards. The only Huskies touchdown came in the fourth quarter when Lombardi found redshirt junior wide receiver Cole Tucker on an eight-yard touchdown pass.

Lombardi said he’ll trust in whatever the game plan requires week-to-week and expects he’ll get more opportunities to air it out in the future.

“It’s just about how I can help the run game,” Lombardi said. “It’s going to be a different game each week.”

The Wolverines route started with a one-yard touchdown dive from junior quarterback Cade McNamara on their opening drive.

The Huskies’ only points of the half came on the following drive, highlighted by a 15-yard catch by redshirt freshman Tristen Tewes and a 16-yard keeper by Lombardi. NIU had to settle for a 21-yard field goal by redshirt sophomore kicker John Richardson to make it 7-3.

From there, Michigan was in full control. Sophomore running back Blake Corum scored a goal-line touchdown to make it 14-3 at the end of the first quarter.

Michigan senior running back Hassan Haskins had a pair of rushing touchdowns in the second quarter on back-to-back drives. Meanwhile, NIU only managed one first down that didn’t come off a Wolverines penalty.

The longest play of the game came on an 87-yard touchdown pass from McNamara to junior wide receiver Cornelius Johnson to make it 35-3 right before halftime.

The Wolverines continued to pour it on in the third quarter with 28 points. Corum had two more rushing touchdowns, including a 49-yard touchdown within the first two minutes of the half.

Freshman running back Donovan Edwards had two rushing touchdowns in the third quarter as well. Edwards scored his first shortly after a Lombardi pass was intercepted by senior defensive back Gemon Green.

The second Edwards touchdown run was the longest of the day, a 58-yard dash, that made the score 63-3 at the end of the third quarter.

The only Huskies touchdown was set up by a bizarre penalty on Michigan as two players wearing the same jersey number were on the field during a punt return. The new set of downs for NIU was followed by a 45-yard keeper by Lombardi to put NIU inside the ten.

Lombardi found Tucker on an eight-yard pass with 8:28 remaining. NIU held the Wolverines out of the endzone on their final two drives, but the final score still remained 63-10.

NIU falls to 1-2 but returns to DeKalb next week to close their non-conference schedule. The Huskies face the University of Maine Black Bears at 1:30 p.m. Saturday at Huskie Stadium.