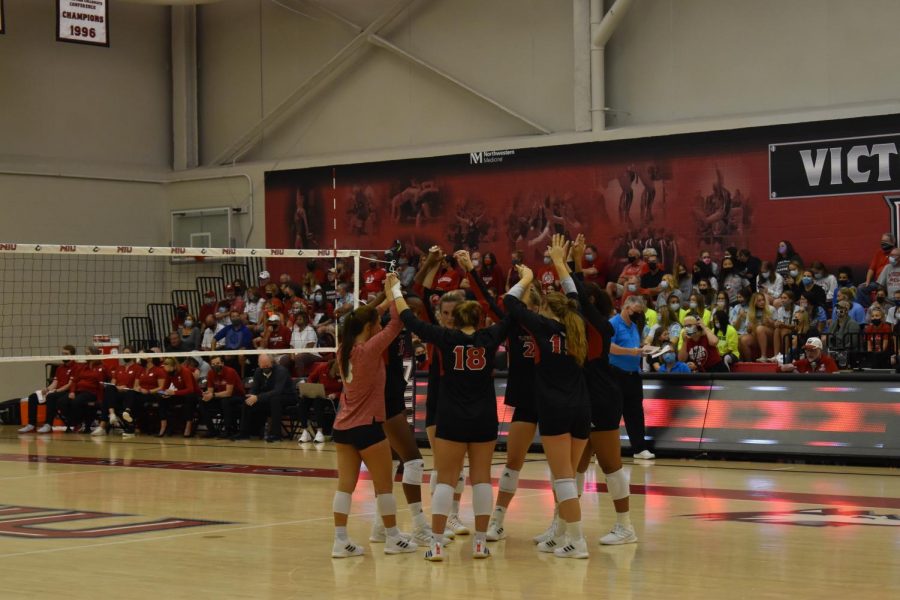 The volleyball team huddles during the first set of their matchup on Sept. 18 against Wisconsin.

DeKALB — The NIU volleyball team was unable to match the energy and play of the second ranked University of Wisconsin Badgers, losing in straight sets 3-0.

The Huskies were able to keep up with the Badgers, putting in a good effort from the jump. The team got out to an early 2-0 lead after sophomore setter Ella Mihacevich got a kill followed by a hitting error by Wisconsin sophomore middle blocker Devyn Robinson.

After the Badgers were able to tie up the game at 4-4, Huskies freshman defensive specialist Francesa Bertucci got a dig on a Badger kill attempt leading to a huge block by junior outside Katie Jablonski. The play sent the sell out crowd of 800 fans on their feet as the Huskies were able to take a 5-4 lead.

The teams would trade off points back and forth in the set, with the score being tied at nine different points throughout the set. With the score tied at 9-9, Jablonski put down another kill, and momentum started to swing in the Huskies’ favor. However, a review and delay of nearly five minutes seemed to kill that.

“I thought we were doing a really nice job until that little momentum spot there with the replay. We were doing the things we should do to win,” head coach Ray Gooden said.

Coming out of the replay, the Huskies were not playing with the same energy, and the Badgers would show why they are the number two ranked team in the country. The Badgers were able to go on a run with a kill from freshman outside Julia Orzol, who was dominant throughout the whole game and was a point of emphasis for the Huskies.

“She (Orzol) had a great night the other night against Green Bay, we knew she was gonna attack at a high level, and we tried to do our best to slow her down by managing her with our serving and passing,” Gooden said.

Orzol’s kill ignited a huge 10-2 run for the Badgers. During the run, Robinson was able to block three of Jablonski’s kill attempts in a row before the Huskie outside finally put one through.

It would be Orzol who would come back with three straight kills of her own to give the Badgers a commanding 19-11 lead. The Badgers would hold on to win the first set 25-16.

The second set picked up right where the first ended, with the Badgers getting out to an early 10-4 lead. The Huskies were able to pull back into the game, cutting the lead to 13-9. The Huskie defense started to unravel as they couldn’t keep up with anything coming from freshman outside Lauten Jardine. Jardine got three kills in a row, prompting a Huskie timeout with the deficit now 16-9.

The Badgers would close out the second set with the help of middle blocker Dana Rettke, who got a kill and two blocks to close the set out 25-11.

The Huskies don’t have much time to dwell on the loss with Mid-American Conference matchups starting next week. The team returns to action at 5 p.m. Friday on the road against the Central Michigan University Chippewas to kick off the MAC season.