Four touchdowns from Lombardi lead NIU to 41-14 win over Maine, pushing their record to 2-2 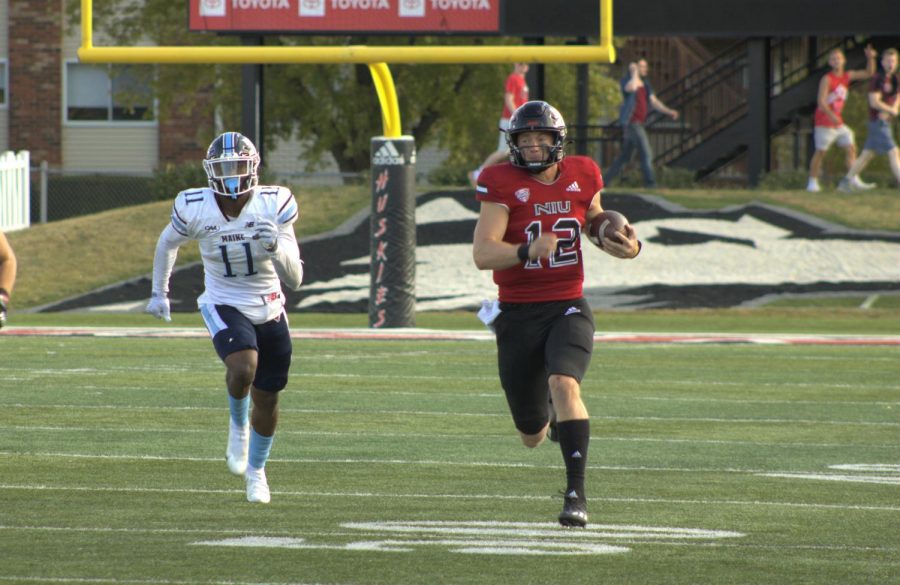 Junior quarterback Rocky Lombardi (right) runs with the ball with Maine sophomore defensive end Khairi Manns in pursuit. Lombardi scored on this play for his second of three rushing touchdowns.

“I’ve played quarterback my whole career in mostly pro-style offenses, so I haven’t had a ton of work at (rushing),” Lombardi said. “Coach Hammock recommended some drills for me, some small things to help me out. For me, it’s just about getting reps in the run game, and you’ve seen how I’ve improved already, and you’ll see how I continue to improve.”

The Huskies’ defense shut out the Black Bears offense in the second half, including preventing points when Maine had a goal to go. Hammock said his team made adjustments at halftime and simplified their defense going into the game.

“We made some nice adjustments at halftime to the formations they were giving us,” Hammock said. “We made things simpler on defense. That was the game plan our coaches made to put our players in the best position. I think we’re going to continue to do that.”

Sophomore cornerback Jordan Gandy anchored the defense with two tackles for a loss and two pass breakups. Despite the second half performance, Gandy believes his unit needs to start games better.

“We have to work on starting as well as we finish,” Gandy said. “We have to come out with better energy, and we have to have better starts.”

Maine answered with a 99-yard drive that was finished with a 28-yard touchdown from sophomore running back Freddie Brock. The touchdown left the score tied at the end of the first quarter.

While his touchdown run put NIU in front 21-14, an interception thrown by Lombardi to Maine senior cornerback Richard Carr ended a potential scoring drive before halftime.

NIU opened the second half scoring with a 27-yard field goal by redshirt sophomore kicker John Richardson but put themselves in danger when a botched handoff by NIU gave Maine great field position.

The Huskies’ defense bent but didn’t break, and the Black Bears failed to convert a 23-yard field goal.

Lombardi and company blew the game open in the fourth. After a 66-yard catch and run by Tucker, the Huskies picked up another field goal by Richardson. Lombardi ran untouched for a 64-yard touchdown on the next NIU drive.

The Huskies put an exclamation point on the win with a forced turnover on special teams. Sophomore linebacker Nick Rattin forced a Maine muffed punt that fell right into the hands of redshirt junior long snapper Erik Abrell.

Lombardi, who had never scored a rushing touchdown in his college career prior to kickoff, picked up his third touchdown on the following play to make it 41-14.

NIU moves to 2-2, their best start to a season since Hammock took over the program in 2019. The Black Bears move to 1-3.

The Huskies open their Mid-American Conference schedule next week in their homecoming game, hosting the Eastern Michigan University Eagles at 1:30 p.m. Saturday. The broadcast will be on ESPN+.