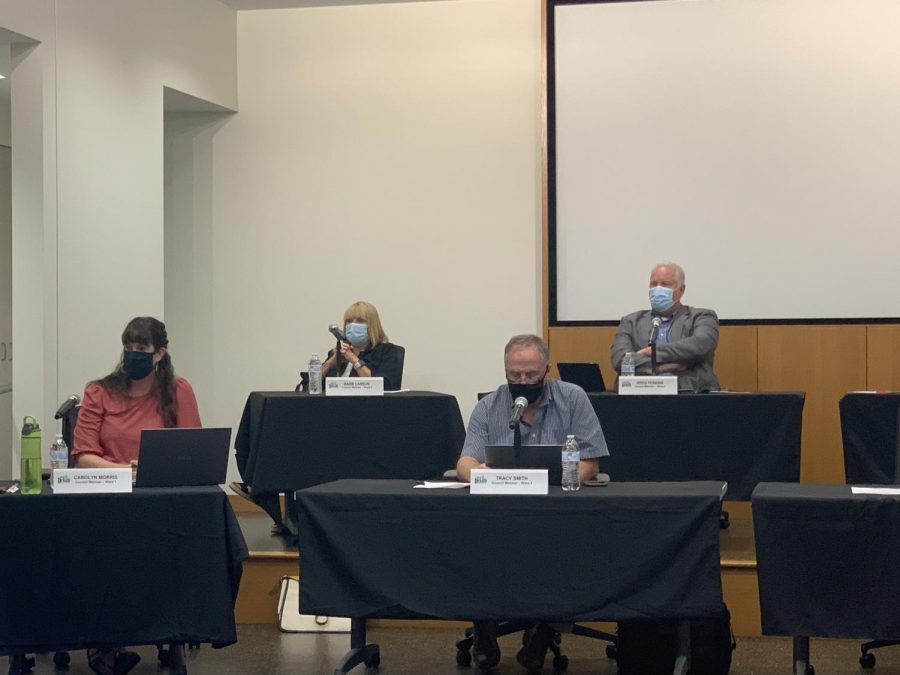 DeKALB – The City Council passed a motion 7-0 Monday to table an ordinance to implement a citizen police review board after several residents voiced their concerns. The ordinance passed on first reading at the Sept. 13 meeting.

Several DeKalb residents spoke in front of the council to share how they feel about the citizen police review board and how sexual assault survivors should not be forced to tell their stories publicly.

The purpose of the board is to review citizen complaints about officers and make recommendations to the police department.

“At this point, I believe that the citizen review board is a step in the right direction, but what we really need to do is a sprint,” DeKalb resident Andrew Tillotson said. “There is a lot to be done to repair trust with the DeKalb Police Department and the community at large.”

Residents went to the podium to share their stories and expressed how hard it was for them to even tell their friends about what happened.

One woman shared that she was 37 years old the first time she told someone about the abuse she faced when she was 16 to 21 years old.

“Buffalo News conducted a study and found that a police officer is accused of sexual misconduct every five days in the United States, and according to the US Department of Justice, 63% of sexual assaults don’t get reported at all,” DeKalb resident Malena Graddy said.

In regards to the police review board, Graddy believes it is ridiculous for people to have to talk about their assaults so publicly.

City Manager Bill Nicklas responded to the public comments by stating that he was concerned and will take responsibility.

“It concerns me that anyone who reads this (the ordinance) would think that it is the case that the victim would not be held anonymous, and whatever story they had to tell will not remain confidential,” Nicklas said.

Nicklas said the names will be kept private even from Freedom of Information Act requests.

“The ordinance as it’s currently drafted says that that person who’s making the complaint has to state their name on the complaint, that complaint itself that’s stating the name will be kept anonymous from the public,” City Attorney Matthew Rose said.

If one of the five board members slips the name of someone who wished to remain anonymous, they will face prosecution, Nicklas said.

“I do just want to thank everyone who came out and spoke tonight on all various topics they did, took a lot of vulnerability and courage in many ways,” First Ward Alderperson Carolyn Morris said. “That valuable feedback helps us and helps guide us and make the wisest decision, so we can, so thank you for that.”

DeKalb City Council passed a resolution 7-0 to purchase four new police interceptors for $150,000. There will also be lightbars and other things that go on the vehicles, Nicklas said.

There is a delay in getting the vehicles. “So we’re taking steps to accelerate that as much as we can because they’re needed now,” Nicklas said. “Things could fall apart; the faster, the better.”