The Huskies placed three golfers in the top 20 in Columbia, Missouri 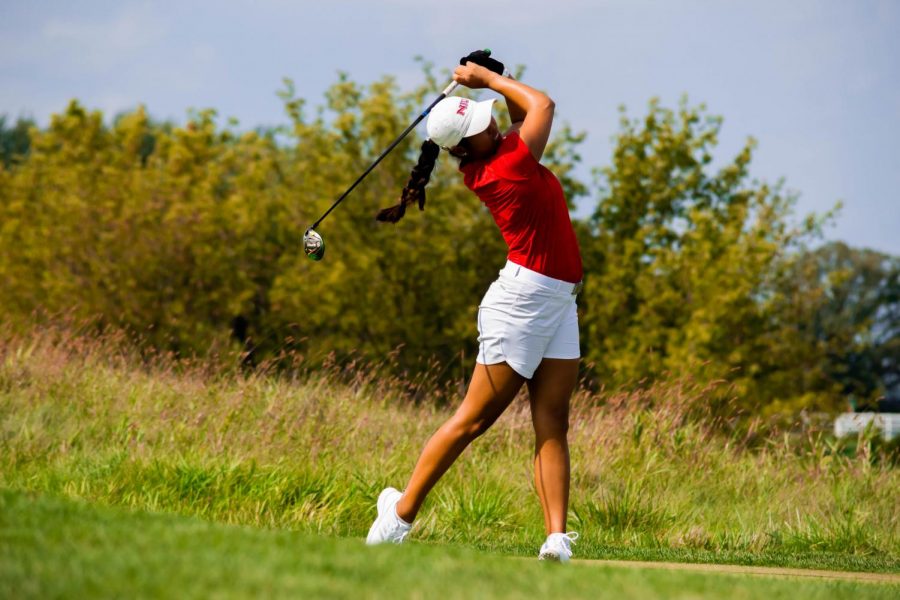 Ly finished the tournament in a three-way tie for fourth place. The feat came one day after men’s golfer Reece Nilsen ended the Badger Invitational as the runner-up on the individual leaderboard.

The first 18 holes of the tournament on Monday saw the five-player lineup produce a 24 to 10 ratio of bogeys to birdies, with double and triple bogeys scattered in between. After the stroke counts of the top four performers were accounted for,  the Huskies were tied for 7th on the leaderboard with Illinois State University at 15-over par.

The second day on the 72-par course saw few changes on the leaderboard for NIU. At the end of day Tuesday, the Huskies added two strokes to their score but had risen in the rankings by one spot.

Entering Wednesday’s final round, the women’s team were in a two-way tie for sixth with Arkansas State University with a duplicate score of 14-over par.

The tournament host, the University of Missouri-Columbia, finished as the top team of the event with a score of one-over par. The women’s team at Missouri was divided into two teams, Missouri and Missouri’s secondary team, which placed 10th.

Adding on to her strong performance at the Redbird Invitational, Ly led the charge once again for the Huskies. After two rounds of tournament play, Ly was ranked fifth out of 76 competitors.

In the final stretch of the invitational, Ly notched three birdies and two bogeys to end the third round one-under par. Ly, the business administration major, concluded the Johnie Imes with a stroke count of four-under par.

“Jas had a great event for us,” head coach Kim Kester said. “She’s coming off a really strong summer. We know we’re gonna get good play from her with how hard she works.”

The event also featured adjustments to the starting lineup compared to the Huskies’ last outing. Junior Ahra Ko, who competed as an individual in the previous tournament, was elevated to line-up for the Johnie Imes. In her first team competition of the season, Ko tied for 16th place.

“Ahra’s been hitting the ball extremely well,” Kester said. “(Ko’s) detail to the putting and everything is really starting to show early on this year.”

Senior Caroline Klemp was not far behind Ko on the individual leaderboard, ending her season debut in a four-way tie for 18th. The decorated transfer from the University of Missouri-Kansas City was selected to compete as an individual at the event, having assumed Ko’s role from the Redbird Invitational.

Despite finishing four spots lower than their last outing, Kester spoke highly of the team’s fight.

“There were some times where we put ourselves in sticky situations,” Kester said. “It was definitely a grind at times, and they really persevered through it.”

With the team preparing to head south to compete at the Pat Bradley Invitational, the biggest focus for the squad will be to improve upon their stroke counts.

“(The big numbers) are what killed us,” Kester said. “We need to definitely reduce those, make more pars, and give ourselves birdie opportunities.”