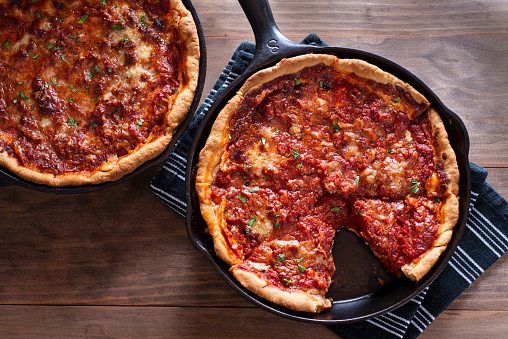 Ask anyone in Chicago, and they’ll have an opinion on deep dish pizza and the best place to get it.

Personally, I love it.

Thin crust pizza is good. Some even call it the true Chicago-style pizza. But deep dish is so much better— it’s not the pride of our city for no reason!

Unlike a New York slice, which is meant to be eaten on the go, Chicago-style pizza is meant to be savored and enjoyed at a sit-down meal. Deep dish isn’t just a meal; it’s an experience.

The crust is buttery and flaky, and it doesn’t sag like a New York slice. Instead, it holds up a delicious mountain of gooey melted cheese and boiling hot tomato sauce.

On any normal slice of pizza, the cheese gets cooked and slightly crunchy. This creates the biggest problem with pizza: having the cheese get pulled off the slice while taking a bite.

But deep dish has solved that problem. Because the cheese is layered in the middle of a deep dish slice, so the cheese can’t fall off.

Instead, there’s the cheese pull. Cutting into a slice (because you can’t eat deep dish with your hands!), the gooey melted cheese wraps around your fork and satisfyingly stretches up and out.

Deep dish is not greasy like thin-crust pizza, either. That’s the genius of having the cheese in the middle and not on the top— it doesn’t get greasy, but it still melts.

The main attraction is the sauce. Any good deep dish pizza will have a nice, thick layer of red tomato sauce on top. And that’s the best part.

The sauce brings the pizza to life with spices, herbs and vegetables, simmered to perfection. By having the sauce on top, the bottom crust doesn’t get soggy and instead stays crispy and sturdy.

By Italian standards, deep dish pizza probably doesn’t even count as pizza. For some, it’s less of a pizza and more of a casserole or a pie. With all due respect to my Italian, pizza-making friends, I’m willing to make an exception for deep dish.

Whether you consider deep dish “real pizza” or not, it’s a Chicago classic, and a delicious one at that.

With New York pizza as the rival to Chicago deep dish, it’s clear which pizza (and which city) is better.

To me, deep dish pizza is always a good idea.