That time I… first visited the Egyptian Theatre 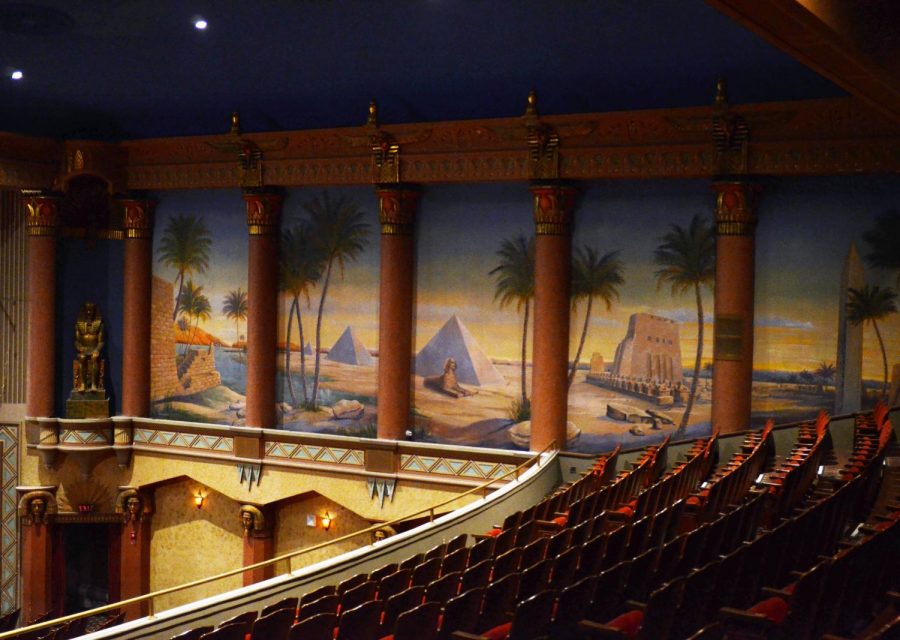 A view of the balcony seating mural in the Egyptian Theatre.

If you were to ask me what my favorite place in DeKalb is, it’s not anywhere on campus. It’s a historic movie theater in downtown DeKalb: The Egyptian Theatre. Over the past three years, I did a lot of coverage of Egyptian Theatre events when I wrote for the Lifestyle section and this coverage has enamored me forever to this stunning place.

I first went to the Egyptian Theatre, 135 N Second St., to cover the first film in a series dedicated to Academy Award nominee and DeKalb native, Richard Jenkins. My editor asked if any of us wanted to cover this beat every Tuesday night for the next eight weeks. Since my journalistic aspirations had been towards film criticism, my hand shot straight up.

When I first approached the theater, I marveled at the sheer scale of the place. Where I grew up, near Champaign, there was a beautiful cinema palace called the Virginia Theatre, but this was something else. All of the Egyptian architecture was outstanding and, with the exception of computer monitors and card payment, looked like it hadn’t been touched in nearly 90 years.

As I sat in the red velvet seats and watched “Dear John,” I found myself not only jotting down my thoughts on the film, but I also kept noticing the theater around me. The way the light of the film bounced off the screen onto the many pharaohs around the auditorium kept my attention, and when I tilted my head all the way up, I noticed there were little lights turning on and off in the ceiling, looking like a night sky.

After the film concluded, I got ready to leave the theater and take the bus back home. However, the bus had already come along a few minutes earlier. Brandon Pugh, event services director at the Egyptian Theatre, saw my predicament and gave me a ride back to Neptune North Hall. I’ve never forgotten that because it reminds me just how much the staff at the Egyptian care about the community of DeKalb as well as NIU’s students.

I covered the rest of the Richard Jenkins film series, even getting the chance to meet and speak with him before a screening of “The Shape of Water,” but I’ve been to the theater many times after as both a journalist and a regular customer.

As a journalist and aspiring filmmaker, I always love going to the Egyptian Theatre. I love to smell the popcorn, to see those friendly pharaohs’ faces and to see one of my favorite films, or a fantastic live act on the stage.

One of my favorite films of all time is the 1988 Italian film “Cinema Paradiso,” about a young boy who discovers a love for film in a local movie house. For me, while my ambitions go far beyond DeKalb, the Egyptian Theatre will always be my Cinema Paradiso.