Fill in the blank: The person behind the Bears issues is… 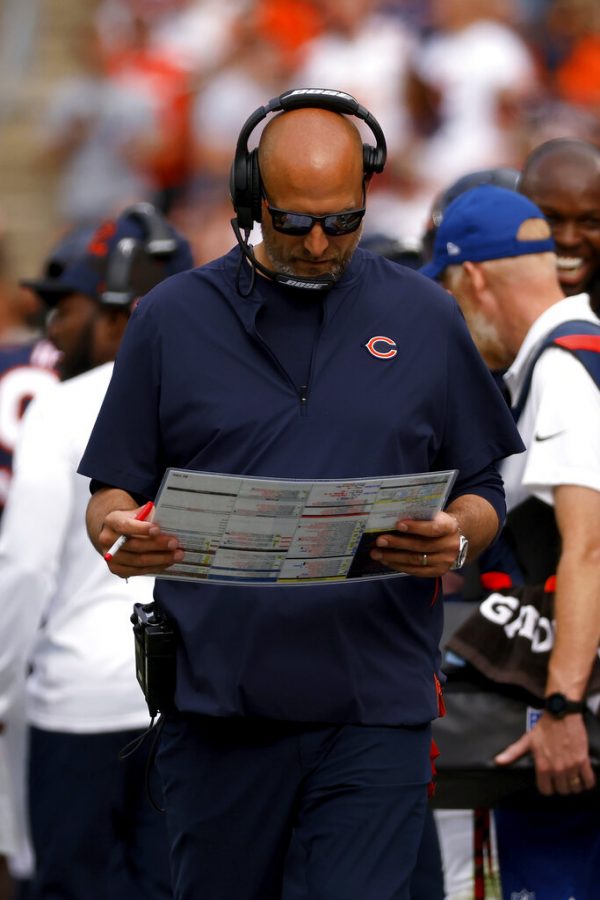 …Matt Nagy
Skyler Kisellus | Assistant Sports Editor
On the heels of an abysmal performance in a humiliating loss to the Cleveland Browns, fans of the Chicago Bears saw major red flags in the case of fourth-year head coach Matt Nagy.

In a game that featured an offensive line whose play mirrored that of a row of blocking sleds, rookie quarterback Justin Fields was sacked nine times. However, the responsibility for this massacre of the backfield does not fall solely on the linemen.

As head coach, it is Nagy’s duty to know and play to the strengths of his offensive personnel. His failure to properly adjust blocking assignments or assign help from the tight ends during Sunday’s game proves his inability to do just that.

Despite starting quarterback Andy Dalton being out with a knee injury Sunday, Nagy’s play calling forced Fields to cater to an offense better suited for Dalton’s skill sets as opposed to Fields’.

Nagy’s failure to adjust, lack of creative play calling and refusal to relinquish said duties countless times make it obvious that he is not the answer the Bears were hoping for.

With the Bears’ history of not firing coaches mid-season, Nagy will likely keep his job through the new year. His next opportunity to let the Chicago fanbase down will be in this Sunday’s divisional matchup against the Detroit Lions.
…The McCaskey family
Noah Silver | Sports Columnist
At the end of the 2020 season, the longtime owners of the Bears decided to give general manager Ryan Pace and head coach Matt Nagy one more chance to prove they could build a winning team for the future, much to the disbelief of every Bears fan.

Following back to back 8-8 seasons in which the Bears ranked in the bottom half of the league in nearly every category, it was a head scratcher as to why Pace and Nagy deserved another shot. It comes down to an unwillingness to change no matter how poor the franchise’s performance is.

It is a well known fact that Bears coaches stick around longer than they should. In the 101 years that the Bears have been a franchise, they have never once fired a head coach in the middle of the season. No matter if you are Dave Wannstedt, Marc Trestman or Nagy it seems.

It has become apparent that no matter the record or performance, the McCaskeys will always opt to retain their management and staff instead of cleaning house and starting over. It comes down to tradition.

Virginia McCaskey, daughter of Hall of Famer and Bears first head coach George Halas, is more focused on the financial aspect of the team. She would rather line her pockets with a mediocre team than to find the right combination to form a dynasty.

Until the family sells the team or until Virginia McCaskey dies, the Bears will be held in management purgatory.
…Ryan Pace
Waleed Alamleh | Sports Columnist
The complete no show of the Chicago Bears’ offense was a coaching problem, but a team only has a performance like Sunday’s when there’s dysfunction from the top of the franchise. All eyes are on general manager Ryan Pace, who barely kept his job last season. Pace has failed to put together the right parts to build a winning and sustainable culture for the team.

Many of the decisions Pace has made over the past six seasons have been questionable to say the least, like the signing and overpaying of backup level quarterbacks like Mike Glennon, Nick Foles, and Dalton to be starters.

Wasting cap space means sacrificing depth and strength at another position for the Bears; it’s the offensive line. The Bears have only invested $15.8 million invested in the offensive line, which is 29th in the NFL, according to Sportrac.com. Not the best group to protect your new, highly drafted first round quarterback in Fields.

The Bears need to move on from Pace before he ruins the development of Fields like he did with Mitch Trubisky, the second overall pick in the 2017 draft. Pace then hired Nagy a year later to help Trubisky improve as a quarterback.

Nagy has shown that he’s not even capable of making veterans play better, so allowing him to try it again with Fields is going to be the downfall for him and Pace this season.