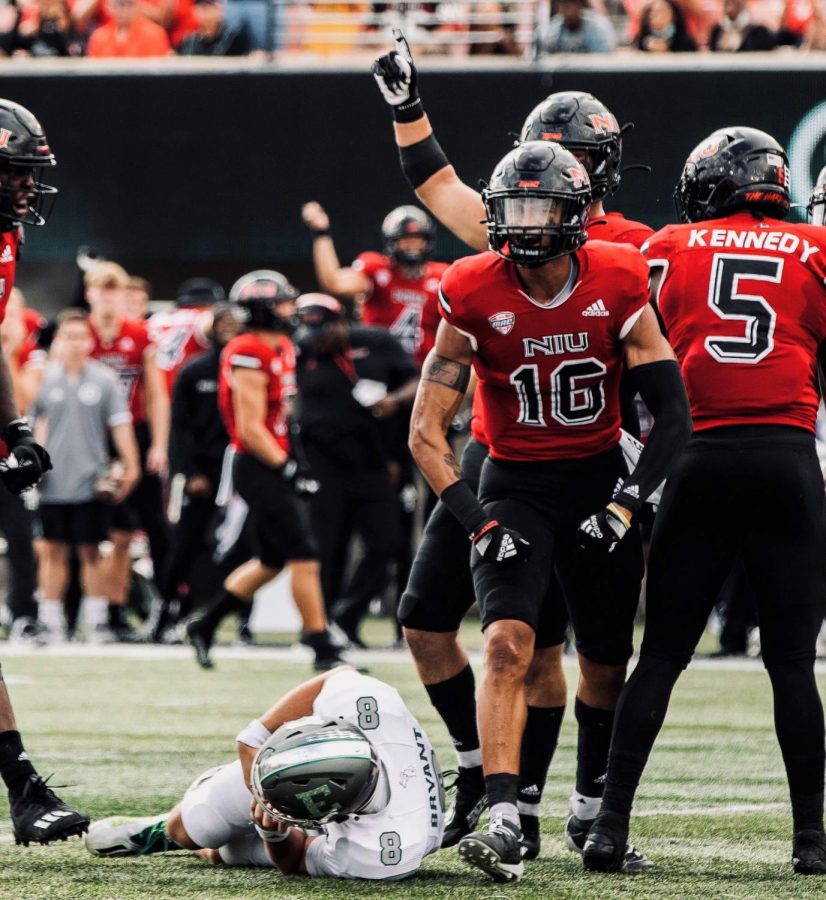 DeKALB — The Huskie football team weren’t derailed by either a lengthy delay or a late charge by the Eastern Michigan University Eagles in their 27-20 victory Saturday.

NIU picked up the victory despite having their momentum stalled by a two-hour and 45-minute lightning delay and a plethora of injuries, including to freshman running back Harrison Waylee.

“I love the resolve of our football team,” head coach Thomas Hammock said. “We’re used to playing tough games, and this was another tough game against a quality opponent in Eastern Michigan.”

In place of Waylee, freshman running back Antario Brown had 101 rushing yards in his first appearance for the Huskies. The performance of the Savannah, Georgia native meant a lot to Hammock, who’s seen Brown develop since he first saw him in high school.

“(Brown) is very special to me,” Hammock said. “I was the first coach to get a hold of him in the recruiting process, and I stayed on him. We built a bond and a relationship over that time, over COVID-19. He’s a heck of a kid, been through a lot of adversity.”

NIU had a season-high five sacks of Eagles senior quarterback Ben Bryant with redshirt junior linebacker Dillon Thomas. The defense also forced their first interception, in which COVID-freshman Jaden Dolphin returned 59 yards for a touchdown just three plays after returning from the delay.

Dillon Thomas said the delay itself was a mix of emotions as Hammock tried to keep the Huskies prepared over the course of the stoppage.

“It was like a mini-roller coaster,” Thomas said. “We left before the lightning strike, and we were having a blast just playing great football. You want to keep that energy going, but Coach Hammock came in and sort of told us to chill out. I know it helped me to calm down, and slowly, we started to pick our energy back up and get ready to go out whenever.”

The Huskies were winning the battle at the line of scrimmage early, sacking Bryant three times in the first quarter.

After the weather delay, the Huskies picked up in the second quarter, where they left off defensively. Dolphin picked off a deflected pass by Bryant and returned it 59 yards for a touchdown.

The scoring for the rest of the quarter was limited to a 47-yard field goal by EMU junior kicker Chad Ryland before halftime, making it 17-3.

EMU put their offense in gear in the second half, with Bryant finding junior wide receiver Hassan Beydoun for 45 yards on their opening drive. Bryant also connected with senior wide receiver Bryson Cannon for a 42-yard touchdown pass.

After an injury sidelined Waylee in the second quarter, Brown helped keep the Huskies’ offense on track. A 13-yard run by Brown set up a touchdown rush by redshirt senior running back Clint Ratkovich. Brown said his teammates did a lot to settle his nerves before his first live snaps at the collegiate level.

“I’m going to be honest, I was nervous,” Brown said. “My heart was beating out of my shirt, but the older guys, the veterans, they kept me up. From fall camp, knowing what I could do and the defense giving me good looks, I just remembered my training and played.”

Another touchdown pass by Bryant, a 17-yard completion to junior wide receiver Dylan Drummond, made it 24-17 at the end of the third quarter.

EMU looked on pace to tie early in the fourth before a sack by Dillon Thomas led to a fourth and seven. What was originally ruled a completion on the field was ruled a pass break up by COVID-freshman cornerback Myles McGee to force the turnover on downs.

NIU took nearly seven minutes off the clock on their next drive, forcing EMU to burn all of their timeouts. NIU extended their lead with a 26-yard field goal by Richardson.

With time low, EMU made quick work to get into the Huskies’ red zone before being forced to kick a 31-yard field goal. The Eagles attempted an onside kick and recovered, but an offsides penalty meant a replay of the kickoff. NIU recovered the ensuing retry and ran out the clock for a 27-20 final.

NIU heads on the road next week to face the University of Toledo Rockets. Kickoff is scheduled for 11 a.m. Saturday in Toledo, Ohio, with the game being broadcast on the CBS Sports Network.