COLUMN: How NIU weathered the storm to beat Eastern Michigan 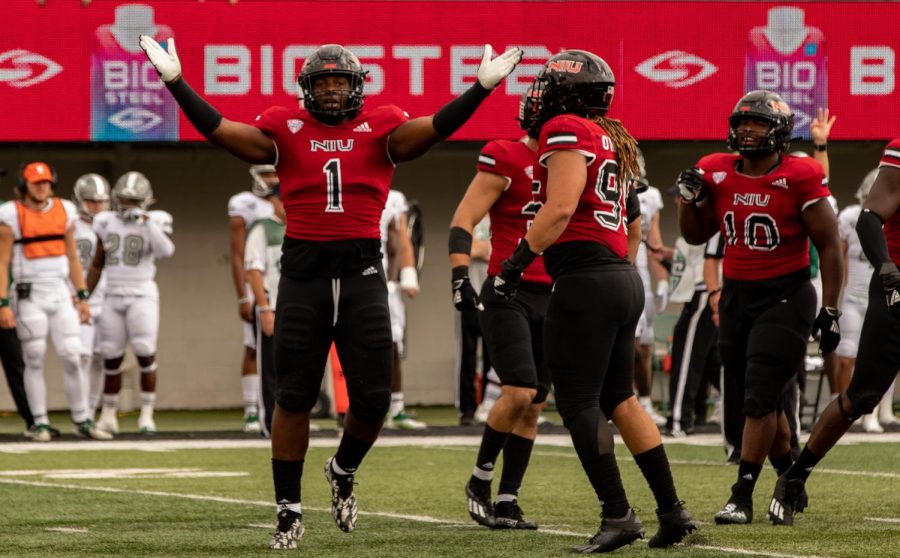 Redshirt freshman defensive end James Ester celebrates a sack in the first quarter against EMU on Oct. 2. The Huskies beat EMU 27-20 to move to 3-2 overall.

Food isn’t typically a priority for a head coach during a football game, but the conventional is thrown out over the course of a two-hour and 45 minute lightning delay.

Head coach Thomas Hammock praised those like Daniel Koenen, director of Dining Services, and others for their help to keep his team prepared for the remainder of the football game that NIU won 27-20 against the Eastern Michigan University Eagles on Saturday.

“We wanted to get them something to eat,” Hammock said. “The dining services did a great job. We called over and they delivered within 30 minutes so our guys could get something to eat and fuel up their bodies…I thought our strength and conditioning team did a great job keeping guys stretched out, keeping them loose.”

Koenen and his team worked quickly to send over 50 pre-packaged sandwiches and enough deli meat and bread to make a few dozen more. Koenen said the rush during the delay was on the extreme and high pressure end of something dining services does all the time.

“This was probably a bit more extreme,” Koenen said. “We had all the locations in the Holmes Student Center open, so we had plenty of staff there. You don’t know how much time you have because they could’ve restarted before we got there. There are times when someone calls us up last minute and we do whatever we can to accommodate.”

Hammock wasn’t a stranger to lengthy delays. In the post-game press conference, Hammock referenced a weather delay in 2004 while a graduate assistant at the University of Wisconsin as the road team against the University of Arizona. Hammock said he’s glad his second go-around with delays came while at home.

“I’m so glad we were at home,” Hammock said. “We had excellent hospitality. We were using the indoor (field) to keep them fresh and engaged.”

The coaches doubled as managers of the health and energy levels of the teams. Redshirt junior linebacker Dillon Thomas, who won Mid-American Conference Defensive Player of the Week for his two sacks against EMU, said Hammock told the team to take time to chill out.

“I felt the overall mood of the locker room was good and loose,” Thomas said. “I laid down, took my cleats off and put my feet up. Everyone was vibing, just making sure we stayed focused and that we were loose and ready.”

Out of the delay, the Huskies’ energy maintained came through almost immediately. The Huskies tipped two passes by EMU senior quarterback Ben Bryant, the second being intercepted and returned for a touchdown by freshman linebacker Jaden Dolphin.

“I thought our players just did a great job relaxing,” Hammock said. “When you’re in a situation that’s unfamiliar to all of us, you have to relax. They handled it and how about it, a pick-six coming out of the break. How about it?”

The win Saturday marked NIU’s first victory while scoring a defensive touchdown since Oct. 29, 2019 when the Huskies shut out the University of Akron 49-0. Along with 101 rushing yards from freshman running back Antario Brown and the quick work of the likes of dining services, the victory Saturday may have redefined the meaning of a “team effort.”

NIU will try to extend their winning streak at 11 a.m. CST Saturday with a road game against the University of Toledo Rockets.