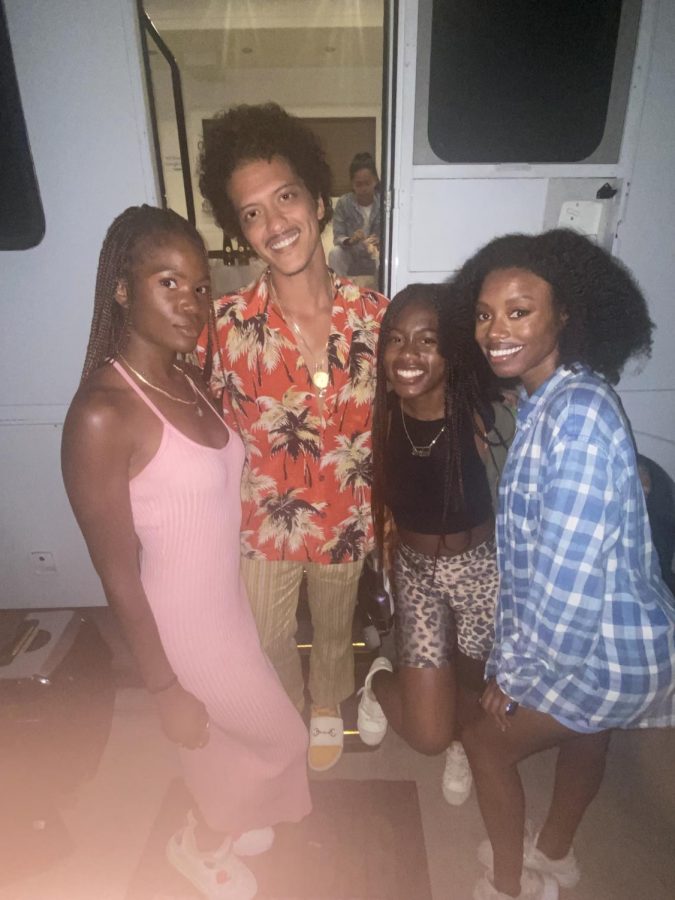 Chérie grew up in Rockford and attended NIU from 2017 to 2018, where she worked at the Northern Star as assistant digital editor. Chérie graduated from NIU with her bachelor’s in communications with an emphasis in media studies.

Chérie received an Instagram direct message saying that there was an opportunity she might be interested in and to send her direct contact information. She sent her information and in less than an hour got a phone call and went to the fitting the next day, said Chérie.

Chérie didn’t know who the music video was for until the day of the fitting.

“They’re like, ‘ok everybody, Bruno would like to see you.’ I’m like, ‘Bruno?’ And we walk into a room which is like a bigger dance studio and exactly how the music video is set up. It’s like Bruno, Anderson and the rest of the band,” Chérie said. “They’re like, ‘hey ladies!’ I’m Bruno Mars, this is Anderson .Paak, you can call him Andy, we’re Silk Sonic. We have this new song, we just want to play it live for you.”

While filming, Chérie couldn’t tell anyone about the music video until it had been released online.

“Everyone reached out, my family reached out, they just all were so proud and so excited for me,” Chérie said.

“I watched it, and the entire time, I was like, ‘that’s my friend, that’s Cierra right there!’” Grunauer said. “Bruno Mars always does like interesting music videos that definitely make you want to dance, and so it was just cool to see like roller skating girls in the background because I feel like during COVID roller skating really picked up again.”

Chérie knew she wanted to be in Los Angeles, California, after having visited multiple times, including a creative producing program at UCLA that she had over Summer 2017. A month after graduating from NIU, Chérie packed up her car and drove to California and has been living in Los Angeles ever since.

“My day job is more behind the scenes, so we do commercials, music videos and sometimes interviews,” Chérie said.

“Skate” is the second single from Bruno Mars and Anderson .Paak’s Silk Sonic’s upcoming album, according to the Rolling Stone.

“I learned a new level of excellence from Bruno Mars and Andy as well as some of the other roller skaters,” Chérie said. “They were on the whole time, like as if they just put their skates on five minutes ago, they were ready to perform, they were high energy.”