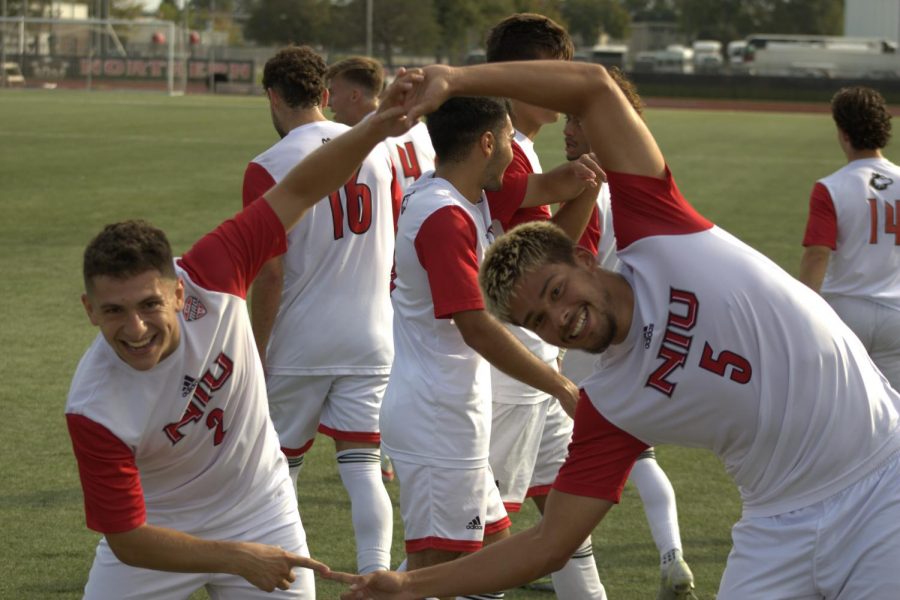 NIU came out of the gate early, controlling the ball for the first few minutes of the match.

Senior defenseman Anthony Markanich had a couple of good chances in the early part of the game but could not capitalize on any.

The first true scoring opportunity of the match came in the 7th minute when redshirt junior forward Enrique Banuelos headed a ball over the net, leading to a goal kick for the Mountaineers.

In the 35th minute, junior defenseman Adrian Lara netted a goal off a corner kick from senior forward Nick Markanich to put the Huskies up 1-0.

“Set pieces can be the difference, and obviously (Lara) getting his first goal of the year was huge for us,” head coach Ryan Swan said. “It changes the complexion of the game. It changes what we have to do and what they have to do going into the second half.”

The Huskies finished the half with seven total shots and three on goal. NIU held the ball for 48% of the half. The Mountaineers could only muster one total shot with zero on goal. West Virginia held the edge in possession at the half with 52%

In the 49th minute, Martin Sanchez made a huge save for the Huskies as he slid in front of WVU sophomore midfielder Ryan Crooks’ open shot to keep the score 1-0.

“The guy went through and tried to open it a little bit,” Sanchez said. “Just in case they don’t, and they come to the rear post, I just keep my feet dragging, and luckily, he hit it towards my feet.”

In the 66th minute, the Huskies once again had a prime chance to score as Anthony Markanich missed a header in the box that sailed to the right of the goal and was cleared by WVU.

Only a minute later, on NIU’s side of the field, Sanchez came up huge for the Huskies as he dove to save a shot towards the bottom right of the goal by WVU redshirt sophomore defensemen Bjarne Thiesen.

Throughout the match, things got chippy between the WVU coaching staff and the officials as the Mountaineers were arguing inconsistencies in foul calls.

With eight minutes remaining on the clock, Banuelos had a chance to put the game away for Huskies as he received a bouncing cross leaving him one on one with the goalkeeper. Banuelos whiffed the kick, and it was cleared by the Mountaineer defense.

Sophomore midfielder Eddie Knight put the game away for the Huskies in the 88th minute as he chipped the ball over the goalkeeper’s head to make it 2-0.

“Our communication has been the key to our success this season,” sophomore defenseman Harry Jolley said. “We will enjoy this win today and then we will get back to see what we did wrong and how we can right it.”

The Huskies will be back in action at 7 p.m. Saturday in DeKalb as they take on the Bowling Green State University Falcons.